English Rugby star Danny Cipriani talks about a2- a different type of cows milk which can help beat milk intolerance.

on May 26, 2015
I know Danny Cipriani talked about A2 milk because the invitation I received told me he was going to.

To be honest it was hard enough to tear my eyes away from the picture of him half naked with milk dribbling down his impressive bod to read the invitation so I knew meeting him in the flesh (as it were) was going to be exciting. 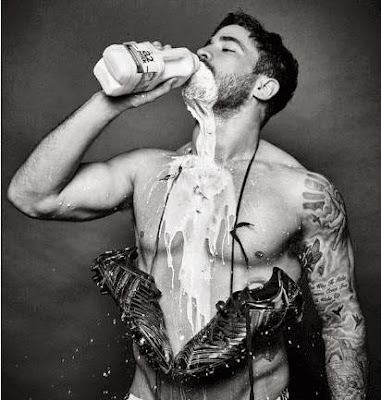 Yes he is as pretty as he looks in the gossip mags and the back pages of the newspaper. For the first few minutes as he spoke all I heard was the refrain of the old Carpenters tune going round my head: "Why do birds suddenly appear....."

But as a professional I realised that gazing at Danny whilst scoffing delicious hot chocolate and baked goods from the very lovely SAID Italian cafe (Broadwick street,Soho) was not going to help people suffering with milk intolerance issues so I pulled myself together and paid attention.

Lucky I did as nutritionist Melanie Bulger was giving an interesting talk about how a2 milk differs from "normal" milk -it's all about the protein which experts realised could make lots of difference as to how people with intolerances react to milk.

Here's the official science-y bit from the a2 website:

a2 Milk is 100% natural fresh cows’ milk which you may find easier to digest than regular cows’ milk, here’s why.Cows’ milk contains different types of protein – including ones called A1 and A2. These two proteins digest quite differently from each other and, for some people, the presence of A1 protein can result in discomfort after drinking milk. It was thanks to Dr Corran Mclachlan back in 1997 in New Zealand that the impact of this difference in proteins was discovered and the a2 Milk Company was born.

So in the UK dairy cows are mixed - some might be a2, most are a1 and the milk we buy is usually from mixed sources whilst a2 milk is only taken from a2 cows.  Drinking milk from a2 cows can mean an end to bloating and digestive problems (including toilet issues!) for many people who are not allergic to milk but intolerant to it.

My teenaged son had just such an issue - unbeknown to me he had cut milk out of his diet completely and only confessed this last year when I first heard about a2 milk.

I asked him to try a2 and he was very nervous at the prospect. He even waited until he had a free day so he could stay home if the usual reaction occurred but after a couple of hours with no digestive disasters he happily went out with his friends. You can read more about this experiment here.

I too have issues with milk. I love it and used to drink literally pints each day but found as I got older I started to have issues with bloating and a dodgy tum. This made me very careful about what I chose for breakfast on days I had to leave the house.

Danny Cipriani who currently plays for the Sale Sharks and England apparently had similar problems which created real issues for him as a top-level sportsman. He was having to mix his protein drinks with water and really missed the health benefits drinking milk brings so finding he could tolerate a2 milk has really changed his life.

This was all very interesting but Danny and Melanie were preaching to the converted somewhat.

What was news to me however was that although there are of course lots of milk alternatives on offer in health food shops and supermarkets, none of them are actually cows milk so don't taste the same and usually have lots of additives. (Check out the side of the cartons and you might be as shocked as I was.)

Melanie assured us that  a2 has just one ingredient - milk. 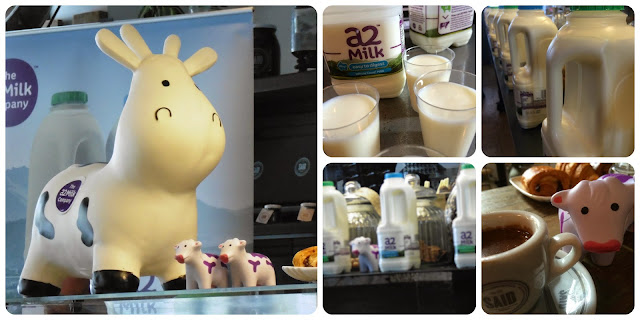 I have friends who buy specialist milks like soy, goat, rice etc but what I like about a2 is that it looks like milk, smells like milk, tastes like milk -IS milk and the whole family can drink it whether they are intolerant or not.

Fancy trying it? You can buy a2 milk in a semi-skimmed or full-fat version from most leading supermarkets. Drink straight, add to shakes and hot drinks or use it to cook with in any recipe which calls for milk! 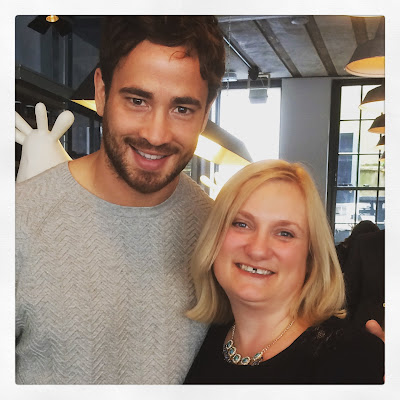 Disclaimer: I was invited to a pop-up a2 cafe to meet Danny Cipriani, to hear about a2 milk and received a goody-bag containing a sample of the product.