All Age Fun For All at Drayton Manor Park

on June 09, 2018
It's tricky when you are looking for a family day out to suit all ages. What on earth can you do which will be enjoyed by toddlers, tweens, teens and adults alike? And will cater for thrill seekers and this looking for more sedate fun? And which caters for those with SEN and other additional needs? 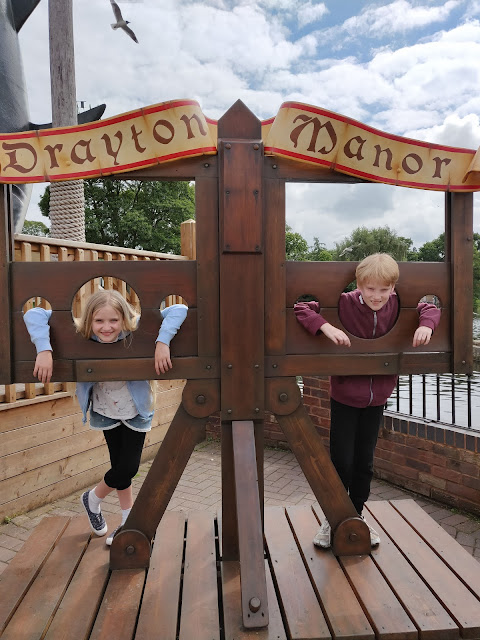 As a family we love theme parks but most we have visited cater more for one group than the other. We were pleasantly surprised to discover that Drayton Manor Park in Staffordshire has just about the perfect mix so the entire family from babes in arms up to Granny can enjoy a day out together.

I last visited the attraction when I lived in the Midlands decades ago.  I've not really considered going now I live in Hertfordshire but actually the trip was easy, mostly dual carriageway and motorway, and in under 2 hours we arrived - I've sat on the M25 longer trying to get to other parks!

Car parking was simple and free and even though we had to pick up tickets we were in the park within about 20 minute.

Top Tip -cut queuing time down by ordering online in advance and choose the E-ticket option.

The park opened half an hour before the rides started.

Thomas Land is right by the entrance and many families with children Thomas'd up to the eye-balls headed straight there. We decided that we'd split up for some of the day -the thrill seekers would go one way towards the towering frames of the multiple white knuckle rides while the less brave souls would explore the rest of the park and the zoo. 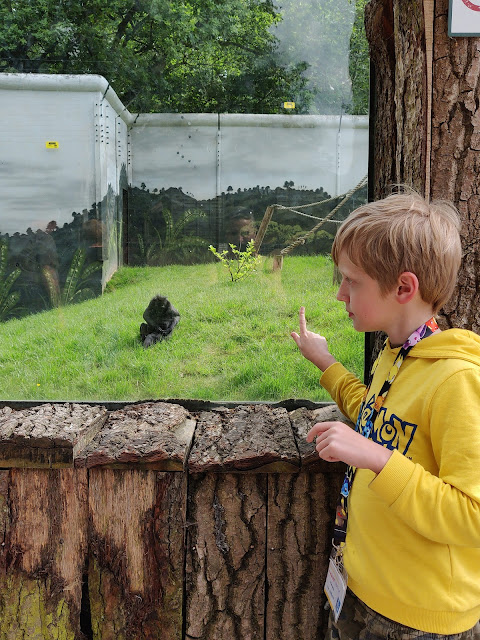 They disappeared and we made Guest Services our next stop to pick up a carer's card and wristband for our son with ASD who doesn't cope well with crowds and queues. This allowed us to avoid queuing ten times during the day - your card is punched every time you use it. You can use it multiple times on the same ride with each turn using a "life" on your card.

Actually most of the rides he wanted to go on didn't require use of the system as queues were quite light even though it was a dry Saturday in half term with a nice mix of sun and cloud. I expected the place to be rammed!

It was very handy however for the water ride, Stormforce 10, where the queue would have been 90 minutes in cramped walkways, sometimes in echoey passages which we know would have caused him a great deal of stress and anxiety. 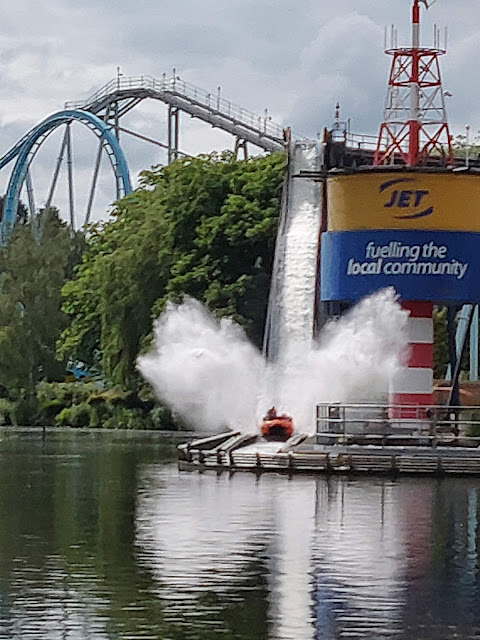 We also used it for the Troublesome Trucks runaway coaster - a rollercoaster with some exciting twists and turns but no upside down action, in Thomas Land and and for Winston's Whistlestop Tours, an elevated but gentle car ride over Thomas Land.

Top Tip - don't forget to bring your proof of need for an access band.

For this Drayton Manor Park accepts:

By the way, you don't have to be a Thomas fan to enjoy the rides at Thomas Land. 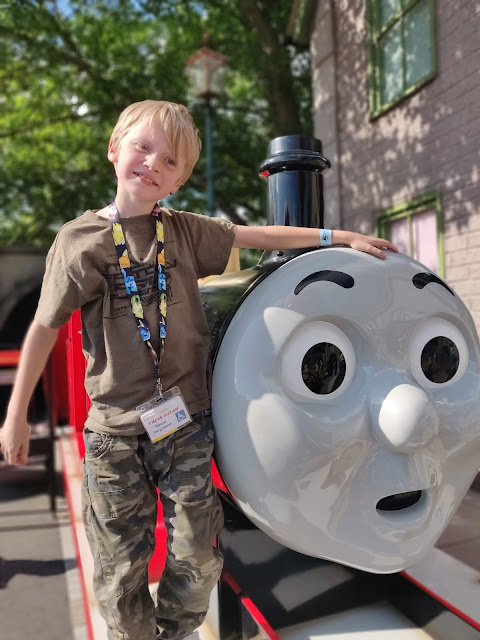 Although it is obviously very themed, most of the rides are just a variation on the usual theme parks rides and my son who is not actually very interested in Thomas really enjoyed flying planes, a spin and tilt ride and a roundabout in which the "balloon baskets" rose into the air while we whizzed them round using a central steering wheel like the popular teacup rides. 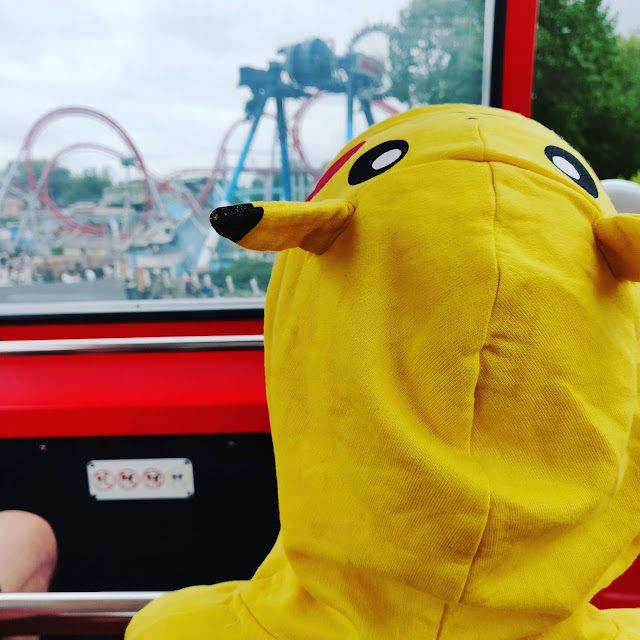 We touched base with the older children regularly and meeting for an early lunch they recounted their adventures.

Lunch by the way was very nice - we opted for lunch at the Chicken Diner where an adult meal with a drink cost £7.95 while the children's meal was £5.95. You could buy a family deal for two adults and two children for just under £25 or buy individual items like curly fries. 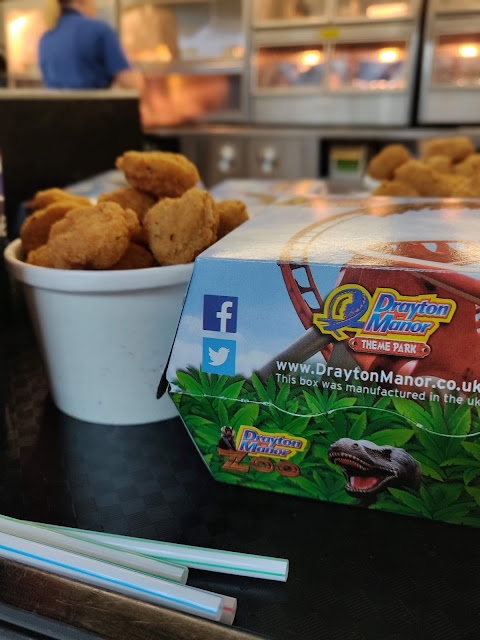 There are lots of food options ranging from concession stands selling ice creams, popcorn, drinks and hotdogs up to sit down restaurants. There's a pizza and pasta place, burger kitchen, coffee shop, a pub and a fish and chip shop to name just a few.

Top Tip -go for lunch before 12 or after 2pm to avoid the busiest time or take a picnic and store it in one of the lockers.

After lunch the older children dragged Dad off to experience some of the more adult-focussed rides, many of which involved going upside down.

I headed off with two of the children to the 4D cinema where we very much enjoyed an all action Ice Age adventure with rocking seats, water sprays and chilly air making us feel like we were right there with Scrat and the other characters.

My only slightly disheveled husband rejoined us and we decided to explore the zoo with our youngest son. We spotted a sleepy tiger, lots of apes and other tree dwellers including my son's fave ring tailed lemurs. He also rather liked this chap who had a very cool hair style! 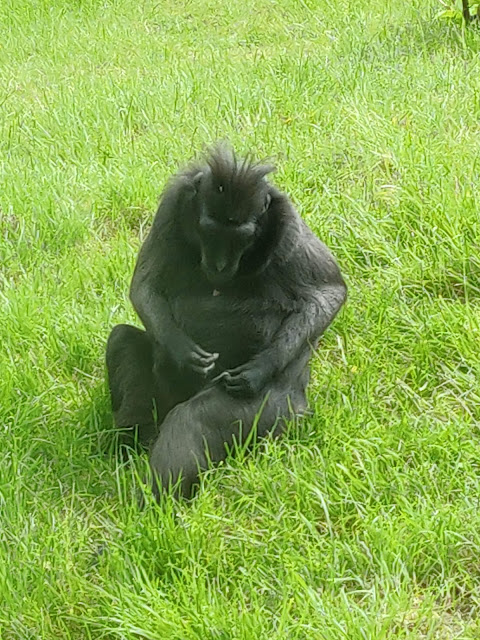 I enjoyed a quiet moment on a sunny bench while the boys headed inside the reptile house to see the snakes (I don't mind them but my feet need a rest) then rejoined the rest of the family.

We had a lovely day with no real complaints about the staff, park or facilities.

Negatives.
To use our carer card we did have to enter the rides via the exits which were not always easy to find and didn't generally have places to leave our Maclaren Major Elite SN buggy without them being in the way. The other option was to leave it in the buggy park which was often quite a way from the exit.

I was not impressed by the number of pay to play stalls and other attractions. To be fair these seem to be common at most attractions but at Drayton Manor Park there seemed no way to avoid walking past them.

My son with ASD is Pokemon obsessed and was distraught that we couldn't win one for him even though my daughter tried repeatedly. I wish we had the option to just buy the flipping Pikachu which would have been cheaper than trying to win it! The other children understood that we don't have the budget to spend on top of admission price but it's harder for him to get it. It almost spoiled the day as every time he saw the stall he started crying again.

Positives
I was impressed with the toilets, many of which had toddler sized seats built into the lids. Drayton Manor Park also have brand new accessible toilets and a changing room with a hoist, shower, hand basin and hydraulic bed. (You have to bring your own sling.) 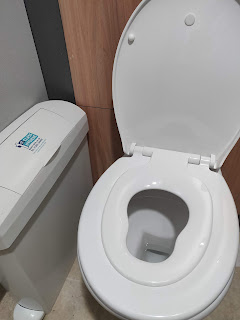 The park is actually quite compact so it never seems too far to walk between rides. There are plenty of places to stop and sit, some with lovely views across the lake.

I liked the fact that picnics are welcome but actually thought the food was reasonably priced and good quality, especially for a theme park. Soy milk was available in the cafe in Thomas Land.

All in all we give Drayton Manor Park a big thumbs up and would definitely head up north again to enjoy another family day out. 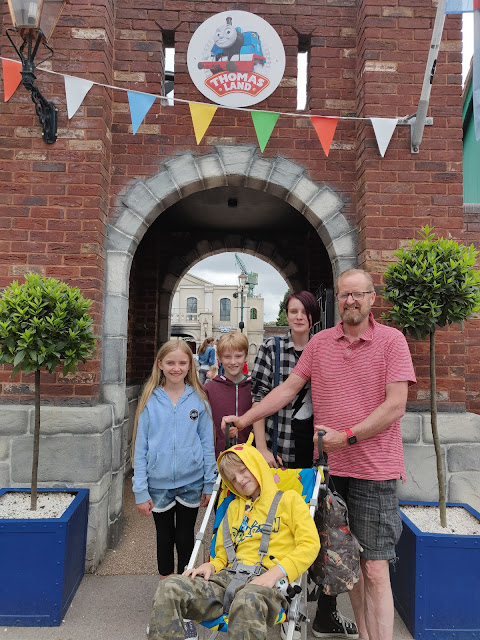 Disclaimer: We enjoyed free admission to Drayton Manor Park for the purpose of this honest review.