7 kids = season ticket to the Accident and Emergency Department.

on January 29, 2013
I was at a coffee morning yesterday. I know, no earth shattering news there. But since my tribe are rapidly growing it's rare I go to a coffee morning now where there are herds of toddlers. 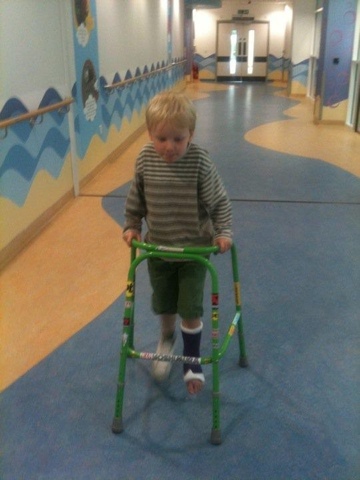 I didn't mind- I didn't have anyone small to watch and as parents know, while you can actually feel your own children's cries as a physical thump to the stomach, everyone else's wailing is just white noise.

So I parked my cuppa behind my handbag so no one could kick it over and smiled benignly as the small people battled over Peppa Pig, biscuits and trains and tripped over thin air.

But then one little girl let out a blood-curdling shriek. She was near the door with her brother who was enthusiastically slamming it and we figured she must have got her fingers trapped somewhere. Ironically her mum had just taken the slam guards off to prevent the tiny tribe decamping upstairs.

It was so unlike this little girl to cry so loudly that we all had a good look at her hand. Four or five mothers weighed in with opinions and arnica and soon she was soothed and playing happily without the need for hospital attention thankfully.

We swapped hospital horror stories for a while and as you can imagine I could have bored them for hours with mine- because 7 children ( five of whom are boys!) equals an awful lot of hospital visits.
Add to that one sickly child who spent a great deal of time in paediatrics and I can tell you exactly where is best to park and which hospital has the best cafe.

I remember one year with ds#2. Hang on, I recall telling you on day one you wouldn't hear much about him but he keeps popping up doesn't he?

Anyway, one summer when he was about 3 he was playing in the garden with his older brother and I was sitting on a bench enjoying the sun. He came up to me and opening one grubby fist said; "Look mummy, sweeties!"

The "sweeties" were berries from the Yew tree, planted in our garden by my late MIL. My elderly neighbour was in her garden and since I know absolutely nothing about plants I asked her if they were dangerous to touch, lick or ingest. "Ooh deadly poisonous!" she informed me with some relish. So I asked DS. Had he eaten any, or put them in his mouth at all. "Yes.. No, yes, no, no" was his panicked response, not really sure what the answer was supposed to be.

So off to A&E we went for some observation time. He hadn't eaten any and was fine.
Not two days later I was loading our dishwasher. I had just added powder to the dispenser and closed it when I spied a glass across the kitchen. I grabbed it and turned round to see ds#2 with a handful of powder and traces of it all round his mouth. Another trip to A&E where they made me feed him pints of charcoal water.

Then literally a week later I caught the same child crouched next to the toilet. He had fetched a flannel and cleverly using the scientific theory of osmosis had put one end in the water and was sucking the other end happily drinking the chemically enhanced blue water.

The triage nurse thought it was hilarious and said he would be fine-apparently they have lots of children in who eat the whole cake of toilet block and live to tell the tale.

But the next day my local health visitor called. " Hello Mrs Willmore. I heard your son has been in a few scrapes recently. Are you coping?"

Well yes I was coping, and went on to cope with a lot more A&E visits with rashes, broken bones and sprains. I am less prone to dash to the hospital now- in fact on one occasion I nearly didn't bother with the child ( again ds#2!) who fell off the playground monkey bars and was complaining of pain in his arms. Good job I did go to the hospital as he had broken both arms badly!

My most recent visit was a whole five months ago ( crossing everything now in the hope I haven't jinxed myself) when within hours of arriving in Cyprus DS#3 injured his toe so badly he needed stitches and I spent much of my holiday and many euros trying to fashion some efficient foot cover so he could enjoy the sea and pool!

But I don't dash to casualty with every bump or scrape like you tend to as a new mother. Arnica and TLC is generally all the injured child needs but still, if you want directions to the best hospital cafe in the UK ( or Cyprus) I'm your woman.