on January 28, 2013
I had a chat with a reporter today. He contacted me via Twitter and sent me a text to arrange to interview me over the phone. He apparently finds my blog "very entertaining" ( glad someone does!) and wanted to talk to me about it.

I used to be a journalist. I fact I used to work for the same newspaper as the chap who contacted me today. But the way I worked even just 25 years ago is very different to the way modern reporters collect news and create newspapers today. 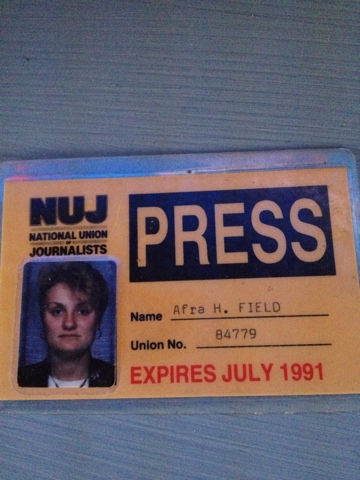 I finished my initial training in Cardiff in the late 80s and started an apprenticeship at the Berrows Worcester Journal, the worlds oldest newspaper still in print today. I remember my first day at the office. My Editor, puffing on a large smelly pipe ( in the days when smoking indoors was quite acceptable) showed me round the office.

There was my phone, my typewriter and most impressive to me, a fax machine, singing its happy little fax tune- that buzzing, cheeping, beeping noise which will be well known to anyone over 30.
I was happy to see the typewriter was a modern model which used clean carbon paper not the inky black stuff, but we still had the vicious spike to store a second copy of each story on which I'm sure would be banned by 'elf n safety nowadays.

As I am not actually that old, it wasn't long before a computer was installed on my desk. We had, I think, a whole hour of computer traning at Cardiff so I was keen to play with it. But before I could reach for the "on" button the Union guy hurtled in and warned me in no uncertain terms not to touch the evil device before he had negotiated extra money to compensate for our new skills. Now that dates me doesn't it- unions with power!

So the management said no. So we went on strike! For a whole hour! I sat in the pub with my fellow strikers feeling both rebellious and terrified I would end up losing my job over the computer I was dying to use! But the management caved, worried the readers( and advertisers) would abandon us if they missed out on a weeks worth of parish council news and the detailed price of lambs at the market, and I got my extra £1 a day or whatever it was.

My average day started with a walk across the bridge over the Severn to catch up on the overnight news from police, ambulance and fire crews. They teased this young, keen but green reporter mercilessly. I was exposed to sexist jokes and bare bums and probably nowadays would be encouraged to sue but it was the nature of the industry then and I took it in my stride and was rewarded with their trust, loyalty and bacon butties every morning.

Later in the day I would take the car and tootle round my "patch" finding news on notice boards, in cafes, galleries, shops and pubs. Or I would head for face to face interviews with people, or to council meetings or court. I did theatre reviews, enjoyed "jollys" and classed as a minor local celeb attended gala lunches and judged competitions!

I have met most of the major Royals and a host of celebrities. Most of whom are probably dead now.
Memorably I once interviewed Nanette Newman. ( Google her if you are young!) I knew her as the face of Fairy Liquid. I rambled on about washing up liquid and the role in the play at the provincial theatre we were sitting in. Her husband had joined her - Bryan Forbes. You may have heard of him? I hadn't. To be fair, I've never been a film fan.

I had my time then the next reporter stepped up. And talked to them both about International Velvet, The Colditz Story, The League of Gentlemen, Whistle Down the Wind, The Railway Children and a host of other notable works from their careers.

Mortified I started scribbling and totally copied the interview from this better researched film buff of a reporter to craft a feature on the pair! The other reporter earned a pint and neither my Editor nor his ever knew!

Maybe if I'd had access to the Internet I would have been better prepared. But this was before www and dot.com and email. It was the time when mobile phones were not very mobile as they were the size of car batteries and Atari was the games console of choice. My 18 year old self thought windows were clear panes of glass set into buildings and had never heard the word Blog.

But I still don't envy the journalist I spoke to today. I think maybe I enjoyed the perks of the last of the glory days of the British newspaper industry which was then the envy of the world.

Although being largely office-bound like most modern journalists might have its advantages. The reporter I spoke to today will probably never be stuck like I was once in a searingly hot room which was decorated for Christmas in July being urged to drink hard liquor in vast quantities by a mad old man ranting about the worrying increase in traffic lights in his town.

I sat pretending to sip from a grubby mug of whiskey, staring at the brown, dead, bare Christmas tree and faded, dusty Christmas cards and wondered how long it would be before someone in the office sent out a search party. Or if indeed I had written the address if the house I was trapped in into the office diary? Ah, those were the days!