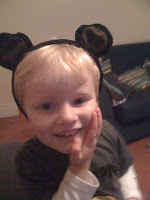 One of my children has a birthday tomorrow. DS#4 is eight tomorrow and like most mothers the birthday of one of my babies got me reminiscing about his birth.
I had 3 boys and 1 girl before him and so the pressure was off to produce a girl or boy. It was before I developed Fibromyalgia and diabetes so although the pregnancy was officially high risk ( fifth pregnancy, fifth Caesarian booked and mum aged over 35) it was still relatively straight forward.
I must confess it was strangely satisfying being a bit of a celebrity in the hospital. I knew most of the staff, was very familiar with the routine and after an initial squabble with an unsupported and offensive male consultant we swapped to another ( female) who was happy to schedule my fifth cs section as she knew we had consulted doctors before TTC ( trying to conceive) and had the go-ahead, albeit with the usual disclaimers, from our original consultant.
I must interject here to all those thinking " You can only have three caesarians." Well, obviously that's not true-I've had seven. But I took medical advice with each baby -after the first obviously-and because I was luckily enough to maintain a reasonable BMI, had few adhesions ( bits of your insides sticking to each other, common with surgery) and my scars, internally and externally healed well my consultants let me expand my family. I certainly would not advocate anyone just TTC after more than two cs sections without taking medical advice first.
Anyway, back to DS#4. The pregnancy went relatively smoothly and the scheduled section date approached. I always was admitted the night before and as I made last minute checks to my bag in the morning I glanced out of the window. And saw it was snowing. Not just a few swirling flakes. Proper, batten down the hatches snow deepening by every minute.
Luckily living where we do we have quite a few friends who drive four wheel drive vehicles and one of them was way ahead of me and within ten minutes of me spotting the blizzard had rung and offered her off road driving skills to get me to the hospital 12 miles away if necessary.
The hospital called for me to go in early and after a hair raising journey I was admitted and settled on the ward. DH had to leave almost immediately to get back home to the other children with promises that I was not to worry - Linda and her Toyota Land cruiser were all primed to get him back in the morning in time for my surgery.
It was surreal looking out of the ward windows that night. Unsurprisingly with several pounds of wriggling baby, nerves and the usual pregnancy niggles I could not sleep so I paced the corridors watching the snow fall in the orange glow of the streetlights lighting car parks which were unusually empty. Staff had assured me there were enough doctors and midwives staying on site to make sure the section would go ahead so at least I didn't have to worry about that.
Morning came and DH arrived in plenty of time under his own steam as thankfully the roads had been cleared. A gorgeous copper haired midwife escorted me down for the spinal block.
I had been asked if I would be prepared to allow some experimental surgery techniques and found myself being covered in bubble wrap with warm air blowing through it. Lovely as operating theatres are generally freezing cold. A machine was waiting to take blood sucked out of my insides, warm it and put it back through my arm. A crowd of fascinated medics from hospitals far and wide lined the theatre. Unnerving when you are lying conscious but naked from above the waist, downwards. Luckily no-one laughed and pointed.
Then I heard the consultant say to me "If you could just be quiet for a minute, your son is about to be born."
And before I got a glimpse of my precious baby, a theatre nurse at my lower end exclaimed :"Oh no- he's ginger!"
The beautiful flame-haired midwife and I exchanged horrified looks and gasps. I didn't know whether to be more offended for myself or for her!
Then my strawberry blonde beautiful boy was handed to me and I just laughed.
The hint of ging has pretty much gone now but his nickname, Ginger Fat Boy, has stuck  He is neither ginger nor fat but you know how long these family jokes can go on.
Tomorrow we are taking my lively 8year old out shopping and for lunch. He will eat his own body weight in pizza, no doubt talking non-stop. It seems a long time ago since he was a bundle in my arms.

I hope reading my story of just one of my deliveries has brought back happy memories for you if you are a parent. Feel free to post your own humorous birth anecdotes  via the comment box below!