The difference between need and want

on April 19, 2014
I'm going to that big blue and yellow Swedish store this week. A friend wants some odd shaped plates for a dinner party and we discovered that Ikea stocks just what she wanted at a reasonable price. So we planned a trip.


Now other women will understand that it takes three of us to go and pick up these plates. We decided to go during the evening so we wouldn't have to drag children along. So there's one friend who needs plates. She doesn't drive so I volunteered. And then there's our other friend who is coming along for the ride.

This third friend informed her DH of our plans, to ensure he came home from work promptly to take over as parent-in-charge. With a hint of a smile he told his wife that he didn't understand why she needed to come with us as they didn't need anything from Ikea.

Well that might be true but there's a big difference between need and want isn't there?

My children always "need" that new toy, a chocolate bar or the latest version of collectable cards with football players, furry monsters or aliens on. I always "need" candles. And DH always "needs" just about anything from the DIY store.

Of course we really only want this stuff, but sometimes the wanting is so strong it's akin to need. Ask most woman with PMT whether she wants or needs the chocolate she's stuffing down her face and I think she's be hard pushed to give you an answer.
Actually, don't ask - you might find she answers you with a mouthful of abuse and a swift, sharp slap. 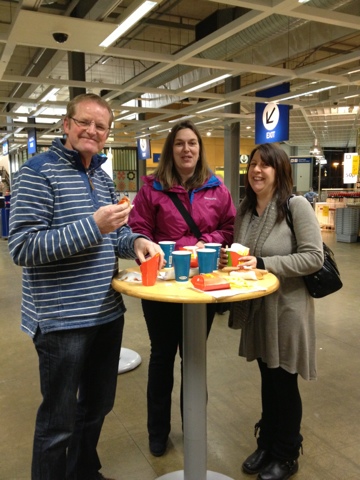 Has anyone else spotted something on TV, or in a magazine, or in a shop then obsessed about it until they own it? DH spends hours poring over websites selling powertools for so long it's unhealthy. My handbag craving is well documented. And I have a couple of friends who dream of being let loose in Hobbycraft and Staples. I know, I have odd friends.

Like my friend, at the moment I don't actually need anything from Ikea. But I'm fairly sure that, like most times I go, I will come home with something either candle or meatball related!

Pictureshows DH, and my friends Jane and Claire enjoying the delights of the Ikea Bistro. Jane and Claire feature heavily in my blogs as they tolerate my madness with grace and humour. Between us we have 15 children.