on May 03, 2013
I am in Cyprus at the moment visiting my mum but thanks to the joys of the www I am sitting in her lovely garden with my laptop listening to some very noisy birds, watching the lizards scurry and waiting for my coffee and hot cross bun.
No I haven't gone mad - its Easter weekend in the Greek Orthodox calendar so I picked some buns up in Tesco just before we left so mum could have a taste of English Easter before we go down to the harbour and watch the Cypriots mark Good Friday in their way by parading a flower-decked bier around the streets.
Anyway, today was a beach day. The beach we favour is Ladies Mile which is a hidden gem down what used to be nothing more than a dirt track through the salt plains.
Recently the Cypriots found some tarmac somewhere and improved some, but not all of the track.
About three quarters of the way down we saw a sign.
Now it's been a very long time since I took my driving test and I'm ashamed to say recently having a go at the app which lets you take a theory test I failed but both me and DH agreed this sign looked very much like "end of motorway"
What made it even funnier was coming back down this "motorway" we had to pull over for a huge herd of goats which appeared to be being led by a small dog with no human in sight!
I'm no expert but I think they were just common or garden goats, not the protected and rare mouflon. Either way, much like when I see cute lambs at home, all I think when I see them is; "Mmmm. Pass the mint sauce."
We decided to head home via the old road - which we managed apart from a slight loop round Episkopi - and in fields near Pissouri we spotted an unusual crop. 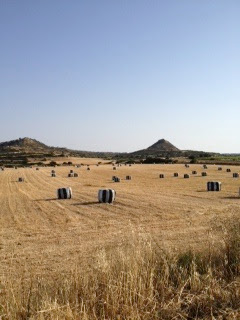 This might only make sense to UK residents of a certain age but does anyone else think this picture on the right looks like the farmer is growing giant everton mints or humbugs?
We only saw the bales wrapped like this around this village so maybe its a farmer with an artistic bent or who really really likes sweets?
As we followed the curves of the hills towards home we had a wonderful view of the sea round the Island of Love.
We stopped on the road near Petra Tou Romiou or Aphrodites Rock, supposedly the birthplace of the Goddess of Love. Legend has it that if anyone who swims round the rock in a particular way will be blessed with everlasting beauty. Put it like this, I don't swim too well so DH is stuck with the unblessed version.
The sun was just starting to set and with my trusty iphone I took a quick shot which by no means does the atmosphere justice but I hope it gives you a flavour. 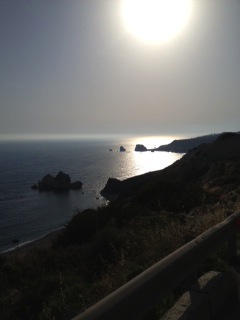