I HAVE just picked up some friends from the airport and my little jaunt down the M25 to Heathrow was not too much of a chore because I love going to the airport! 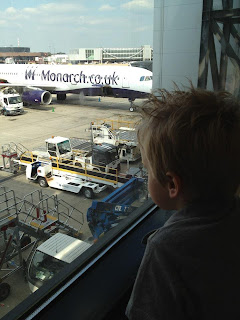 My friends along with others from our Team Parish had been in Kyrgyzstan helping to build houses (trip organised with the Habitat For Humanity organisation) and came through the arrivals gate hot and weary after a 17 hour trip to find there two chauffeurs waving and smiling (although equally hot!)
We had been watching the arrivals board and it had taken a while for their baggage to be "arriving" so I took the opportunity to do some people watching - my favourite occupation.

I didn't see any celebrities - but I wasn't surprised. I never spot celebrities and even when I know for sure one is nearby I always have trouble recognising them. Seriously, the Queen could be in front on me in the queue at Tesco ( unlikely I know) and I wouldn't recognise her. I'm not alone - I gather she often walks her corgis round Green Park in London and in her headscarf and a tweed coat very few people recognise our Monarch.

I did see some characters though. I was particularly intrigued by the guy in a pilot uniform wandering around pushing a trolley with a couple of small suitcases on. He was gazing around looking quite bewildered as if he had never seen an airport before. I him out to the other "chauffeur" and we chuckled a little- then 10 minutes later I spotted the "pilot" making another circuit of the arrivals hall, still looking lost and confused. Maybe somewhere there was a plane full of passengers wondering where their pilot was....
Even better, a couple of minutes later I saw another chap in a pilot uniform complete with hat and gold braid. What made him interesting was his giant bushy handlebar moustache - Chocks Away Chaps! 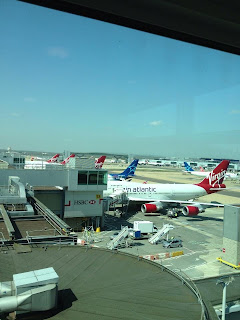 My odd mind wondered if it was "dress up like a pilot day" and I had missed the memo and I momentarily felt sad I had chosen to wear a boring old floral dress instead of a peaked cap and winged badges.

Then I played a short game of "guess where the arriving travellers came from".
Lahore was easy - lots of colourful saris and giant piles of luggage topped with interesting-shaped things wrapped in brown paper and bits of cardboard. But it was more difficult than you'd think to distinguish between the passengers from the next two arriving flights - Helinski and Istanbul. Mostly I saw blokes in suits talking earnestly into mobile phones. I did overhear one of the "suits" answer his phone with the words "Mission Control here." Wow! Maybe a spy? Or, more likely, a middle manager with a Mondeo and a big ego.

I was almost disappointed when our builders appeared through the doors , especially when none of them was dressed like a pilot. Spoilsports.