on August 07, 2013
I HAVE bought some odd things over the internet in my time but I think my recent search for "Smurf Hats" on that popular auction site was one of the weirdest. 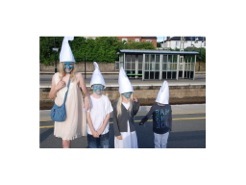 You might well ask why I was looking for Smurf hats - well we had been invited to see the new Smurfs 2 movie to celebrate the launch of a new toy range by Jakks Pacific and the PR contact organising the event had said it would be really nice if we felt able to Smurf up a bit. There were even prizes on offer for the best Smurfs!

So we had Smurf hats, I borrowed some blue facepaint and I sorted out a selection of blue and white clothes. At 6am on a sunny Sunday morning we woke the children up and turned them into Smurfs. For Grumpy this involved him wearing his sister's white skinny jeans complete with diamonds on the rear pockets - not that he seemed to mind- he wanted to wear them the next day as well!
We met my friend with her Smurfs at the railway station and headed into London. 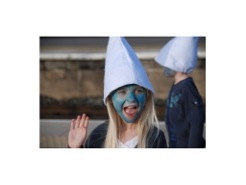 We got lots of curious looks travelling in and at Leicester Square McDonalds it all proved too much for one server who had seen us, and other bloggers with their costumed children, and as I ordered coffee (it was still quite early!) she leaned forward and: "What's with all the Smurfs?"

Waiting outside the cinema we proved quite an attraction for the tourists on the passing bus tours - wonder what their friends will make of those photos? Tower Bridge, Buckingham Palace, Picadilly, Smurfs....... 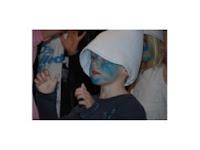 The actual event was amazing - the film worked well on all levels and so was great for adults and children to enjoy together. There was a tribe of blue-haired entertainers checking for Smurfiness and organising games and a nice display of the new toys. 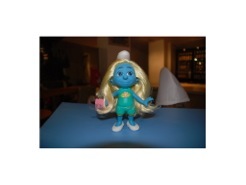 Now I have a confession here. I had not expected to like the toys. The words, "jumping" and "bandwagon" initially sprang to mind. But actually they were lovely. I particularly liked the Smurfette figurine.

DD (age 7) actually won a Smurf mushroom house toy (like a little doll's house) complete with Smurfs and accessories at the event. I have since seen it in Argos (on offer for under £10) and have to say having seen how much fun she and her friends have had with it think it would be a good buy.

Event over we headed off for some lunch. Walking through Leicester Square we attracted more curious looks and our waitress was most amused to be serving Smurfs-she even drew a blue smiley face on our bill!