on September 26, 2013
Now if you've been trekking in the Bolivian Jungle for the past few weeks you might not have heard - my three youngest children were picked to film an advert in London this week and I am one proud Momma!

It all came about through blogging contacts (did I mention I love blogging!) and after pictures and auditions we got the news that Grumpy, DD#2 and DS#4 had all been successful.
Then followed a mad few days sorting out stuff required by law for them to perform. 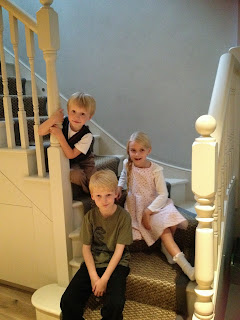 Our school is normally very strict and doesn't normally allow days off during term time but the Head was very understanding and issued the required permission letter.
Now I needed photocopies of the children's birth certificates which I keep all together in a safe place. Except I couldn't find one of them. Cue headless chicken day as I rifled through every piece of paper in the house hunting for it. Finally relented and paid almost £30 for a replacement only to, yes, you've guessed it, find the bogging original in the filing cabinet! Too late to refund -we now have a spare copy!

Next I approached the GP's secretary for their medical release forms to be signed. She breezily informed me there would be a 2 week turnaround - which meant I would get the letters 3 days after the filming date! A bit of pleading worked though and I collected the forms (and paid the fee!)

I assembled all the bits of paper and as time was getting on and they still had to go to our local borough council which issues the performing licence the lady at the ad agency advised me to scan it all and she would sort it out.
Easy. PC on, Printer on. Insert paper into posh printer which scans, copies and probably makes toast if you hit the right combination of buttons.

Some garbled technical message about a communications error. Panic and do more headless chicken impressions. Then remember friend has scanner thingy and ring for some more begging.
Friend's calm and technically able DH scans and emails papers for me and I breathe a sigh of relief.

A few days pass. Another email. The stylist needs to see 3 outfits per child plus two shoe choices each.
No stripes, loud patterns, branding, bright colours....
It turns out almost everything my children owns ticks one of the no-go boxes. A quick trip to a local clothes shop and a mound of ironing later we have our outfits - more pictures emailed across. Blistering silence is the reply so I'm guessing they were approved.

A couple of days before the shoot we get the location address - and I realise although in London, Wandsworth to be precise, it's not easy to get to using public transport. Especially not with three young children and a bag full of clothes and shoes.

So we scrapped the planned train trip and I decided to be brave and drive, trusting in God and my satnav to get me there on time. I decided to allow two and a half hours for the hour drive planning to give me plenty of time for the kids to eat and stretch their legs before performing. 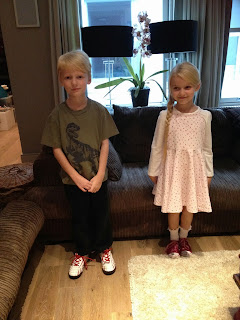 A hitch in the plan! The older children were delighted to discover that on D-Day they had a late start after the school open evening. Hurrah for my mate Claire who saved the day by offering to take them for me - when she arrived to pick them up I was once again doing my best headless chicken act, this time combined with a a bit of a blue-arsed fly on the side. Hurtling round in my PJ's re-ironing all the clothes which had been moved and dumped on a chair!

Last minute baths and hair washes all round and I was ready to programme the sat nag. Sorry, sat nav. But due to the joys of iOS7 when I turned my phone on the app was showing as "loading". Which with the sat nav app I use means "Give up an entire evening faffing on itunes deleting everything then install sat nav then reinstall everything, including music from DS's dubious collection. Then do it again just to be sure." Enter a selection of choice words here.

I had no choice- I had to trust that the free Google maps app would get me there and bless it, even though I had to make do with a dodgy synthetic American voice guiding me, it was awesome!

It took two hours but that was due to the blithering idiots who block roundabouts, park on narrow city streets creating bottlenecks and trailing endless traffic queues, and buses. Which frankly do what the F they like! 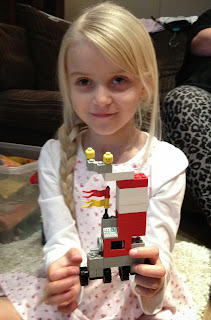 Amazingly I was able to park right outside the location. Which was in fact a house. I was going to type "just a house" but this was a lovely house!

Just time for a quick run about chasing squirrels on Wandsworth common- you'd think my children who live in a lovely rural village would not be too excited by the sight of a scruffy city squirrel but no - they reacted with more enthusiasm than when I took them to see rhino's at the zoo!

I won't bore you too much with the actual shoot  - and in fact I can't tell you much anyway as I wasn't allowed upstairs while they were filming. But I can tell you the kids loved the "green room" with toys and food and lovely squishy sofas to relax on and a slippery wooden floor to slide on.

They were treated like royalty by the crew who were so awesome at their job of making them feel relaxed that DS#4 came down after his first shoot saying:"That was fun - when are we doing the advert?" 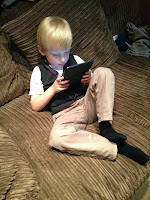 They said Grumpy was a bit quiet on his first run-through but once he got going they couldn't shut him up. And after her session with the stylist DD#2 looked even more cute than usual (OK I am biased but I think she's gorgeous) and  I could hear her sweet giggles from downstairs as she interacted with her brother for the cameras.

I sat downstairs with the other mums - I was amazed to learn my children were the only non-professionals - and I hit it off with one mum who'd brought her beautiful daughter all the way from Yorkshire for the opportunity.
She chatted about castings and auditions and plays and shows her daughter had been in. This devoted mother had driven thousands of miles to pursue her daughters career - she must be exhausted! I know I was after just one day! At the end of the day we battled back through the rush hour traffic and since I'd promised the children a treat we had our own "wrap party" at Mcdonalds on the A41. They were very excited by this as it was dark and everything!

This morning it was back to school and the only difference to a normal day was that DD asked me to do her hair in the elegant side plait the stylist had made look so easy. Half a can of hairspray and several clips later I managed a clumsier version and she went to school happy.

I am having a quiet day - I didn't do any "work" yesterday but four hours of driving in London traffic, even though in between I had hours of lazing around on sofas eating egg sandwiches chaperoning has left me needing a bit of a duvet day! 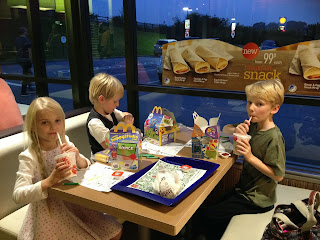