From Boy to Biker

on November 04, 2013
I sat in my car and watched the man pull into the car park. He pulled the bike into a space a few car widths away from me, didn't seem to notice I was watching him.

I felt a little rude, voyeuristic even, studying the man so carefully. Through his visor I could just about see his face, but could not really read his expression. He looked weary, to be honest, maybe a little bit worried. I worried a little bit for him.

He turned the key, silencing the bike. Sat a moment longer. Seemed to be composing his thoughts. He looked familiar to me, but then again, looked like a complete stranger.

Then swung his leg over the bike and walked away from me....... 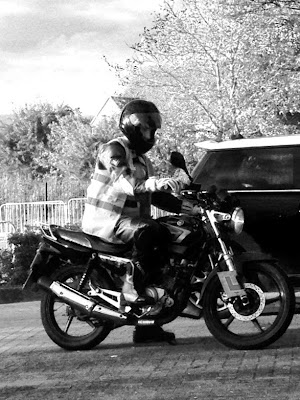 Odd behaviour on my part you might be thinking. Watching a man on his bike. But the man on the bike was my son. My 18 year old son who had just completed his CBT (bike training) successfully. I'm happy that it's one more (big!) step towards complete adulthood, complete independence.

As I type he's out, on his bike, with his friends heading for fireworks and fun in a nearby town without having to worry about buses or sorting lifts.

And although I'm happy for him, and extremely happy I won't have to drive out to pick him up later I'm really quite sad. Because it's one more (big) step towards complete adulthood, complete independence.