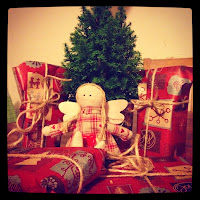 One of my favourite parts of the Christmas season is the food! So many opportunities to indulge in not-so-healthy treats and winter warming meals it's no wonder I've put on a few pounds already! But what I am more worried about is the £-pounds I could lose celebrating the season so, with friends, came up with a low-budget, minimum effort Christmas supper.

We usually go out for a meal to celebrate Christmas but the average price of a "festive menu" in pubs and restaurants in my area is around £30 a head before drinks this year. We like to take our DH's too which means we could be looking at almost £100 a couple! Yep. That's definitely not in our budget right now!
My friend kindly offered to invite us round for dinner instead but we felt that was not fair for her to shoulder all the work and expense. So we agreed to split the meal and the cost.

I took the starter and a vegetable side dish. Claire chose the meat, potatoes and sprouts and Jane offered deserts. We chose our crackers together and split the cost at the till. 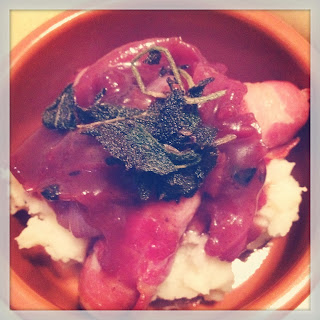 I had lots of fun scouring recipe websites for a cheap but tasty starter and ended up doing one based on a Jamie Oliver recipe.

I bought (cheat!) pigs in blankets (little sausages wrapped in beechwood smoke bacon), made garlic mash (added chopped garlic to warm milk then whisked it into normal mash) and made what I called Hot Christmas Chutney.

I pan fried sage leaves in garlic oil then removed onto paper roll.
Added thin wedges of red onion to the oil and cooked gently until soft.
Then bunged in a good dollop of cranberry sauce, nutmeg, cinnamon (could add a stick but I only had powder.) cooked for about ten mins then added a splash of balsamic vinegar and a dash of hot water and cooked some more.

The mash, sage leaves and chutney went into containers to reheat at Claire's. I cooked the sausages at her house and assembled the whole lot in cute terracotta dishes.

I also made red cabbage.
Added two sliced red onions to 25g butter and fry until soft.
Add a thinly sliced red cabbage (stalk removed)
Add alcohol! It was meant to have 150ml port and 150ml water. I didn't have this so took a chance and added 150ml water, 100ml rose wine and about 50ml mulled wine syrup (which had lots of christmassy flavours added like orange, cinnamon, cloves…)

I simmered it for a while but it still had a slight bitterness so added a sprinkle more of cinnamon, some cranberry juice and a fair amount of sugar to suit my taste and simmered for about an hour. Yum! My whole house smelled Christmassy with my mulled wine red cabbage.

When we got to Claire's she had decorated the table beautifully. We had agreed to just buy "table presents" this year and agreed a limit of under £5 per person. We each bought a gift for the other two girls and all three blokes - a total max spend of £25.

Claire and her DH had cooked the main meal together (my DH only cooks toast so I'm well jel) and produced a Lidl bird-in-a-bird (under £10 to serve 6 of us!) roast potatoes, sprouts roasted with balsamic vinegar (nicer than it sounds) stuffing and peas. We had home-made bread sauce, cranberry and mint sauces to accompany our meal.The mint sauce was for me - I love it on everything! 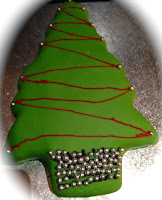 Jane made a fabulous Christmas tree sponge cake and bought a Christmas fruit cake and Christmas pudding. We had been shopping together the week before and in a weak moment in Iceland had also chosen not one but two chocolate dipping deserts with marshmallows, waffles, brownies and doughnuts!

We finished with cheese and biscuits (not me - I hate cheese!) and the obligatory mints. Claire had made egg-nog - my new favourite drink!
The whole lot was washed down with a variety of bubbly drinks, some lurid alcopops (we are teenagers at heart) and a rather nice merlot. The whole lot did not come to the £300 the same meal would have been if we had gone out!

It was a fantastic evening- we all ate, chatted and laughed around the table with some fab old seasonal hits playing in the background making it feel truly Christmassy. 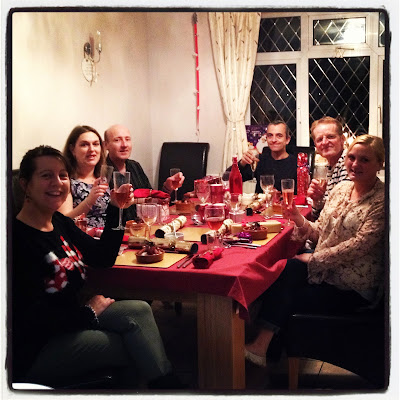