on January 03, 2014
It's taken a few days for me to be able to write about this. After months of preparations, baking, feeding, marzipanning, icing, decorating I was really hoping to tell you that my cake was victorious in the competitive Christmas cake competition.

I was sure that my 1979 Good Housekeeping recipe would beat all modern newcomers and the blend of not one, not two but three different types of alcohol would prove a winning combination.

Anyway, before I reveal the full final results I thought I'd share some details of the final. If you have no clue what I'm talking about you might want to read my first post about the Christmas Cake competition here and my second post here.

Originally there were only two competitors in the competition but after much joking around, and fight-talk about our cakes, we managed to persuade another three of our friends to enter their cakes. And even on the actual night of the final we had a last minute entry from friends of our friends who had been invited along to see in 2014 with us.

We arrived nurturing our entry slice of cake which was quickly plated and numbered for our judge - the friend of a friend who drew the short straw simply because she once did a cake-related cookery course and was slightly less able to identify the cakes than the rest of us! 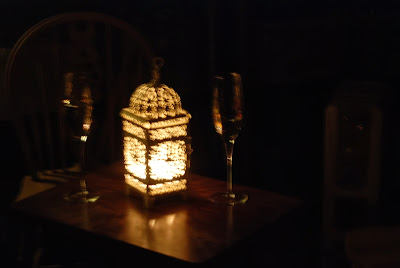 Our hosts for the New Year celebrations ushered us into their cellar which they had decorated with French flags, candles and little tables - it felt like a meeting of the Resistance or some underground secret drinking club! They had organised a wine tasting session to start our evening - enormous fun particularly as I don't hold my drink well so after a pre-party Pimms at a friends and wine tasting samples (large samples!) 1 and 2 I was pretty much hammered, despite the tray upon tray of lovely canapés which I happily consumed.


Dinner upstairs followed and as we were choosing between two fabulous puddings (the making of which also seemed to have turned into a competition!) the other guests arrived with their cake slices.

There was just time to see in the New Year with champagne, Auld Lang Syne and fireworks and sparklers before we headed back underground for the actual judging.

The judge sliced the cake samples, checked aroma, nibbled, made "Hmmm" noises and went back to my cake for a second taste - I felt briefly hopeful until she shook her head and said the damning words:"That one doesn't even taste like a Christmas cake."

Well I was crushed! I thought her judgement was a bit harsh but still maintain that the Good Housekeeping recipe is just as good as the winning cake which was based on a Delia recipe.

But congratulations to the winners who were very graceful in their acceptance of the crown - I recall some whooping and screeching and a rather long victory dance round the cellar but well deserved and if I'd won I was have been equally boastful  gracious.

Already plans are afoot for an Easter simnel cake contest and another Christmas competition which may be a repeat of the cake, or maybe we will try a Christmas pudding or chocolate Yule log contest.

Whatever, it was enormous fun and I can recommend it to anyone. Only another 350-something days to go folks.....