on April 07, 2014
Back in the 80's there was this little rebellion in the world of comedy - a small bunch of funny people decided that instead of making jokes about race, weight, gender or Mother-in-Law stereotypes that they would be a little "alternative."

And so alternative comedy was born - which is now just known as comedy! Among the group that pioneered this form of comedy was Ade Edmondson - and I was a huge fan! The Young Ones, Comic Book Presents and Bottom - if you are my age you are remembering and nodding your head in recognition. These programmes might seem unsophisticated but they paved the way for the superstar comedians of today.

So imagine my delight, nay hysteria, when an email landed in my inbox inviting me along to an evening event being organised by Merry Down cider during which Ade Edmondson would cook for me! (well a load of us but in my head it was a more intimate event!) 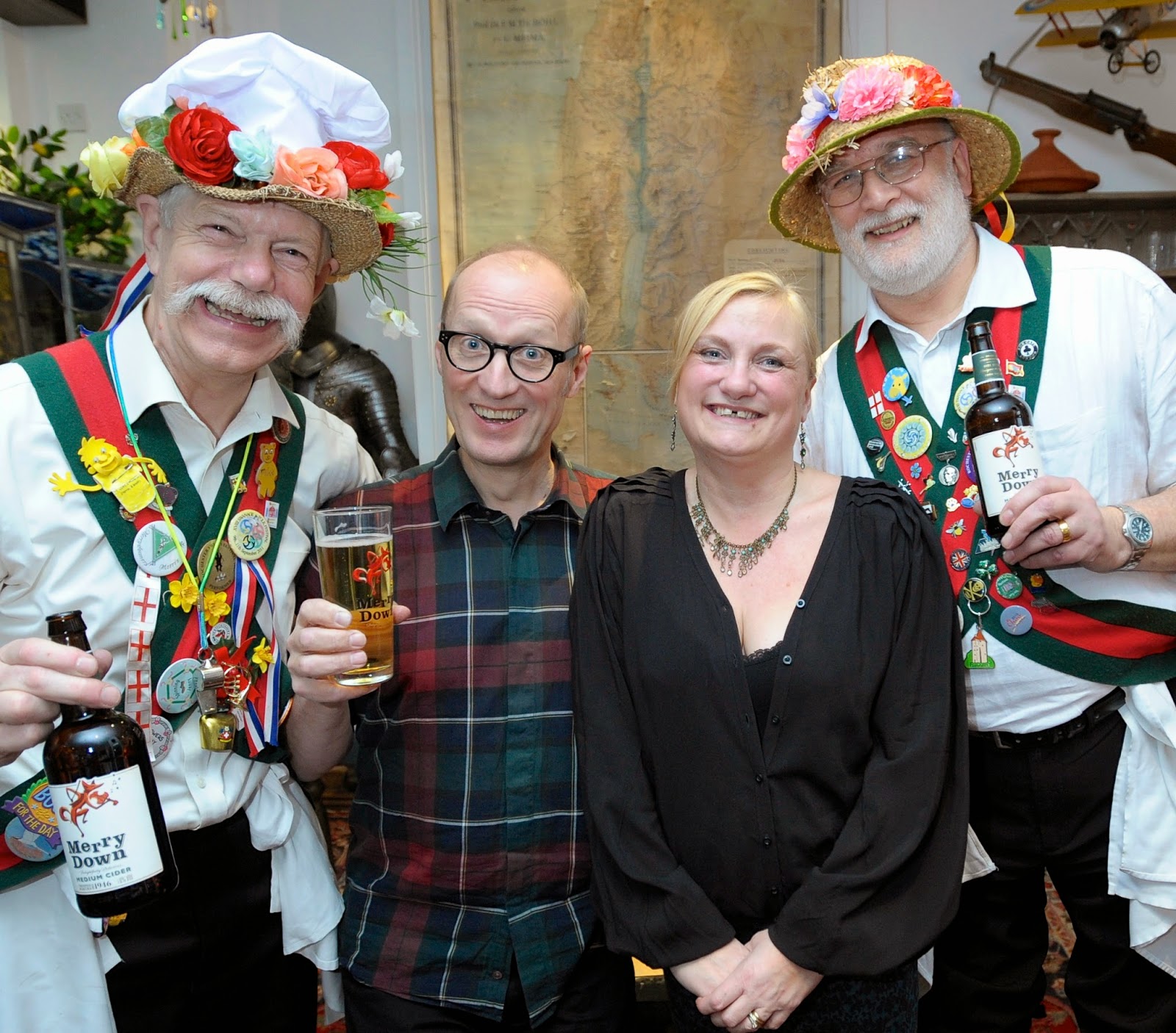 You see as well as being a very funny man Mr Edmondson is also a keen foodie and as well as presenting the series "Ade In Britain" which incorporated a fair bit of him learning about, cooking and eating a variety of regional specialities, he also was a worthy winner of the 8th series of "Celebrity Masterchef."

Personally I wouldn't have cared if he was preparing beans on toast for me but the actual menu of Coq Aux Cider (chicken cooked in Merry Down Cider) with new potatoes, green beans and mange tout sounded delicious. I must have been even more irritating than normal that day as I told everyone I met that I was going for dinner "with" Ade Edmonson. 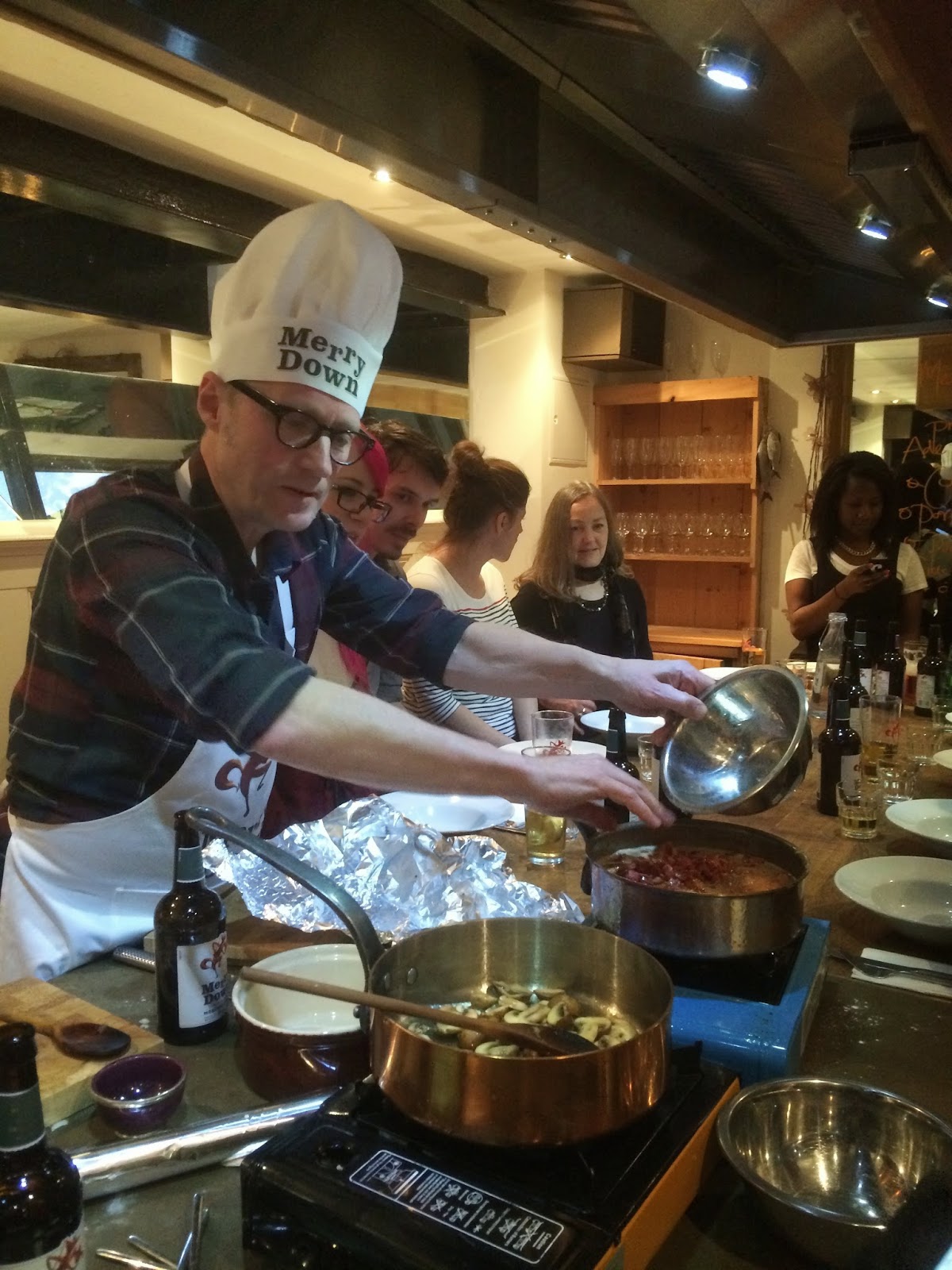 Arriving at the amazing venue - Food at 52 (advertised as a cookery school but in fact more of a must-visit culinary destination for true foodies) we were ushered through an innocuous door to what felt like a mad living room or pub lounge complete with a mounted boars head, piano, suit of armour  and some very smiley Morris Men who are called Merrydown Morris like the cider not because of it or after it!

And in the middle of it all there was Ade Edmondson himself! Close enough to lick! Don't worry - I didn't- I learned my lesson with Lembit (more of that another day). 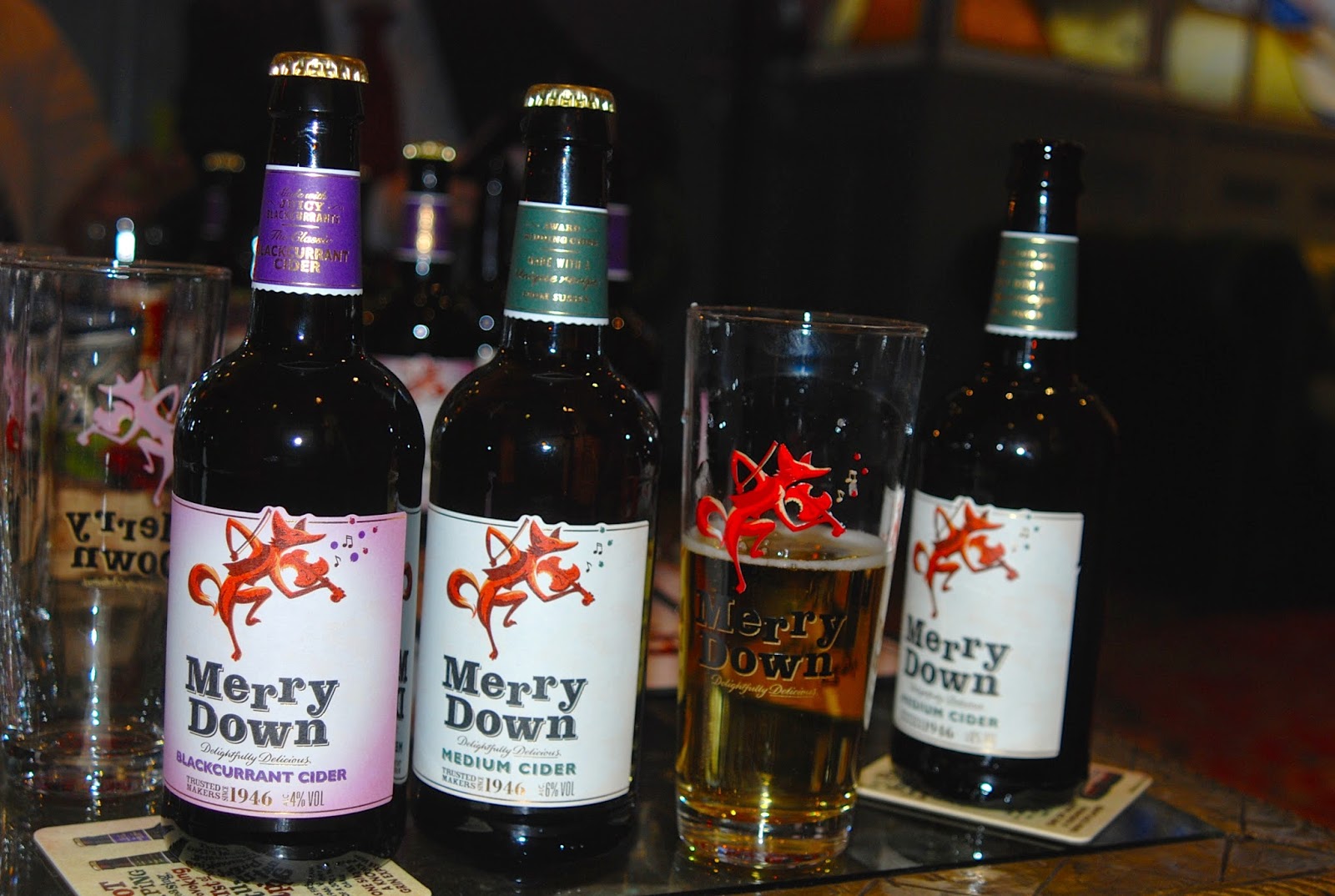 We were all there to celebrate the launch of the "eye popping, fantabulous new look" for Merry Down Cider which has been produced since the 1940's and is unique in that it is made from a blend of eating and cooking apples making it perfect for cooking with - although most of the guests seemed happy to bypass the cooking and just drank it in its pure apple or blackcurrant and apple forms! And at 6 per cent the party quickly got merry on Merry Down  meaning the dinner felt like a party with friends as we all got chatting to each other and the very lovely Ade.

What was he like? Smiley, cheeky, irreverent. I was delighted that I wasn't disappointed - that my hero was just as funny and entertaining as I hoped he would be! And, it turns out, really can cook!

The kitchen/dining area soon filled with the gorgeous smell of frying bacon and chicken and we learned lots of cookery tips including how to pop mustard seeds like popcorn to give a wonderful flavour to the recipe.

In the background chefs busied themselves replicating Ade's recipe so there would be enough to go round  - he just cooked 6 pieces in front of us. The meal was gorgeous but my day was made when Ade invited us to try his chicken. I'm struggling here not to make inappropriate jokes about the delight of putting Ade's Coq in my mouth....Oh cr*p I did it anyway.

In fact when I cook the recipe for friends it is going to be called Ade Edmondson's Coq. It was a simple but tasty dish and I'm sure will be a big hit. So which was better - the chicken prepared by the professionals or Ade's version?

Well I think Ade's had the edge but that maybe because while he was asked repeatedly to pose pouring cider into the pan he may have ended up doubling the quantity of alcohol in it!  Or maybe that I was so star struck and maybe now a teeny weeny bit in love with him that he could have made me a jam sandwich and I would swear it was the best thing I'd ever eaten.

Don't worry, my crush was not so serious that I forgot my lovely DH (who sadly can't cook at all!) and following the lead of a fellow blogger I asked if I could take home some of Ade's chicken for my husband. Arriving home both DH and my 18 year old were eagerly waiting to see if I had brought anything home for them - they wolfed it down in seconds!

Anyway- I've raved about it enough.  It's a lovely simple supper which would be great as a family meal or for an informal dinner party. Here's the recipe so you can try it yourself. Best served with an episode of The Young Ones on the TV or with punk/folk band tracks being performed by Ade's band The Bad Shepherds playing in the background!

Serve with boiled potatoes to soak up that delicious sauce. 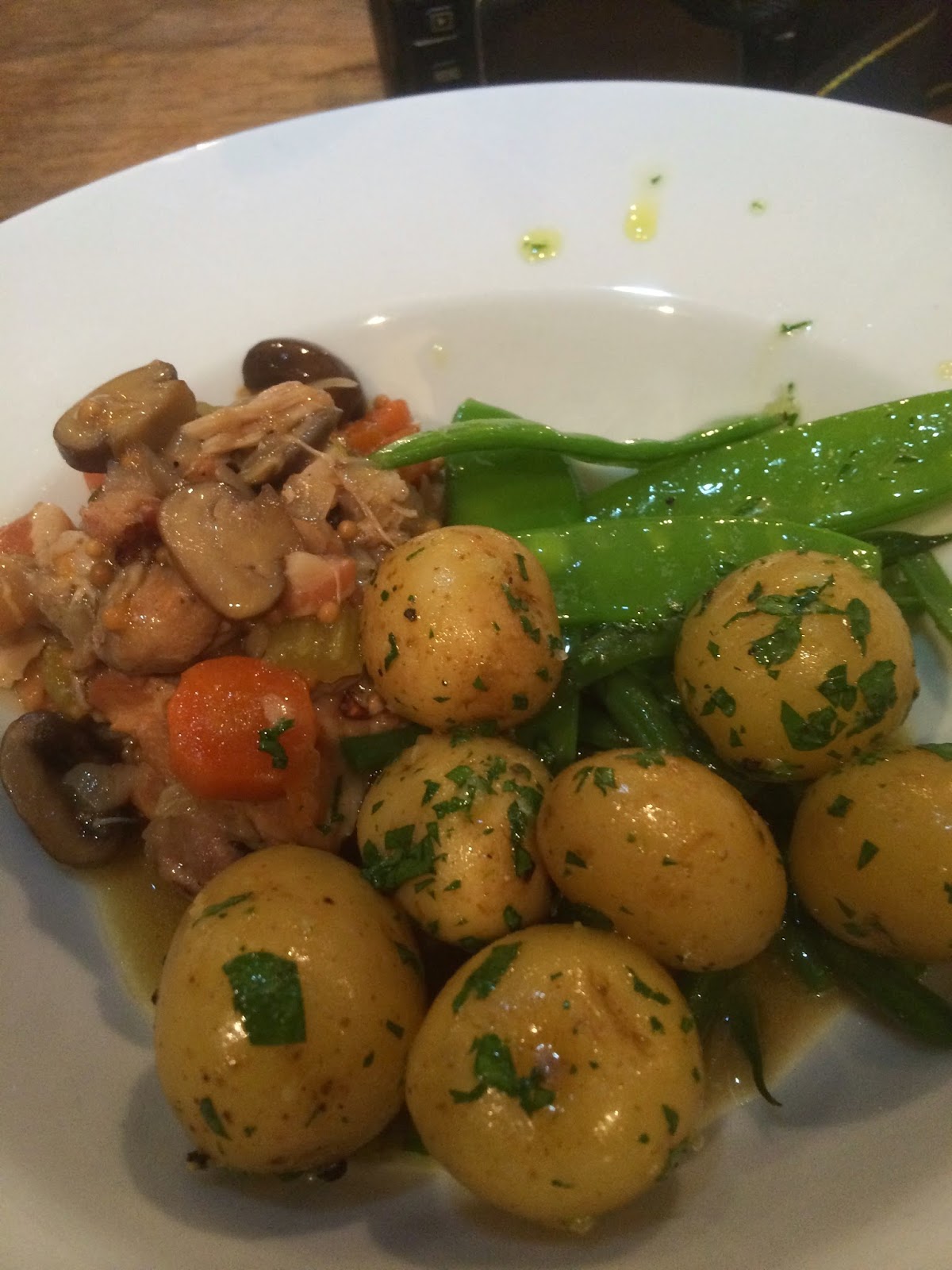 This post is linked to #magicmoments and #whatsthestory - click the badges below to find more great blogs!