on June 17, 2014
My ability to play computer games ended with Tetris. I loved that game. It didn't move too quickly,  I understood the rules, I even quite liked the Russian-esque music which bleeped incessantly as the blocks tumbled down the tiny little screen.

I also managed Pong (ignore me if you are under 40) and had lots of fun on my first PC when I downloaded a racing game and treated myself to a physical steering wheel and pedal set.

Moving on a decade or two and the children seem quite at home watching three different parts of a screen whilst simultaneously jumping, running, shooting and cloaking in addition to chatting on headsets to their school friends who are playing with them in their virtual world.

They have tried to teach me. I spent some time in hospital a few years ago and my son loaned me his DS and Animal Farm game which he had shown me how to use. But angry badgers and chatty squirrels kept approaching me and talking to me at speed in a foreign language and when I failed to comply with their requests got the hump and stomped off. I felt bewildered and guilty and abandoned the game in favour of staring at the patterns on the curtain round my bed.

But hurrah! someone has bought out a game that although complex and fast-moving appeals to my need for speed and is simple enough on one level for me to be able to join in the fun with the children.

This marvellous game is Anki DRIVE- an inspired blend of a physical remote controlled car game and an online platform game where you can evolve through levels creating an individually unique super car to beat all comers.

Think Mario Karts blended with Scalextric with the smooth and beautiful design of any Apple
product and you are coming close....

The cars were designed by Harald Belker- the man behind the Batmobile from the 1996 Batman film as well as cars from Minority Report and Tron Legacy.

At first glance, Anki DRIVE appears to be a game that lets you simply race against friends or robot cars. However, after only a few minutes of play you’ll realise that Anki DRIVE is an experience much deeper than that. It’s where heavy artillery, cunning strategy and cutting edge technology collide.

You need at least one Apple device - in our house we own a combination of iPods,  an iPad mini (our old iPad 2 is too old to run the app) and a couple of iPhones -and the Anki DRIVE app.

You get two matchbox-sized cars and an eight-foot track mapped on a practical roll-out vinyl mat  in the start-up kit.  You can choose race mode or battle mode, as you clash with friends or fiendishly clever artificial intelligence (AI) cars that fight for themselves  – and are not easy to beat.


You can fire a weapon to knock the car off in front of you, or use a defensive support item like a shield to stay safe. Like a video game, the more you play, the more powerful your car becomes, and the more you can customise it by collecting weapons and special abilities. You can add new weapons by earning points in the game. 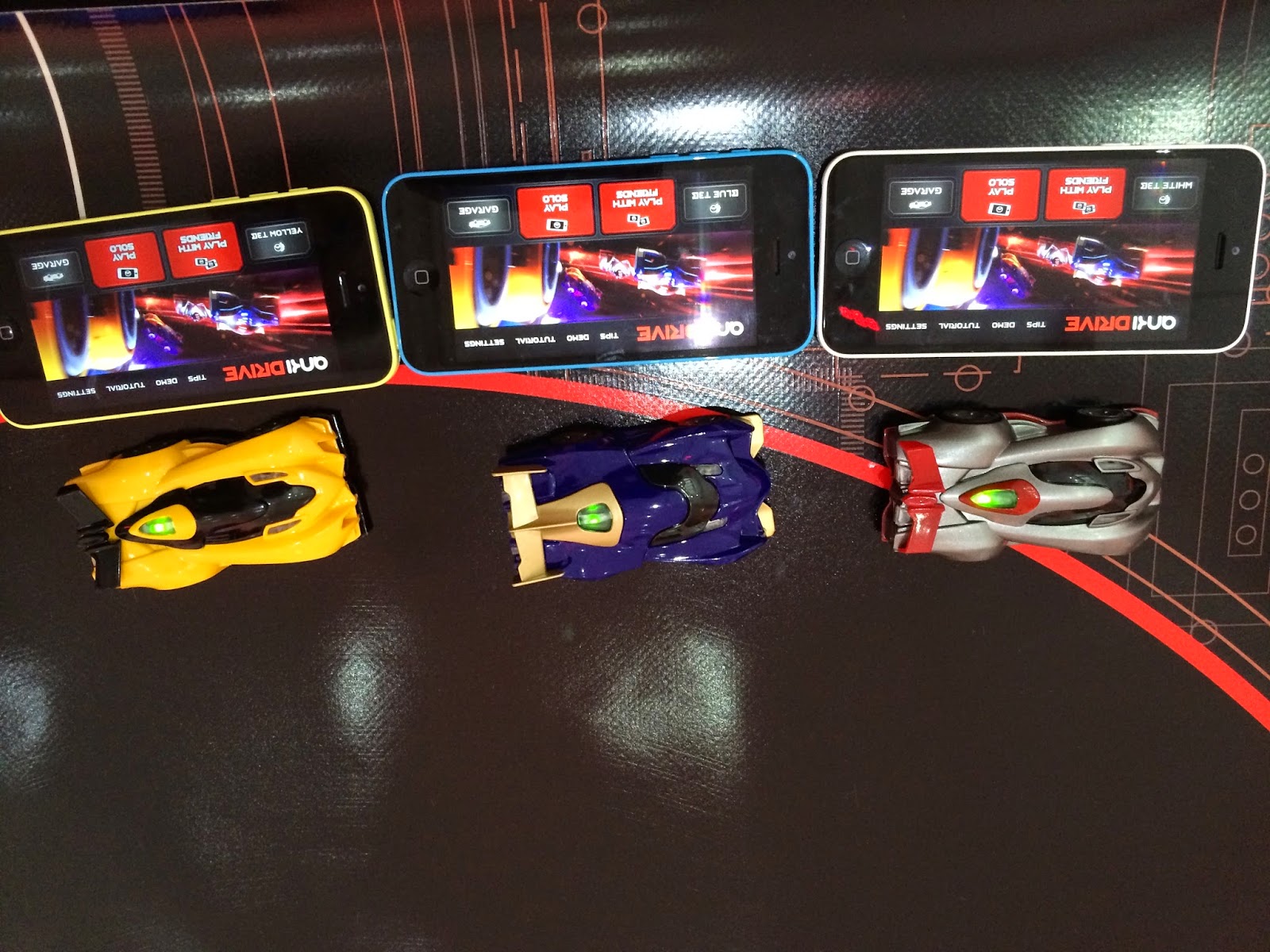 I tried it out after a quick lesson from the Anki people - and despite being sure I would be rubbish discovered that it is so simple to control the cars even me and my five year old can manage it. However don't be fooled into thinking this would make to too dull for experienced gamers - my 18 year-old was outraged on being told the special edition AI car, Corax,  would not let him control it until he had beaten it in battle and started an all out war with it!

We watched agog as he raced and battled over and over with the constantly adapting AI car which was spookily clever at predicting his strategy and it felt like a real victory of humans over robots when he finally beat it!

Having said that, the car will only be controlled from the iOS device he used so my younger children are still trying to beat it....

Plus points  for the game:

Equally fun for young children and adults- truly a game for all the family to enjoy. Can be played solo against the AI cars, or add more cars (buy in the Apple store at £49 each) to have a mega-race with all your friends or family. 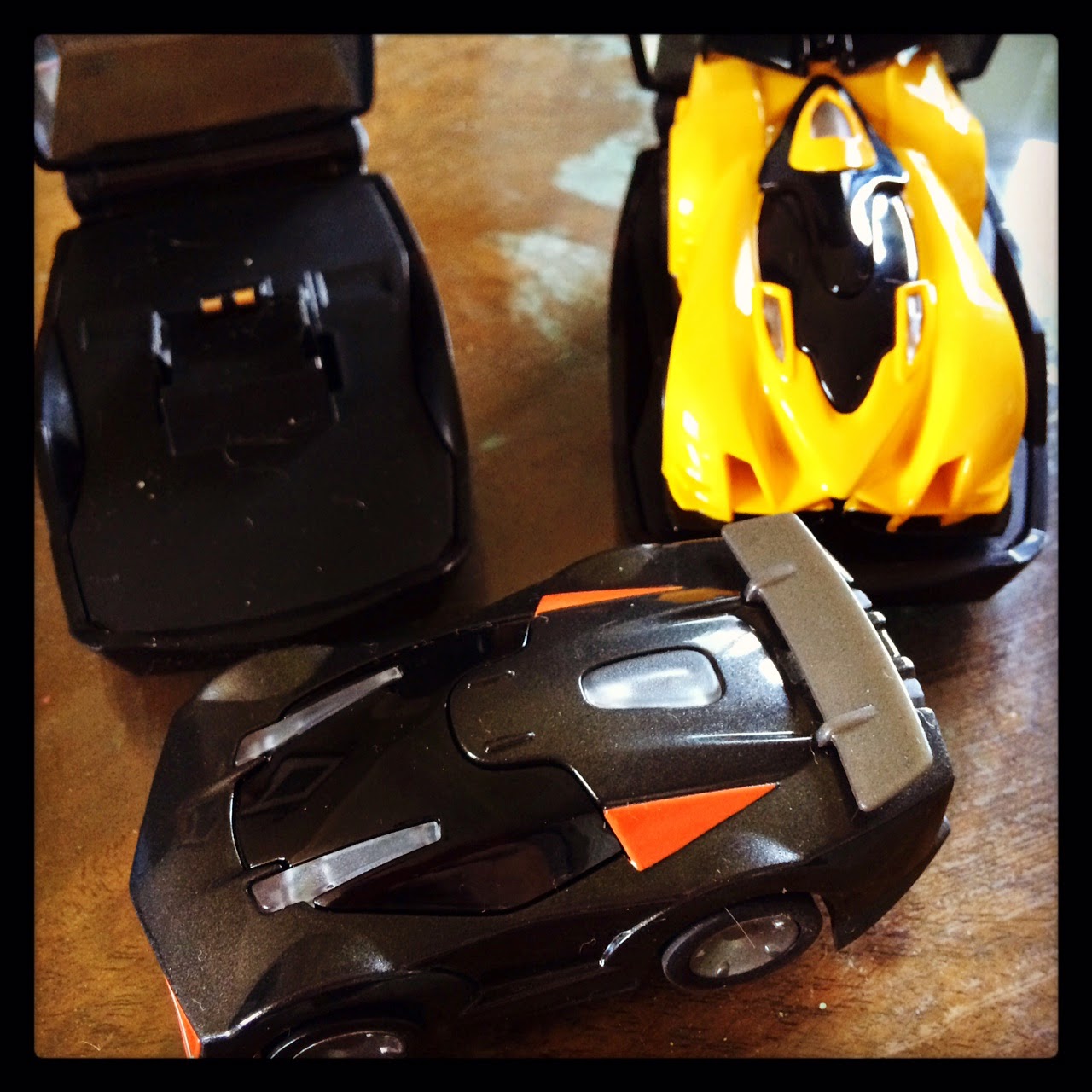 Portable - the roll-up mat is fantastic compared to the Scalextric which you had to clip together and then felt you had to leave out for three months to make the effort worthwhile. Cars don't keep flying off it either! If your friend has a kit too you can just take your car and iOS device and play on their mat.

Practical- wipe clean mat and well built sturdy cars which take a lot of tough love from enthusiastic players - I saw the cars being dropped, flying off the table after rough race and being bashed by other cars during battles and they showed no ill effects. Don't require wifi to work so you could even take it on a camping holiday. They say you can play it on grass - on our bumpy and sloping garden with longish grass the cars struggled a little bit but did work.

It's a big mat and we couldn't fit it on our dining table and it does take up most of our living room floor space. Having said that, it takes seconds to roll up and store the track in the handy carry tube it comes packed in.

It's not a pocket-money toy. The starter kit with mat and two cars retails at £179 with extra cars costing £49 each. But compare that to the price of a console and that most console games often cost around £40 and bear in mind it's a game that evolves as fast as the developers can upgrade the software so it should last a fair time without the family getting bored with it.

Certainly for my family it is the perfect game as it really does appeal to all ages - the age range of my children goes from 5-20 and being able to adjust the level of difficulty with just a tap on the app so the 5 year old can compete against his 20 year old brother makes it well worth the investment.

All of their friends who have played it have gone home and pestered their parents to buy one too so it's obviously going to be popular! Buy it now- I predict this will be one of Christmas 2014's best-sellers.

Disclaimer: I was given an Anki DRIVE starter kit and two extra cars free for the purposes of this honest, unbiased review.