A light look at in-car arguments and news about the fabulous family film, Rio 2

on July 28, 2014
When I was a child my family spent most of the six week holidays on mammoth road trips  to somewhere hot for our annual camping holiday. Italy, Spain, France, the country formerly known as Yugoslavia - all amazing places to explore as a child in the sunshine.

Indeed I  have some very happy memories  - snorkelling in crystal clear water in the south of France, marvelling at the Leaning Tower of Pisa, riding in a gondola in Venice, eating fish cooked on coals burning in pits in what had been the campsite road, visiting a Spanish chocolate factory and camping high in the mountains of Andorra.

But I have some equally terrible memories - mostly involving being in a (non-airconditioned) car for many hours a day and everyone getting tired and bad tempered. The rows were worst when we had to drive through strange cities as my father refused to ever consult a map or ask for directions. Hungry and tired and after scorching days we would be driving in circles hunting for Camping Municipal. Did I mention the car wasn't air conditioned?

I was amused to receive a fun survey this week which claims that this time of year- the school summer holidays - is the worst for family rows in the car. Well I suppose with everyone trying to get somewhere for their holidays that is obvious.

After spending three hours on the M25 driving a distance that normally takes me an hour and a half I was getting a bit grumpy myself. And to further remind me of my sweltering childhood travels the air con in our car seems to have run out so it was hotter than a hot thing in there.

Anyway, enough of my woes - if you are stuck in a car right now reading this on your mobile device, hopefully this will turn your frown upside down. Here's a few fun statistics.

Most frequent causes of dispute including the music being played, children asking lots of questions and who gets to sit in the front seat. However an interesting 1 in 20 arguments are started by someone farting in the car.

For those parents that don’t pull over and refuse to go any further (21%) or turn around and drive straight home (15%), the humble services become a refuge to defuse tensions.

The survey was commissioned to mark the release of family film Rio 2 by Twentieth Century Fox Home Entertainment.

The film takes you deep into the Brazilian Amazon Rainforest for the most fun you’ll have all summer with exciting special features everyone will enjoy.

The cast of the animated hit comedy Rio returns — along with a new flock of all-star voice talent, including Bruno Mars, Kristin Chenoweth, Andy Garcia and more — in this high-flying sequel for the whole family.

The film follows on from the first film when Blu met Jewel. In this sequel Blu (Oscar® nominee Jesse Eisenberg1), Jewel (Oscar® winner Anne Hathaway2) and their three kids take a walk on the wild side and embark on a colorful, comical, music-filled journey through the Amazon. 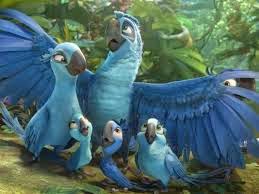 As Blu, formerly a house-pet, tries to fit into his new surroundings, he goes beak-to-beak with the villainous Nigel, and meets the most fearsome adversary of all: his father-in-law!

A Rio 2 spokesperson commented: “With one third of families already using tablets on family journeys, Rio 2 provides the perfect solution to a peaceful journey. The great music and incredible cast means there is something for every family member to enjoy”.

Rio 2 was released on Digital HD nationwide on 28th July, and will be out on Blu-ray and DVD on 4th August. (This is not a sponsored post)
DVD release family films family rows M25 Pisa Rio 2 Venice