on August 05, 2014
My whole family loved Rio - the film about Blu, the rare blue Spix's Macaw, who lived in a house with his owner Linda but who ended up on a big adventure, making friends and meeting his soulmate Jewel along the way.

We were delighted to hear that a sequel had been made but a trip to the cinema is prohibitively expensive when you have seven children so we have been eagerly  (eagle-y? bad bird pun!) waiting for the DVD/Bluray release. 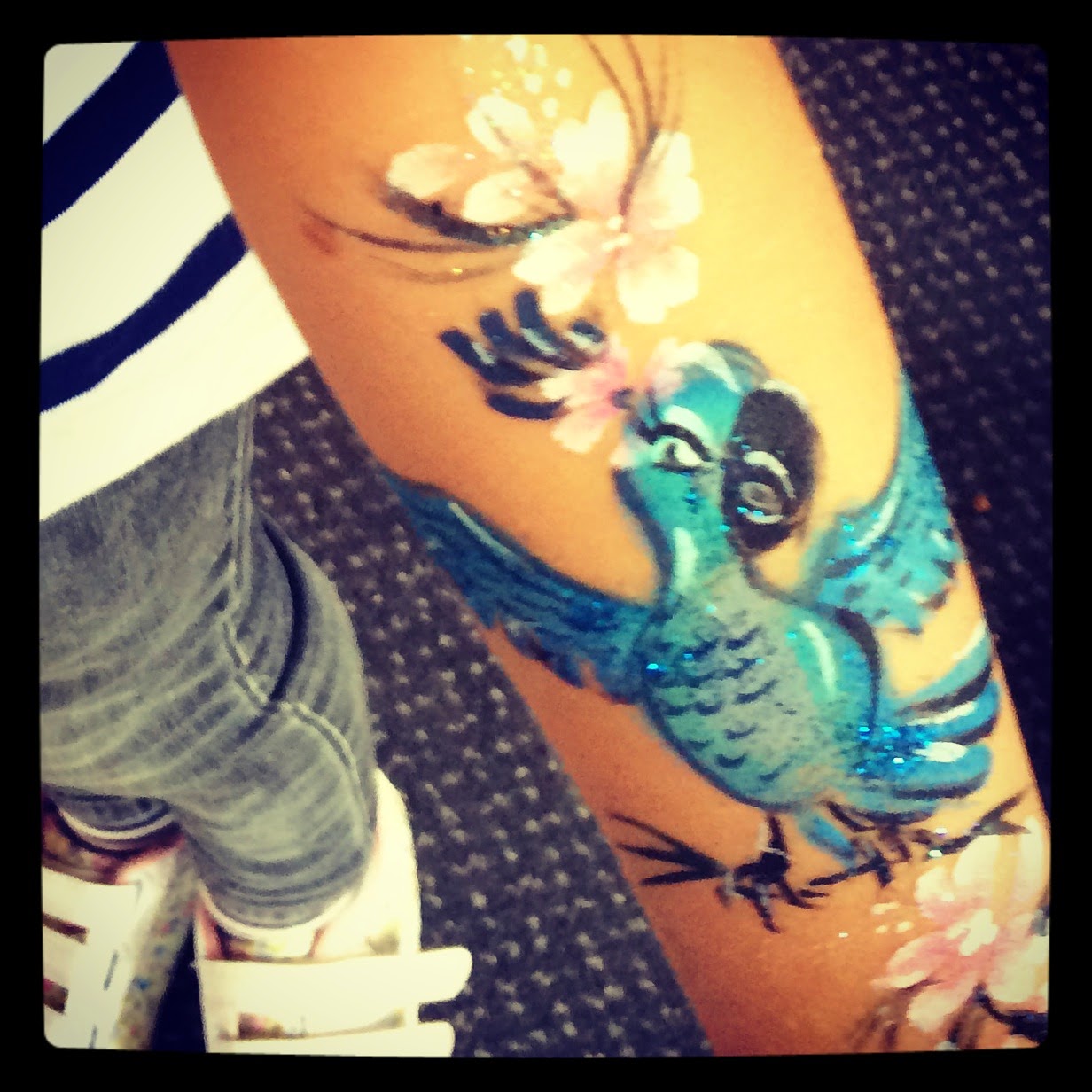 And this week our wait came to an end with a spectacular launch event at ZSL London where we got to meet some of the stars of the show including the amazing body percussion band The Barbatuques, get themed face paint (or arm art in our case as none of my children are keen on having their faces painted) and of course watch the movie.

After loading up with sweet treats and mocktails and after some body percussion practice led by The Barratuques we settled down to watch - me and DS#3 in proper seats while the other children lounged on comfy beanbags. I inhaled one last doughnut as the film started only to spot that athlete Daley Thompson was behind me. I've never felt so guilty about eating a doughnut. Maybe I could get a world class sportsman to trail behind me all the time - I reckon I'd be stick thin in no time!

Anyway, as always, I digress. So the film. After a last minute demand for the toilet from Grumpy just as the film started I was worried I would have missed something crucial but despite his lingering over the taps which were suddenly the most fascinating thing in the world I soon caught up. 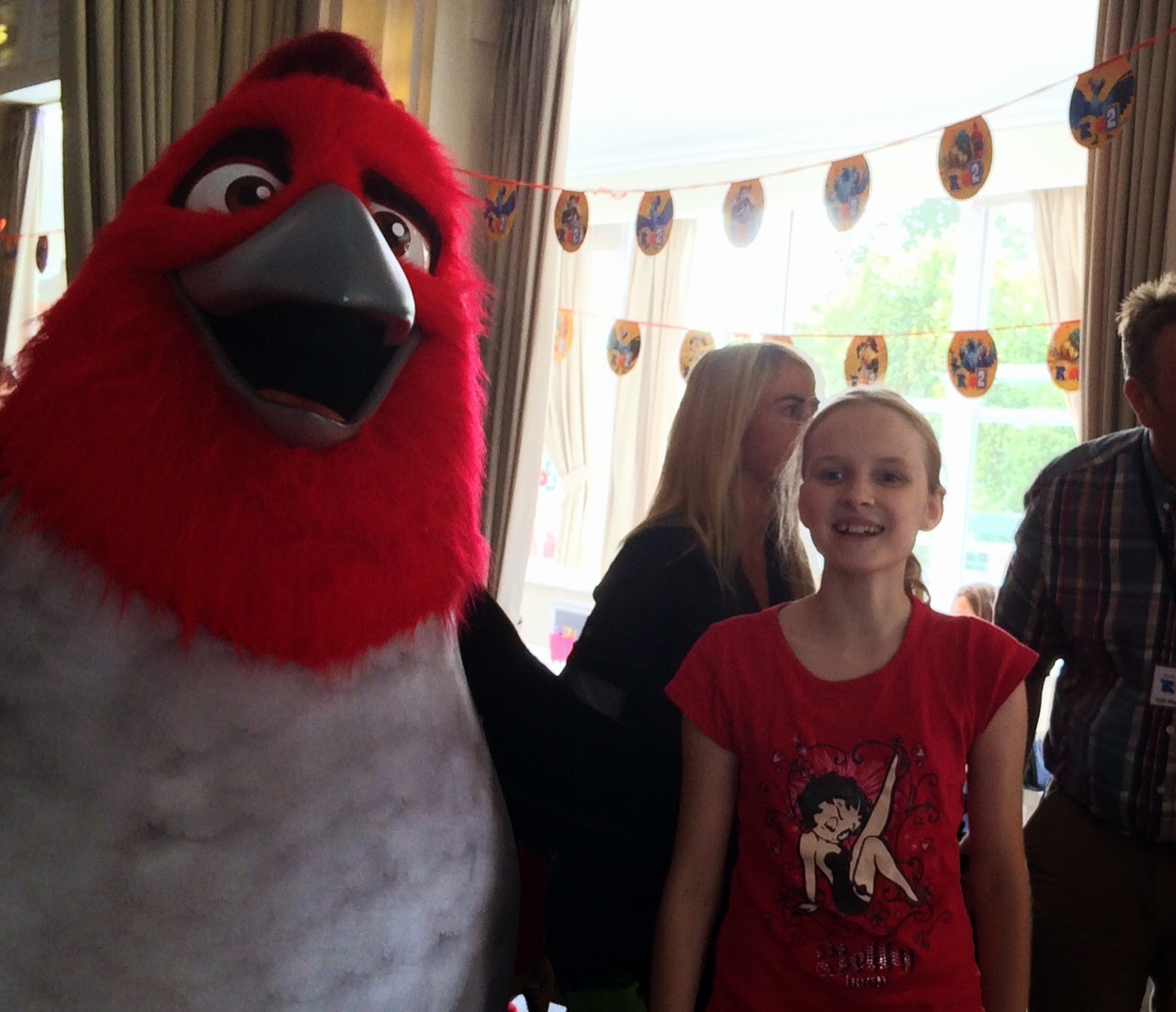 Linda and her husband had discovered evidence of a whole flock of the supposedly rare blue macaws in the Amazon - and Blue and his family decide to fly there from their bird sanctuary home in Rio (of course!) to join them.

I don't want to give it away for anyone who hasn't seen it yet but there was a good selection of baddies including the marvellous Nigel returning from the first film to get his revenge, and some tree-felling villains to boo.

I have to say the film slowed up for quite a while in the middle and I noticed the sugared-up younger children at the screening lost interest for a while. This made it even more difficult to follow as distracting screeching, curtain pulling and running about ensued.

Even Grumpy who normally loves a good movie got a bit fed up and whiny but a fabulous birdy football match on screen grabbed his attention again and he stayed with it until the end. The older children (aged from 8-15) were pretty much absorbed throughout.

And he couldn't wait to watch it again on DVD as soon as we got home and without a ton of sugary doughnut running through his system this time he was enthralled with it from start to finish.

Highlights? The amazing soundtrack, the divinely evil and theatrical Nigel singing 'I will survive", The Barbatuques (watch them in action on my short YouTube video below) and the realisation that I was in the company of a childhood hero of mine, Goodie and nature expert Bill Oddie.


The children declared it one of their best days out ever and DS#3 awarded the film 4/5 - it lost a star he said because of the longish bit about felling the rainforest in the middle of the film which he also spotted did not keep the younger viewers engaged. I think maybe in a less stimulating environment it would be fine, especially if you explain to the children why this issue is so important.

Rio 2 is available on DVD, and BluRay RIGHT NOW from all the usual stockists.