on November 20, 2014
I have been a huge Scooby Doo fan since I was young - which was a long time ago. I have passed this love of the Scooby-snack guzzling dog and the "meddling kids" on to my own children who greet news of each new adventure with levels of excitement normally only seen at Christmas. 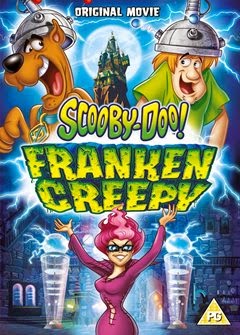 The latest offering from Warner Bros is an original film,"Frankencreepy", a 71 minute spooky caper rated PG because of some mild scary scenes. Well I'd expect nothing less from the occupants of the Mystery Machine.

So, the story goes that Velma discovers she's inherited a cursed castle in the terrifying town of Transylvania. No, not the one you are thinking of but a namesake in Pennsylvania!

Scooby, Shaggy, Fred and Daphne persuade her to go and claim her inheritance but the inevitable ghost at the castle is so cross it blows up the Mystery Machine as a warning!

The DVD we watched included two bonus episodes - A Gaggle of Galloping Ghosts and To Switch A Witch so plenty to keep the children occupied on a rainy day.

A selection of my children aged between 6-15 settled down on just such a day to watch the movie. That's the great thing about Scooby Doo - the character appeals to a wide age range.

My six year old was a little nervous at times but was happy to keep watching with his big bro by his side. At the end all of them said they thought it was the best Scooby Doo movie yet. High praise indeed!

My 15-year-old son explained:"It's definitely better than the others - although they are good - this one os not so predictable and there are lots of surprises."

Nine-year-old DS#4 added:"It was really good - I liked the bit with the hypnotist. I think it's the best film so far."

Perfect for popping in Christmas stockings or buying to have ready for when the children have had enough of Christmas TV.  It gets my thumbs up - the DVD certainly has given me a few hours of peace already!

Disclaimer: I received a free copy of the new original Scooby Doo movie Frankencreeepy for the purposes of this honest review. Views and opinions remain my own. (and those of my children!)