A different look at the Nativity Story - with owls!

on December 24, 2014
I was asked to write a story based on the Nativity for my church's Christmas Eve crib service this year. I was especially asked to include owls if possible for my daughter and her best friend who both love them! They spent a happy hour making masks with my friend ready for their performance.

Throughout the story children in costume (including two little owls!) made their way to our "stable" carrying figures of the characters mentioned.

At the end we all sang Silent Night - such a beautiful way to celebrate Christmas Eve. I thought it was a shame not to share my little story in case anyone else has owl-mad children -or a publishing contract they'd like me to sign!

Anyway, here it is:

(All the best stories start like that don't they?)

Once upon a time there was a mummy owl and a baby owl. They lived in a tree right in a square in the middle of a busy town called Bethlehem. They slept throughout the day and as the sun started to set they woke up. As owls do.

Mummy owl stretched her wings and looked at her baby and said :"I love you baby owl"

Baby owl yawned and stretched her wings and said:"Mummy you say that every time we wake up and every night before we go to sleep. But what does this word "love" mean?

Mummy owl blinked and thought for a little while. Then she pointed with her wing at the square where a man and a lady on a donkey were knocking on doors. The lady had a big round tummy. She was having a baby - very soon it seemed!

The couple knocked and knocked at lots of doors. They were searching for somewhere to stay but no-one would let them in. The town was even busier than usual because of some new rules which meant people had to travel to the town they were born in to sign a register. All the hotels (which they used to call Inns) were full.

Then one man answered his door and pointed to the back of his Inn. The couple smiled and took their donkey to the stable he was pointing at. It wasn't as nice as a hotel but it was warm and dry and they were grateful to the kind Innkeeper.

Mummy owl said to baby owl:"Did you see that? That Innkeeper's heart is filled with love. The sort of love which people show for each other even when they don't know each other."

Soon after the owls saw that the lady had given birth to a tiny baby! She bent and kissed his tiny nose. The man stroked the baby's fuzzy little head. They looked so happy!

Mummy owl said to baby owl:"Did you see that? That is love. A very special love that parents have for their child. They love each other and they love their baby."

Then Mummy Owl heard another noise. It was the sweetest sound coming from high in the sky and seemed to be moving towards the hill which overlooked the town. She nudged baby owl and said:"Fly with me and I will show you something special."

The two owls flew through the darkening sky and landed on a branch on a hillside tree. Below them some shepherds watched over their flocks of sheep.

Suddenly the dark sky filled with bright light and angels. One angel spoke to the shepherds saying: "Great News! A baby has been born in a stable in Bethlehem who will save all the world."

The shepherds were amazed! They wanted to see this special baby for themselves. They took their flock and went down into Bethlehem and straight to the stable where the baby was with his parents Mary and Joseph.

Mary and Joseph had named their baby, Jesus. He did not look like the Saviour of the world, he just looked like a normal baby sleeping peacefully but the shepherds knew he was special.

Mummy Owl explained to Baby Owl."These shepherds know all about love. They stay out in all weather all night to protect their sheep. The baby they have come to see will be a shepherd one day too - but his flock will be very different to theirs. His flock will cover the whole earth and his love will last for thousands of years.

A star appeared over the stable. Far away three wise men saw the new star in the sky and knew it was a sign that someone very important  had been born. They gathered gifts of Gold, Frankincense and Myrrh (three things which were very expensive way back then, even more expensive than a Playstation 4!) and travelled to see the new King.

They made a few mistakes on the way but eventually they found the baby Jesus and realised he was the important person they needed to give their gifts too.

Mummy owl nodded towards the 3 men. She said to baby owl:"Those wise men know all about love. they know that even the smallest, poorest people are important and deserve love. They know you don't need to be a pop star, prime minister or a millionaire to be a VIP."

Mummy Owl and Baby owl flew back to their tree overlooking the stable where the baby Jesus had just woken up for some milk.

She said:"Look down baby owl. Look at all the people who have come to see this very special baby.  Look at the awe and wonder and joy on their faces. That is love. This baby will grow up and teach millions of people about love. He will speak to them, heal them, teach them and die for them. For thousands of years people will celebrate this baby's birthday with gratitude for all he did for them. That is love baby owl." 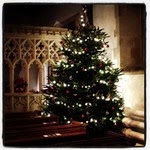 The sun was creeping up on the horizon and baby owl started to yawn. It was time to go to sleep. Baby owl blinked up at her mummy. She finally understood how important love was, how important it was to share it.

"I love you mummy" she said.