Teachers! Schools! Get crafty, recycle and win with The Boxtrolls

on December 18, 2014
I love it when my children's school ask for certain items if what I would call rubbish to use in a craft project. Last week it was plastic milk bottles and as you can imagine I get through a fair few of those in my house so was happy to oblige sending Grumpy with one a day until they begged me to stop.
However *looks around guiltily* I am less pleased when any of my children emerge glowing with pride and the effort of carrying some giant glued together pile of cr*p  art which I then have to display until such time as I can get away with "recycling" it.
Junk modelling is a vital part of childhood though so I was pleased to hear about a new initiative from Universal Pictures (UK) and environmental charity Keep Britain Tidy who together have created The Big Boxtrolls Recycling Week Challenge with the adorable rubbish collecting movie superstars, The Boxtrolls. 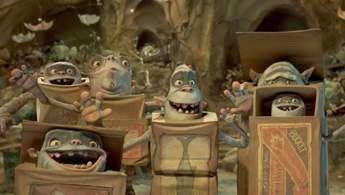 The idea is that from Monday 26th –  Friday 30th January 2015, teachers and pupils collect objects which would be suitable for recycling.. Maybe each child could bring in a cardboard box of rubbish collected over the Christmas period?  I'm thinking not the turkey carcass or the drooping Christmas tree but I'm sure there will be lots of other suitable items  like cards, ripped wrapping paper and discarded boxes to bring into school.
The children then are supposed to get crafty with the "rubbish" to create their very own Boxtroll, whilst learning how to correctly recycle and care for their own communities.
The Big Boxtrolls Recycling Week Challenge is being supported by Kitten and mum of 4 Natasha Hamilton.

Natasha said: “I’m thrilled to be a part of The Big Boxtrolls Recycling Week Challenge. After Christmas, there’s always so many leftover boxes, discarded wrapping paper and Christmas cards lying around. We’re asking schools, families and friends to come together to reuse and recycle this material in the New Year by getting crafty together with the super cute and rubbish collecting boxtroll characters!”
Schools can enter by simply registering at the Keep Britain Tidy website  Once signed up, participating schools will receive fun and easy to use downloadable resource packs, which include  activity sheets and certificates to give to those taking part.
The school that follows in the footsteps of the thrifty ways of the Boxtroll characters and create the most impressive Boxtroll will win an amazing class trip to Universal Pictures (UK) in London for a special screening of The Boxtrolls, plus a meet and greet with the movie star Boxtrolls themselves. How cool is that? 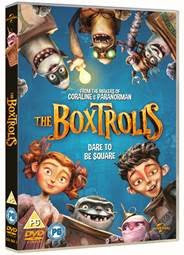 To enter into the draw for this, registered schools should email an image of their crafty creation along with their school name to boxtrolls@keepbritaintidy.org
And that’s not all, every school that takes part will also be in the running to receive one of five visits from the exciting and giant Boxtrolls bin. No idea what this is? If you haven't seen the movie yet The Boxtrolls is released on 3D Blu-ray and DVD on 26 January 2015.
With an outstanding voice cast,The Boxtrolls is a handcrafted animation by LAIKA, which follows the story of the adorable trash collecting characters, who have adopted orphaned boy Eggs and raised him in the amazing world that they have created by collecting junk no longer needed by the people above their underground haven, in the streets of Cheesebridge.
I know - we had Wombles for that when I was young but let's face it there is enough junk to be recycled for the Boxtrolls to live happily along side the Wimbledon creatures.
Disclaimer; This is NOT a sponsored post.
Atomic Kitten Boxtrolls competition Keep Britain Tidy Natasha Hamilton recycle recycling schools Universal Pictures (UK) Wombles