on June 10, 2015
My children are avid gamers but since we are a  larger than average family gaming is most definitely a group activity with lots of chatter and exchange of tips. Oh, and the occasional temper tantrum over destroyed virtual property of course! We've even had to instigate a "no talking about games at the dinner table" rule.

I was interested  to hear that  Mind Candy™ (the global entertainment company, responsible for Moshi Monsters and Poppet) had teamed up with Topps, the UK’s leading collectibles company, to launch a brand new trading card game for their  World of Warriors™ mobile gaming app (available on IOS and Android.) 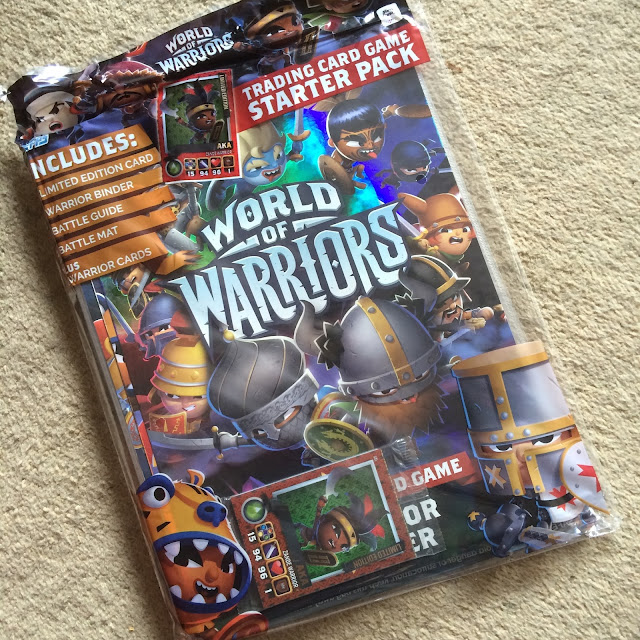 Anything that gets my youngsters away from a screen for a while is great and trading card games are always a hit in our house as there's always someone to play with. Combine cards with online game characters and you are on to a winner.

I do get a bit sick of picking up cards and establishing ownership of the card I found under the sofa can be a nightmare, especially if it's a good card when they all claim it's definitely their card.

On the plus side they are relatively cheap and  booster packs (containing 8 cards for £1) make great pocket money treats or rewards for good behaviour. They are very portable and apparently, endlessly fascinating! They are suitable for quite a wide age range - my 6 year old likes the pictures and covets "shiny" cards while my older children understand fully how the games work and like to collect cards tactically.

Not heard of it? Where have you been!?!

"World of Warriors™ is a combat strategy game which blends fighting and role-play gaming in an unforgettable epic adventure. Featuring an ever-expanding array of the greatest warriors in history, from Ninjas and Aztecs to Knights and Vikings, World of Warriors™ takes players on an epic journey across the vast Wildlands."

With the Topps  game children can build their own army of warriors by collecting trading cards, featuring everything from Aztecs to Romans, Knights to Samurai and more, and use them to battle their friends to become the ultimate warrior!

There are over 260 cards in the inaugural collection, including holographic foil cards and epic gold hero warrior cards.

Louise Ramplin, Entertainment Marketing Manager for Topps, explains: “At Topps we are really excited about World of Warriors™ . With three million downloads of the World of Warriors™ app globally, and with 3 in 4 gamers rating it five stars,  we anticipate this latest edition to our portfolio of trading card collections to be a huge success at retail and on the playground.”

World of Warriors™ Art Director Johnny Taylor, added: “We hope the cards will engage users of the game, encouraging them build their own army of warriors and start battling their friends in the playground to become the ultimate warrior!”

The game certainly proved a hit in our house with my 9 and 15 year old sons particularly attracted to the starter set we were sent. It quickly became apparent that we needed to buy more cards to play properly but my children were quite keen on filling the trading card display binder and planning how they would work together to collect all the cards.

You can order specific cards online they discovered so they are all now very keen to work together to pool their money and build up a good collection.

Starter Packs (£4.99)  contain everything needed to kick off the collection in style, including a collector binder, A2 game guide, A2 game mat, a packet of trading cards and one Limited Edition card. Packets of 8 cards retail for £1. 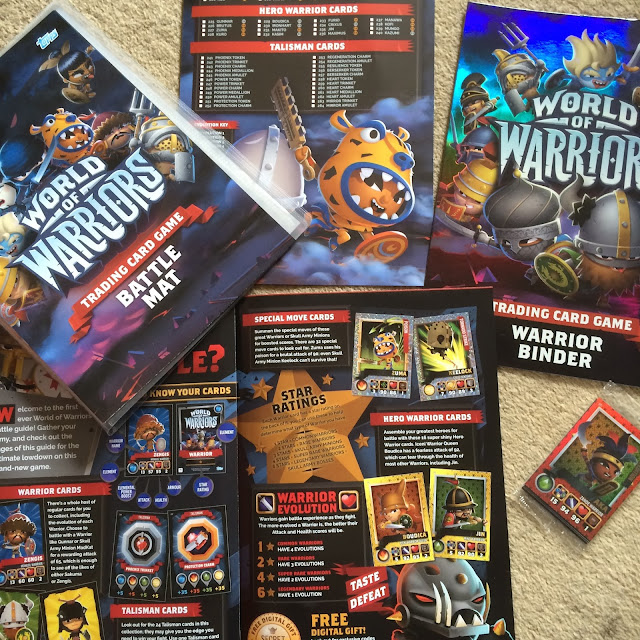 Disclaimer: I was sent a starter pack for the purposes of this honest review. Views and opinions remain my own.