New Movie : The Winx Club fairies in The Mystery of the Abyss - children's film review

on June 16, 2015
It's not very often my youngest daughter has control of the remote control and when she does she loves nothing better than to curl up in a big chair with a good movie.

Last week it was a rare day when all of her siblings were out or busy and she asked if she could watch TV - she was delighted when I told her I had a review copy of the very latest Winx Club movie she could enjoy without cheeky comments from her older brothers who are generally less keen on movies with fairies in!

Last year she dressed up as one of the Winx Club fairies, Bella, for a special school day which involved turning up in a costume representing a character with a super power. She was not the only Winx Club fairy in school that day!

Can you believe The Winx Club celebrates its 10th anniversary this year?  Loyal fans will be delighted to learn this anniversary is being marked with a brand new magical fantasy titled Winx Club: The Mystery of the Abyss which was released on DVD and Digital Download on 8th June 2015. 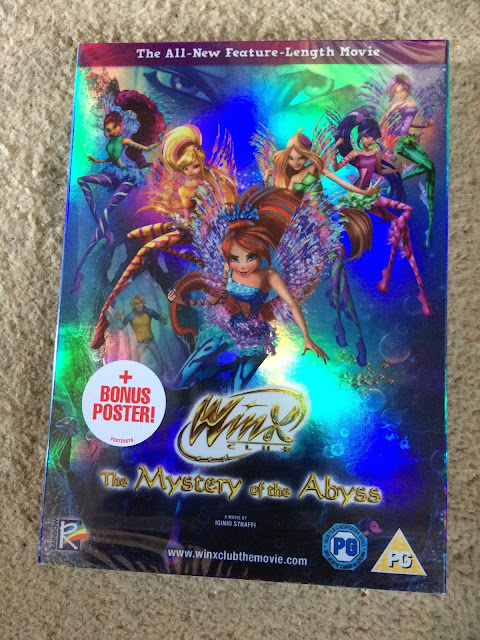 So without giving too much of the plot away, what is the film about?

Apparently Winx Club: The Mystery of the Abyss follows the Winx fairies as they battle the Trix and the evil nymph Politea, who are both on the brink of gaining more power than they have ever had before – all they have to do is find the Pearl of the Deep hidden in the depths of the Infinite Ocean.

The Trix and Politea underestimate the Winx, however - Bloom is determined to win the magic Pearl herself, and rescue Prince Sky who has been captured! Will The Winx manage to foil their enemies’ plans before it is too late?

The film is rated PG with warnings on the case about mild fantasy violence and threat but my 10-year-old daughter did not find it scary or threatening at all.

Her opinion was that the movie started slowly taking a while to build up to what she considered the interesting bits. She said when they actually started the battle scenes where the Winx fairies tried to get Prince Sky from Bloom (from the Trix) it was much more exciting!

Overall she said she really enjoyed the movie which runs for just under an hour and twenty minutes and added that she would recommend it for her friends both male and female.

My daughter said to write that she thinks the film might be a bit scary for very young children although my 6-year-old son said he didn't find it at all scary when he watched the film later in the week.

The film earned 8/10 from DD#2 only losing points for being slow to get going with the action and, she felt, a bit confusing at the end. She added; "It was really cool though."

Disclaimer: We received a free copy of The Winx Club:The Mystery of the Abyss for the purposes of this honest review. Views and opinions remain our own.
children's movie download DVD fairies film review films for children kids film movie review The Winx Club Winx Club Fairies