on July 12, 2015
One of the most baffling things about my children is their reluctance to clean their teeth.  Its a constant battle and they will go to any lengths to "prove" they have cleaned them.

I have even caught one of them rubbing toothpaste onto their teeth with a finger - inches from their actual toothbrush - so their breath smells minty. Surely it would have been just as quick and easy to ACTUALLY clean their teeth?

I frequently actually clean them myself for them - I know, it's a bit helicopter mum, but I worry they don't do a good enough job themselves. After a thorough brushing I ask them:"Doesn't that feel nicer?"

I hate having furry teeth and that nasty taste you can get if you, for example (not at all taken from my own life of course) fall into bed too drunk to clean teeth or take makeup off.

Mostly however  I leave the chore up to them apart from my 6 year old who stands on a step in the kitchen and makes roaring dinosaur noises so I can reach every surface of his tiny teeth.

The mornings with a school run are particularly tricky with time at a premium so it’s no surprise to me that a survey of 2,000 adults by Careway Pharmacies revealed that one in five parents don’t have the time to oversee their children cleaning their teeth for the recommended two minutes, twice a day.

Parents also admitted that when it comes to their own teeth, more than two thirds brush for less than two minutes and only 15% are aware of the long term health issues associated with poor dental health, such as Type 2 diabetes, heart disease and strokes. Scary stuff!

Our family was challenged to take a two-week tooth cleaning challenge using disclosing tablets ( which reveal harmful plaque) at the start and finish to see if our brushing technique had improved. The children were very excited by this and insisted we start on a school morning. 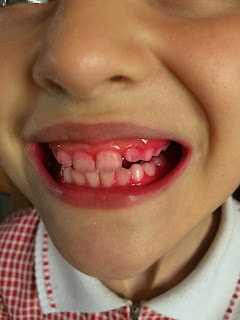 We had not realised the disclosing tablets would stain quite so spectacularly so they went off to school with right red gums and tongues after brushing the excess off their teeth! My husband
sported the look of a flesh-chomping zombie for a while too! 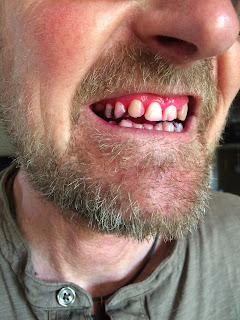