on July 01, 2015
I wrote a post couple of weeks ago about a new Topps trading card game based on the massively popular gaming app called "World of Warriors" and I have just found out that for fans there is even more good news - there is a magazine entirely devoted to the game!

The magazine which is of course titled " World of Warriors" contains everything anyone might want to know about the game, characters and top tips.

The issue we were sent to look at contained lots to thrill my 10-year-old boy from "wicked weapon stats" to "deadly viking stats" plus puzzles, 3 posters and battles.

His siblings aged from 6-19 all played with the free toy which came with the edition - an "epic warriors" bow and arrow set. The cats went into hiding. 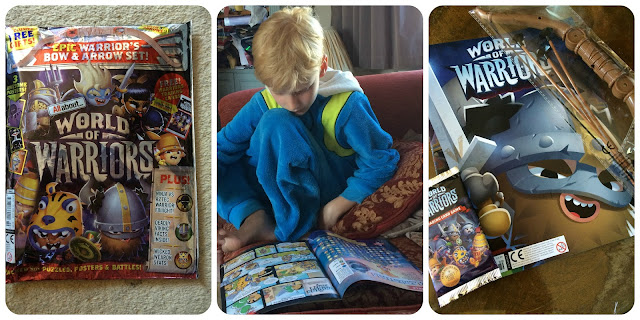 There was also a pack of World of Warriors collectable cards for the Topps trading game which my son eagerly ripped open. Luckily the cards are only pocket money price to buy so it won't take him long to get a good collection.

The magazine costs £3.99 to buy which initially sounds quite a lot but if the content continues to be as good and the pack contains as many extras as this one did I think it's a reasonable price to pay.

My son spent quite a long time browsing through and says he has lots to go back to including the puzzles. I would certainly prefer to spend money on this rather  than sweets or fizzy drinks anyway!

Disclaimer: we were sent one issue of the World of Warriors magazine for the purposes of this honest unbiased review.