on September 04, 2015
I had seen the TV adverts for the new 4D Shrek's Adventure on London's Southbank but to be honest I couldn't really work out what it entailed exactly. Was it a ride? An exhibition? A theatrical performance?

Turned out it's sort of all of these - an immersive theatre experience for all ages combined with a 4D simulator ride which even my cynical 19 year old enjoyed and a gallery of Dreamworks favourites for fans to pose next to.

We took five of our seven children along for the experience. It was grumpy's 7th birthday and he wanted to share it with his siblings (ahh!)

So we took him, plus my 9-year-old daughter, 10-year-old son, 14-year-old daughter and my 19 (almost 20) year old son who was invited at the last minute as his 16-year-old brother had an interview. (which was successful -yay!)

Right from the beginning the Shrek Experience is immersive as you are ushered into the departure lounge for your trip to Far Far Away.


All of the children found it exciting, funny and interesting throughout- top marks to Shrek's Adventure for entertaining children who are used to high quality games consoles and the constant stimulation of our electronic world and scoff  marvel at our nostalgic memories of Pong.

Even our almost 20-year-old admitted he enjoyed himself and was impressed by the quality of the 4D ride in particular. If you want to fly with the How to Train Your Dragon dragons- this might be your only chance!

I don't want to spoil the experience for anyone planning to go so I won't give any more away but suffice it to say a plot soon develops and you are whisked along an action packed, entertaining and highly amusing adventure along the corridors of County Hall which have been transformed into a swamp, pub and a whole host of other locations complete with sound, smells and some unexpected 4D surprises.

The highlight of the experience was most definitely the ride on the magic bus which managed to take off despite the natural reticence of the very British group we were part of who were not altogether keen on joining in, pantomime style.

The characters are amazing. The show (for that is what it is fundamentally) is slick, the actors talented and even the fake American accents work in the context of the experience. Apparently DreamWorks stipulated that the actors must speak like the characters in the films to make the whole thing more authentic - fair enough. 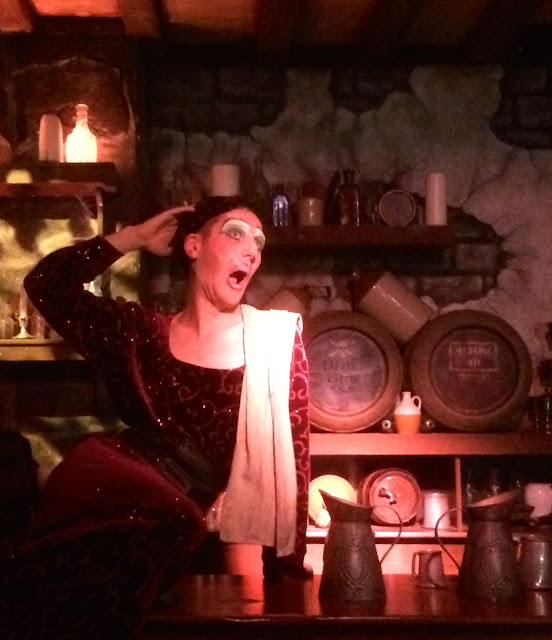 The best thing about Shrek's Adventure is that because it works on so many levels it truly is a great trip for the whole family.  Some of the children in our group looked to be under five (note-buggies have to be left in a special room at the start of the experience) but I only saw one child who had a bit of a wobble during a particularly dramatic moment when the room went dark and a "witch" appeared.

On the whole though the experience is so light hearted I think most children would be fine with it. My youngest is really not keen on sudden loud noises or new situations and he enjoyed it thoroughly! Of course, like all Shrek movies, the adventure has a happy ending.

Like many attractions nowadays there were the inevitable stops to pose for pictures against green screens, and at the end you could buy a nice album with these pictures in for £25. We didn't buy ours but we saw lots of people who were buying theirs. It was a particularly nice souvenir I have to say.

But what was nicer was that there were opportunities to take your own pictures at some points of the adventure. Although no photography/filming was allowed during the main parts of the experience, this just helped to fully immerse the group in the story without the distraction of a myriad of glowing smart phones in view. 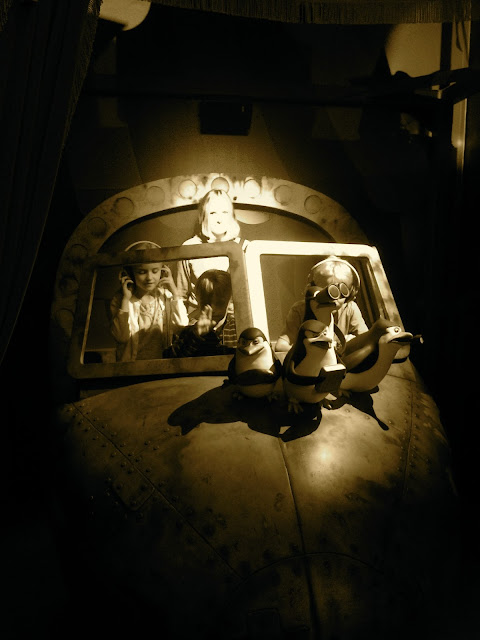 NB: Some of the pictures I have published here were taken during a special blogger tour when the no photography ban had been lifted for obvious reasons!

Now - the experience does not come cheaply if you only plan to do it as a standalone day out and buy tickets on the door, but there are lots of deals online including 10% off simply by booking in advance on the website.

If you are planning a short break, holiday or a busy day out you can make big savings by buying a bundle of attraction tickets which can include Madame Tussauds, The SEALIFE London Aquarium, The CocaCola London Eye and The London Dungeon. There are lots of combinations available.

We did the Shrek Adventure and SEALIFE London Aquarium in one day - more about the aquarium in a separate post.

The Big Bus Company also offers discounts for most London attractions and the bus routes will drop you off close to them too!

I would highly recommend it as a fabulous treat, especially as it is suitable for pretty much all ages. and being indoors is great all year round whatever the weather. It's, it's... well it's Shrektacular!

The attraction is easy to find on the Southbank, just over Westminster Bridge near the London Eye and next to the London Dungeon and SEALIFE London Aquarium.

There are lots of restaurants and cafes nearby and a lovely park where you can enjoy a picnic and play in the free and securely fenced adventure playground.

We chose to picnic after packing all of Grumpy's favourites. This meant it was a bit of a beige lunch as you can see! Well you only turn 7 once and if you want to celebrate eating sausage rolls and crisps - oh and the inevitable brioche - why not? 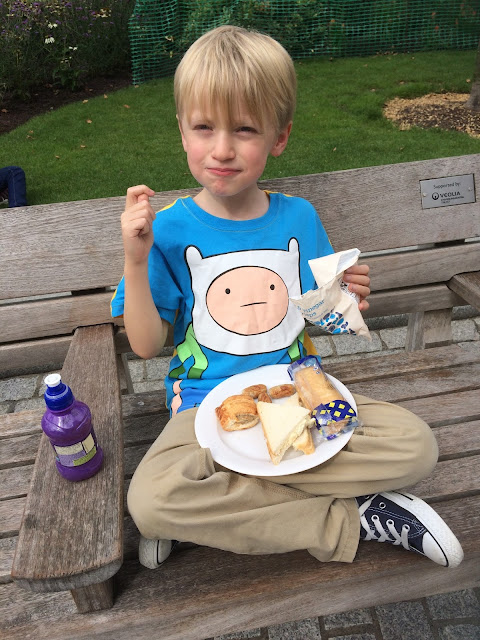 Disclaimer: We were gifted free tickets to DreamWorks Shrek Adventure for the purposes of this review. Views and opinions remain honest and my own.