Celebrating 50 years of the Royal Garden Hotel in Kensington, London AND an exciting competition #RGHGoldenMoments

on October 03, 2015
There's something special about cupcakes. Indulgent little treats which delight anyone with a sweet tooth and are generally gorgeous to look at too bringing an element of fun to any event.

For our 20th wedding anniversary celebrations a very lovely mum from my children's school offered to bake and decorate 150 cupcakes which was topped with one larger cake to create a wedding cake-type centre piece for the garden party which followed our vow renewal in church.

And recently the Royal Garden Hotel in Kensington created an enormous "golden moments" celebration cupcake to kick off a year of celebrations organised for the 50th anniversary of the iconic hotel opening. 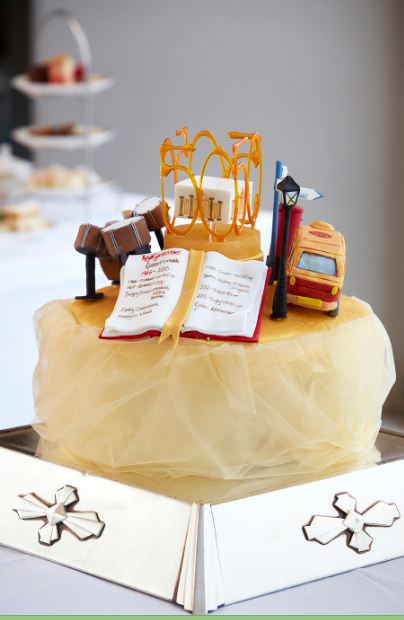 Located in Kensington High Street on the doorstep of London's attractions, overlooking Hyde Park and with Kensington Palace next door the 5 star luxury Royal Garden Hotel boasts 394 rooms, some with spectacular views of the city skyline, 17 magnificent suites, car parking, award winning restaurants and prides itself on being family friendly.

They are currently offering a 50% discount for connecting rooms at weekends or you can have up to two adults and two children in one room (cots are available of course). They can arrange or advice on family activities, they offer a children's room service menu and an early dining option for guests with children. They offer toys for the rooms or nearby park and breakfast inclusive packages with free breakfast for young guests.

Anyway, back to the giant cupcake!

These include the time the Royal Garden Hotel hosted the winning 1966 world cup football team - it's a popular destination even today for many top footballers and also the hotel of choice for many teams from the world of rugby and cricket.

Other famous faces who have spent time at the hotel include Rod Steward, The Beatles and Justin Beiber. Bloggers know it as the luxurious venue where the Flea Enterprises MAD Blog Awards have been held in recent years.

The special cake also features a model of a commemorative book being filled with "golden moments" -memoirs from guests and staff alike- and a tiny branded London taxi just like the real one which has been commissioned to mark the milestone anniversary. 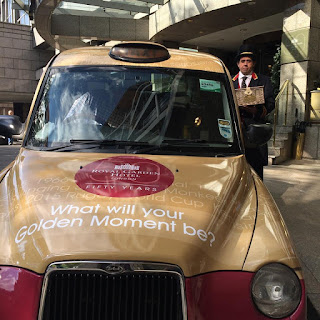 Tempting as it is to sink your teeth into the giant cupcake you will not be able to as it is going to be used as part of a very exciting competition - more on that in a mo.

You will however be able to enjoy a smaller limited edition "50th cupcake" to be served with traditional afternoon tea until July 31 2016 along with the usual delectable selection of sandwiches and fancies. Is it just me that thinks booking this treat would make the absolute perfect 50th birthday present? 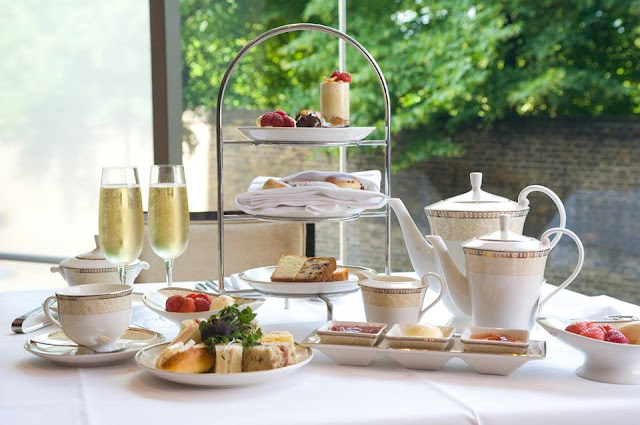 Now, back to that exciting competition I hinted about earlier. Throughout the year one lucky afternoon tea diner can to win an amazing prize every month and loyal fans can have a go at winning an afternoon tea experience through Facebook and Twitter competitions; all they have to do is guess the correct location of where the cupcake is hidden around Kensington.

Steve Munkley, Executive Head Chef at the Royal Garden Hotel, comments: “We are delighted to present the Golden Moments cupcake to mark what is promising to be a very exciting year for the hotel. We are taking the opportunity to celebrate our 50th anniversary and thank our guests over the course of the year with the introduction of a limited edition 50th cupcake”

Jonathan Lowrey, General Manager at the Royal Garden Hotel, adds: “We pride ourselves on offering friendly and intuitive five star service, and so to reach this milestone is a real achievement for the hotel and its staff. This, along with our stylish and luxurious rooms, restaurants, and of course great Kensington location, has all contributed to our success over the past fifty years.”

To book your afternoon tea with the limited edition 50th cupcake or for more information about the Royal Garden Hotel’s 50th celebrations visit www.royalgardenhotel.co.uk/50years and share your #RGHGoldenMoments on social media.