A day in Berlin, Germany on a budget

on January 27, 2016
Given the opportunity to spend just one day in Berlin we decided we didn't want to see the usual touristy things like the Brandenburg Gate or Checkpoint Charlie - so we turned to bloggers to point us to some more unusual sightseeing venues.

I am slightly obsessed with food markets but it seems most of these happen at the weekend in Berlin. Luckily on Tuesdays and Fridays you can visit the Turkish Market in Maybachufer, Neukolln between 11.30am and 6.30pm. 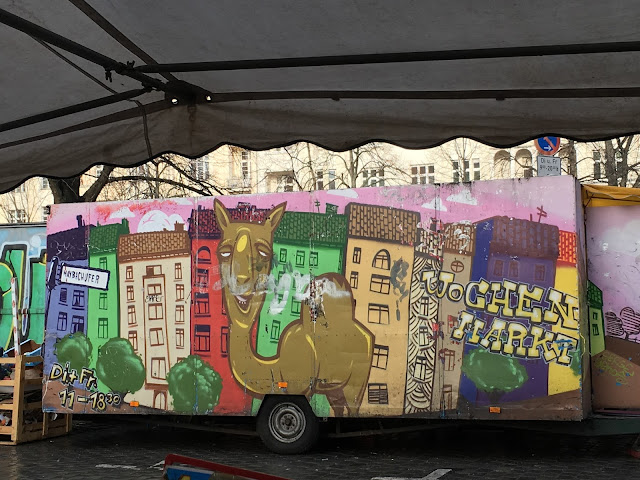 It's best to use the U-bahn or S-Bahn in Berlin but we had driven in and managed to park on the bridge over the river which runs alongside the market.

I was delighted to see it wasn't at all touristy with lots of people obviously there simply to buy their vegetables, fabrics and Turkish salads and sweets.

I'm a little embarrassed to say one of my favourite stalls was not Turkish at all but I just could not resist the colourful display of largely Polish enamel-ware. I bought a saucepan and a bowl and am already regretting not buying the cute milk pan too. 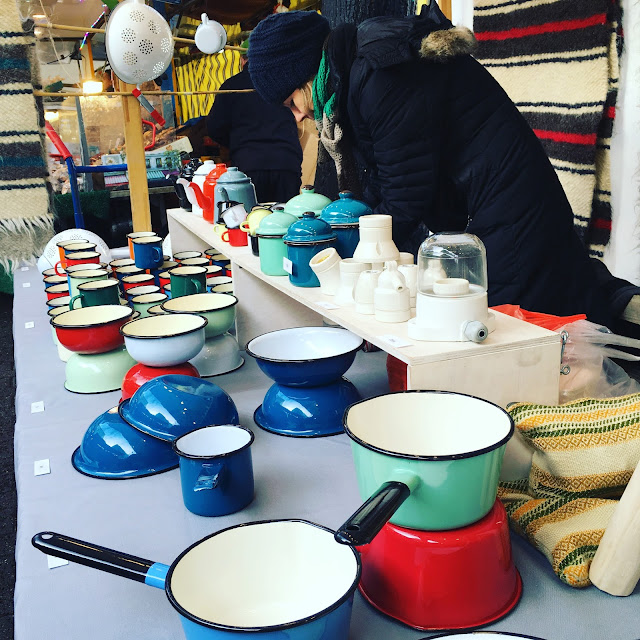 Getting hungry we chose one of the busiest stalls, a long trailer selling all sorts of aromatic foods. My friend Claudia and my husband chose hot pastries stuffed with spinach and cheese while I went for a large cauliflower fritter served in a thin pitta with Tzaziki. I will be researching how to make them! 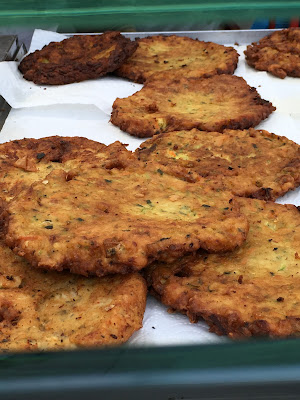 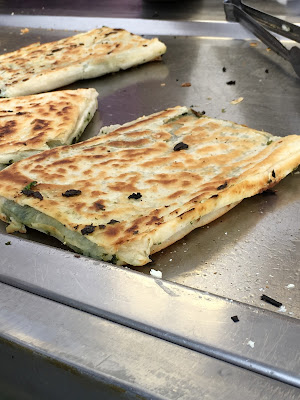 Keen to explore another market we headed for Markathallen Neun or Market Hall 9. It's famous for its large markets on Fridays and Saturdays.

It only has a small market on Tuesdays but catered to my love of food and kitchen equipment with a marvellous Italian bakery stall where we tasted cinnamon and sugar focaccia and bought a gorgeous artisan loaf, and a very small but packed kitchen good stall where I managed to control my urge to buy everything and only came away with a wooden washing up brush. Yes - I am aware this is a bit tragic! 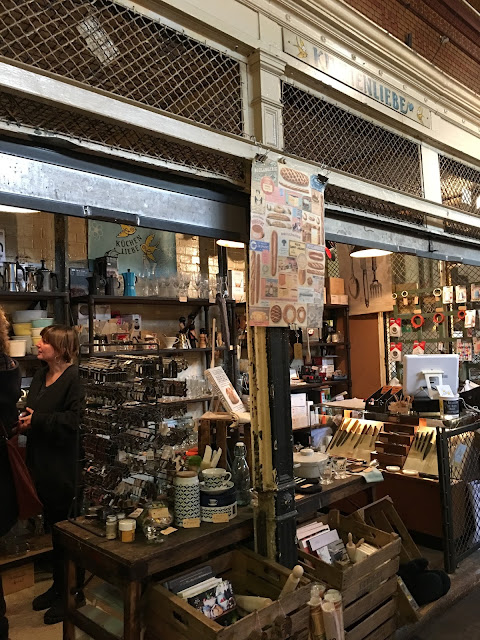 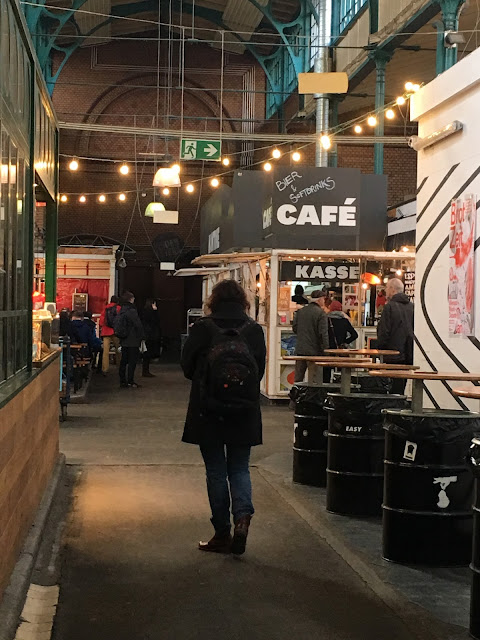 It's a nice little market, quite Hipster heavy, but offers great options for a good quality coffee stop or lunch. My friend says it's really lovely when the full market is on.

What to do now? Back to the bloggers were we found recommendations from Emily from I Ride the Harlem Line as to which U-Bahn stations were worth visiting in Berlin.

We headed for the U3 line (the lines are numbered instead of named like our UK London Underground) and after buying a day ticket for €7 which would allow us to use all of the city's transport options we went to explore the three stations Emily recommended. 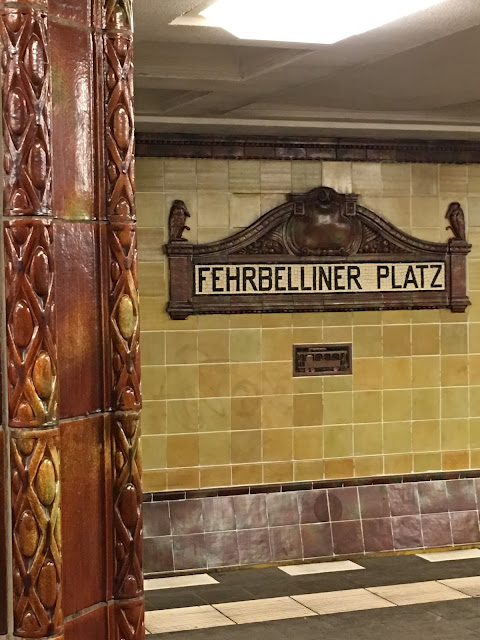 These were Hohenzollernplatz, Fehrbelliner Platz and Heidelberger Platz, all designed by architect Wilhelm Leitgebel and all opened in 1913. 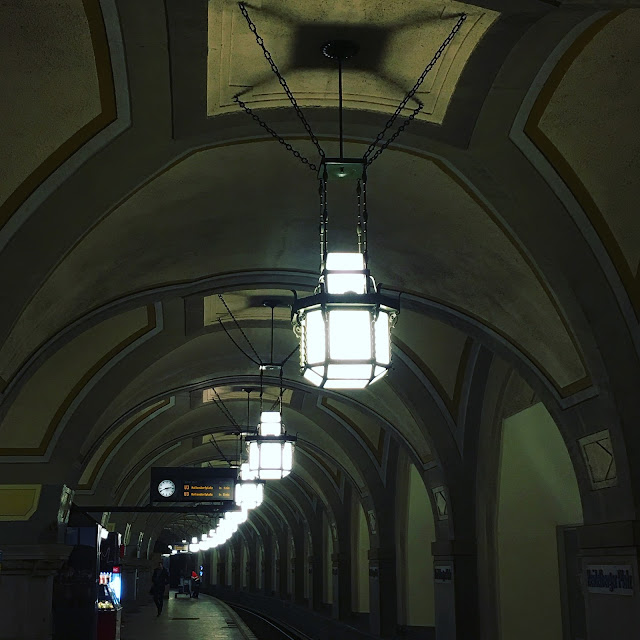 The columns at the Heidelberger Platz feature a variety of woodland animals all by sculpture Martin Meyer-Pyritz.

We emerged from the U-bahn at Potsdamer Platz where a small lone graffitied bit of the Berlin wall stands looking rather incongruous with the background of bright lights and western commercial businesses which now crowd this formerly desolate area which was divided by the wall - part of Potsdamer Platz in East Berlin, part in the west with no mans land in the middle. 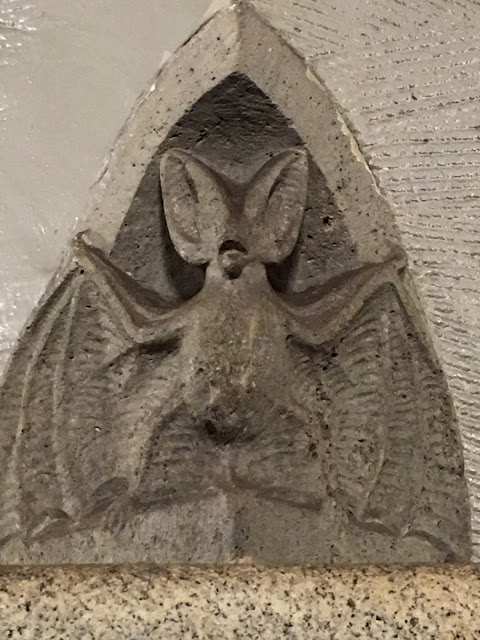 The area is unrecognisable now from those grim days with a colour changing canopy over the Sony Centre, a giant Lego giraffe and a huge multiplex cinema, restaurants, shops and offices. 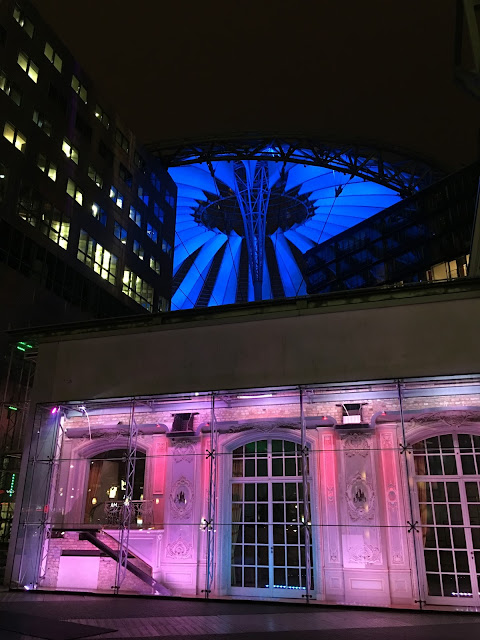 There is a reminder of the past with a glass protected facade (pictured above) which is all that remains of the Hotel Esplanade which once played host to Charlie Chaplin and Greta Garbo. What survived from the wars was due to be demolished completely but the fragment you can see today was moved 75 metres at great cost to preserve it. 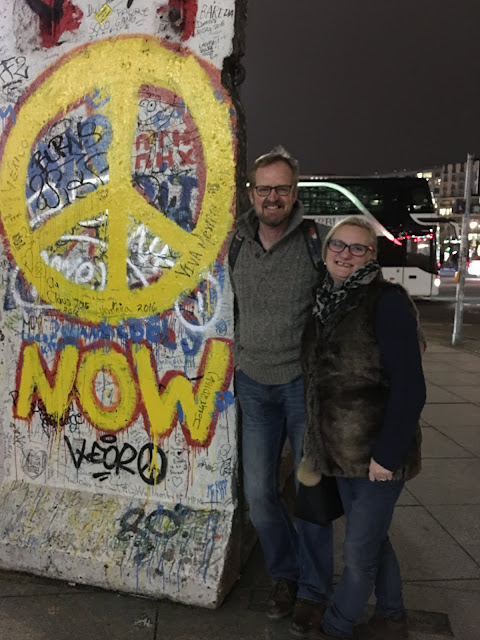 Having our transport ticket we decided to make full use of it and travelled on trams, S-bahn, U-bahn and the fabulous 100 bus which is a normal bus which just happens to pass most of the famous buildings and landmarks tourists want to see. We managed to get front row seats for most of the trip and my German friend proved an accomplished tour bus guide. 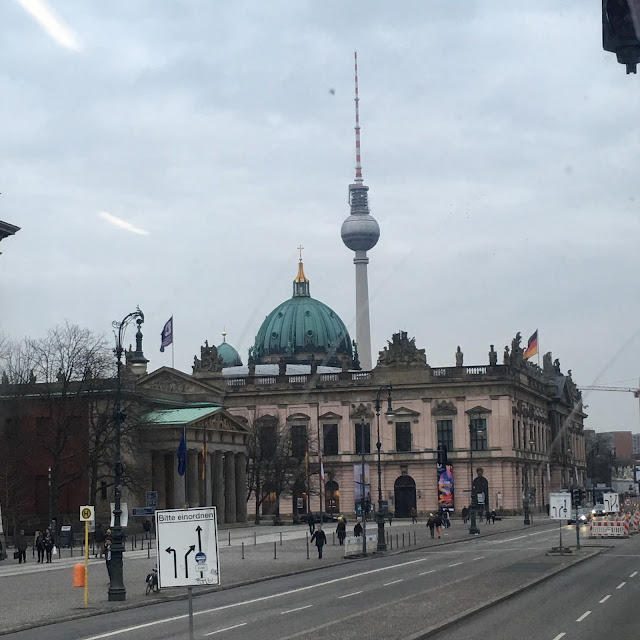 We stopped in Alexander Platz for a great view of the 365 metre TV tower and to sample a bratwurst cooked on a grill worn round the waist by the vendor. 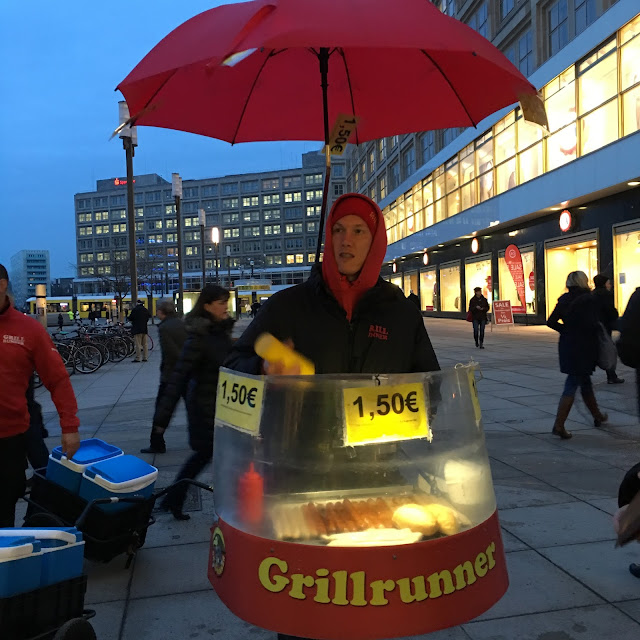 My friend remarked she thought this would be OK in the winter but not so much fun when the weather is warmer! I thought the whole contraption looked like the making of a bad back for life actually. The sausage was very good though and was a bargain at €1.50. 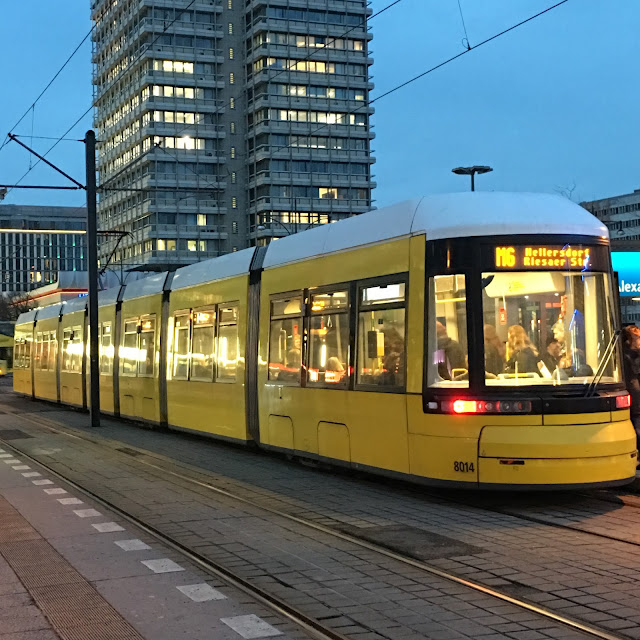 We visited Berlin just after the fall of the wall and were amazed how much the city has changed. The main symbol left over from the East were the shape of the red and green men on the traffic crossings. 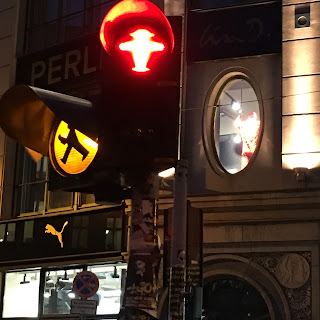 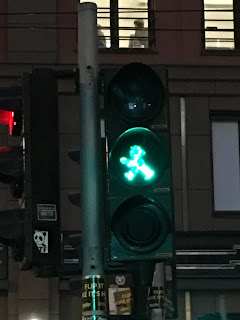 The Ampelmann now has cult status and now in Berlin you can buy just about anything you can think of featuring the design used in East Germany. The figures almost disappeared being replaced by the western version but an outcry ensured the survival of the crossing man with a hat.

It was a fabulous day out and was very budget friendly especially with the transport ticket which you can buy very easy with multi-lingual machines at stations. You can download an app with the transport maps and we found on the whole local people were very happy to be stopped and asked for directions.