on February 15, 2016
Half term can be difficult in February - the weather sometimes plays nice but equally you can end up with a week's worth of cold rainy days so it's handy to have some new movies on hand for the children to watch. 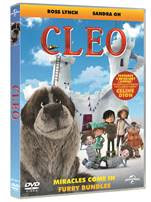 Out this week on DVD and digital download is CLEO which is described as "A fun-filled family animation for boys and girls."

This entertaining and heart-warming animation introduces eleven-year old Luke and Sophie who, aided by Cleo the dog, rally the children of the town in a snowball fight to claim the rights to their precious fort. Together they embark on an adventure that brings the whole town together and shows that you can find friendship in the most surprising circumstances.

I showed the movie to a group of bored children aged 7-15 and I have to say it seemed to grip them. I took the opportunity to slope off into the kitchen and have a peaceful cuppa and a chat with my friends (and mum to four of the children watching).

We knew the film was over when the children came wandering into the kitchen. They told us they enjoyed the film but this is not your typical kids film with all sweetness and light.

I don't want to say much more to avoid spoiling it but the story does involve a theme of war ( in the form of escalating  snowball fights and fort building) and there is one death.

Having said that, none of them were upset by this and all said they enjoyed the film. I'd suggest though if you have a particularly sensitive child you might want to watch it through first. It's a particularly good film for boys and would be great to watch as a family as it could well lead to some good openings for conversation about the themes in the movie.

Discover a most unlikely hero when CLEO scampers onto DVD and Digital Download 15th February 2016.

Disclaimer: I received a free download of the movie for the purposes of this review. Views and opinions remain honest and my own.
CLEO DVD family films film half term movie review