on March 21, 2016
I have to confess to a weakness for hot cross buns. Hmm, well not so much a weakness as an all consuming obsession with the things which can see me devouring more than one  four (or more) in a sitting. 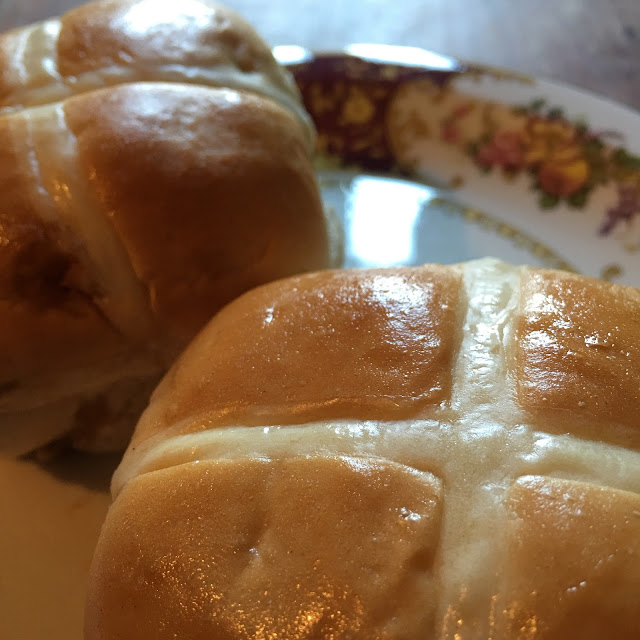 This was bad enough when hot cross buns were entirely seasonal but some supermarkets now seem to stock them sporadically through the year. I have to march myself past them, ignoring them as one might ignore the loud, smelly drunk on the night train.

Of course this week is Holy Week in the UK for C of E folks like myself so since Good Friday- the day you traditionally scoff hot cross buns - is almost upon us I have generously and selflessly taste tested a variety of buns just so I can write about them for you. You can thank me later.

First, a bit of history about hot cross buns. Although they feature a cross, usually made of pastry or icing or lines cut into the bun which would imply an entirely Christian significance, the origins of the small spiced buns goes back to Pagan times when buns with crosses on were eaten at Spring Festival.

They became extremely popular in Tudor times but for a long time bakers were only allowed to make such rich treats for special occasions- burials, at Christmas and on the Friday before Easter.

The traditional recipe of course is a picked bun with dried fruit but modern-day bakers have become a bit more creative with the bun and now you can get them in a variety of flavours.

I tried some of the range from Asda - sticky toffee with sweet fudge pieces, double chocolate with milk and white chocolate chunks and apple and cinnamon with raisins and a pinch of cinnamon.

Now I can hear the purists among you taking a sharp intake of breath and I can feel your disapproval wafting along the interwebbysphere. But let me tell you - don't knock it until you've tried it.

I used to turn my nose up at "posh" buns with citrus peel or unicorn floss or whatever but those sticky toffee hot cross buns are actually one of the nicest bun-type treat I have ever eaten. And I eat a lot of bun-type treats. 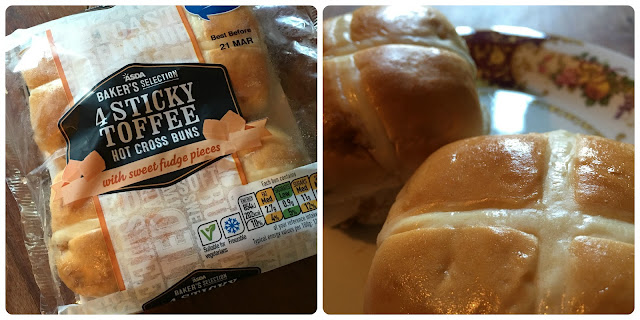 I tried one with butter but actually you can just eat them straight from the packet, uncut, unbuttered, one after the other. Apparently. *guilty face*

Moving swiftly onto the chocolate buns I decided I had better share with a friend to prevent another bun-scoffing pig-fest. She asked for hers toasted and buttered - I had mine untoasted with butter. 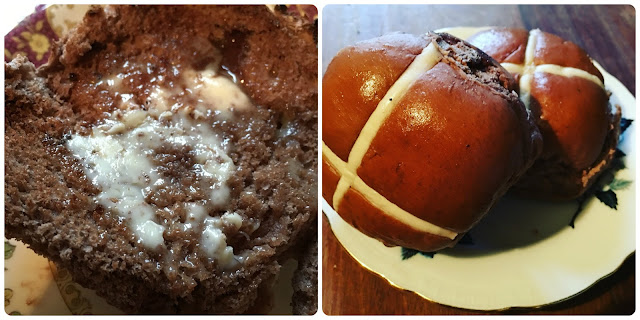 Both ways were delicious although the smell of hot chocolate toasting was divine. Not really like a hot cross bun to be honest, apart from the cross on the top, but gloriously chocolatey.

You'll notice I left the apple and cinnamon version 'til last. These are most like a traditional hot cross bun but with a slight twist.

The flavours of cinnamon and apple were not overpowering and again, the buns were equally nice toasted and not toasted. I shared with three friends this time and patted myself on the back for not being a greedy so and so. They all gave the buns a big thumbs up!

All the varieties of buns were soft and squishy even after a couple of days. They are suitable for vegetarians and are freezable.

And if Hot Cross Buns are not your thing it's still worth popping into Asda this week as they have a huge range of Easter baked goodies including an Extra Special Simnel cake and a cute chick cake.

They also have a wide range of Easter Eggs maybe laid by the #GiantHen?  I will be once again sacrificing my waistline to taste test some of their eggs tonight - blog post will be up tomorrow.

Asda of course also stock everything you could need for a perfect family Easter lunch.  I'm still trying to decide whether to cook roast beef or a traditional roast lamb. Whatever -there will be roast potatoes and Yorkshire puddings.

Disclaimer: I have been sent a selection of Asda Easter goodies for the purposes of this review. Views and opinions remain honest and my own - and of my bun-eating friends!