on March 11, 2016
We love Lego movies- perfect family viewing to suit all ages, even the adults in the house, as the films work on so many levels and feature lots of great characters, comedy and adventure.

The latest offering from the franchise is Lego DC's Justice League: Cosmic Clash which features some of our favourite superheroes - in Lego form of course. 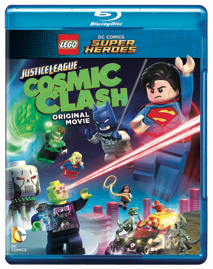 The movie blurb asks the question: "Can Batman and Superman prevail against an unstoppable intergalactic machine with the power to bend time itself!?"

Batman, Superman, Wonder Woman and the rest of the Justice League battle to defeat the super-intelligent, hyper-obsessive-compulsive, super-computer Brainiac.

Until now the Justice League has triumphed over every foe who has challenged them, but all of those enemies had one thing in common-they were alive! With the fate of the Earth and the Justice League at stake, can the World’s Greatest Detective outsmart the most evil supercomputer in the Galaxy?

In  the movie Brainiac is combing the universe for new additions to his collection of worlds when he stumbles upon Earth, which he decides would make an excellent addition to his collection. However he quickly discovers, Earth has a ‘firewall’ – the Justice League.

When Brainiac cleverly displaces several members of the Justice League to other time periods in Earth’s history, Batman, Flash and Cyborg must build and use the Cosmic Treadmill to race across time to retrieve their comrades – while members of the Legion of Super Heroes attempt to hold off Brainiac’s assault.

As you might expect the film is a riot of fun and action and the storyline jogs along nicely with lots of  jokes and enough action to entertain older children without scaring younger viewers.

Grumpy (aged 7) insisted on watching the DVD three times in a row so I think you can count that as a resounding recommendation from him. And the fact that his older siblings (up to age 16) allowed him to watch it on a loop shows that they enjoyed it too.