on April 28, 2016
I love those programmes about border control and immigration where they question the incoming passenger about why they are trying to enter Australia/Britain/America.

They ask them what they are hoping to see - and usually get predictable answers like the Sydney Opera House or the White House. I heard one today where the unfortunate chap being questioned replied that he was hoping to see Birmingham Palace. Oops!

I wonder If I'd be caught out if I was stopped while travelling as the main thing I want to see is a selection of menus!

I'm off to Cyprus again in June to see my mum with husband and teenage son and our planning so far has consisted of where, when and what we will eat. Never mind about all those preserved antiquities and global heritage sites- we are most interested in where we can get the biggest pork chop. 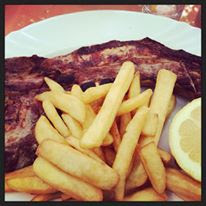 A note on that - have you ever had a Cypriot pork chop? They are cut differently to our puny British offerings and literally hang off the plate. Everywhere you go there is pork on the menu but in ten years of visiting I have yet to spot a pig. I think the farmers must have them all under cover out of the sun as pigs do suffer with sunburn.

I actually tend to lose weight on holiday. Someone said to me that's because you are more likely to eat light foods like salad - yeah right. Have you met me?  I think it's because the warmth from the sun and sessions in my mum's hot tub eases my Fibromyalgia symptoms and I find it easier to walk further, swim and even cycle short distances on flat ground. 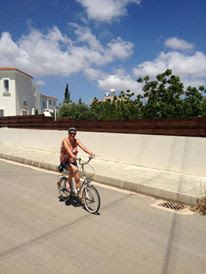 I do eat more fish and seafood when I'm abroad. I suppose because it's abundant in Cyprus it's cheaper than here. And at lunchtime I will quite happily eat pitta with healthy tzatziki rather than the toast with butter and marmalade I tend to scoff here.

So what type of food can you expect to eat in Cyprus?

Well it's very similar to Greek food. It's very family friendly as a lot of it is quite simple and not generally spicy so most children (and fussy eaters) will find something on most menus to eat, even in traditional tavernas.

There's a lot of grilled, stewed, slow cooked or barbecued meat and of course lots of fish, often accompanied by salad or chips, rice, or Cypriot roast or boiled potatoes. 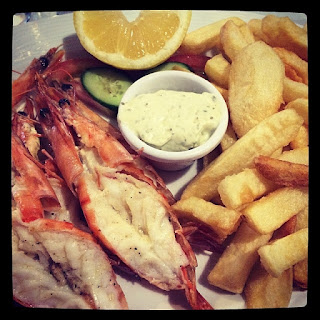 Souvla or Souvlaki is in my top ten for wonderful holiday food. It's literally skewers of meat, usually pork, chicken or occasionally lamb It might be served alongside a salad or another side dish or in a pitta as a sandwich. Gorgeous topped with yogurt, minty and cucumber dip tzatziki. Souvlaki has smaller pieces of meat than Souvla but otherwise they are fundamentally the same thing.

Moussaka is a traditional favourite. A sort of Cypriot take on lasagne with aubergine/eggplant layers in between baked mince (usually pork or lamb) and béchamel layers. Tavernas often offer their own homemade version which might well have been made from recipes passed down for generations.

Homemade Kleftico (pictured left) is another gem to look out for. Lamb is cooked for hours, traditionally in a clay oven with lemon and cinnamon.

Many villages still have communal Kleftico ovens which you can spot by the roadside or in the village square - they are used especially to prepare food for special occasions and religious festivals.


Be warned though - it can be a bit hit and miss. A big group of us (well, my family but we are a big group!) were given Kleftico at my mum's village's peanut festival and the quality ranged from melt in the mouth meat to soggy lumps of fat. It's not always lamb either - sometimes they use goat but I defy anyone to tell the difference once its cooked.

Hankering for sausages while on the island? Don't hunt for cafes offering "English style" sausages, be brave and try Cypriot Loukanika.


Probably not best served as part of a fry-up though as they are solidly meaty and sometimes soaked in red wine.

There are many versions, utilising different herbs and sometimes they are smoked but  traditionally they are pork and lamb and flavoured with orange zest. You often find them as part of a meze.
Now I am aware I am making Cyrpus sound like a meat-lovers paradise - which it is - but vegetarians are very well catered for too.

Halloumi cheese is everywhere in sandwiches, grilled, barbecued and I've even seen it used in a Cypriot cooked breakfast alongside olives.

Then there's the classic Greek-style salad which in Cyprus is so much more than a side dish. Yemista is stuffed vegetables, normally peppers, tomatoes, aubergines or courgettes and if you eat fish you will find plenty of choice.

I love octopus and calamari, battered or simply prepared with a drizzle of lemon juice. My son shares this love and as a small child surprised us all by rejecting the predictable kid's menu choice of burger or nuggets and chips for a huge pile of pan-fried octopus.

He's the one coming with us to Cyprus soon and as a huge fan of seafood and fish generally I am looking forward to some amazing meals, hopefully outside in the sunshine with a view of the beautiful Cypriot sea.

Some restaurant recommendations in the Paphos area:

The Klimataria Taverna in Mandria village, about ten minutes drive from Paphos airport. Quite simply my favourite place on earth.

Although not as simple and traditional as it was it's still worth a visit if only for awesome and enormous pork chops which you can eat under the grapevine with a view of the town square. We get lovely friendly service from Spiro and his wife Christina and occasionally from Spiro's Dad Yianni - we actually call the taverna Yianni's as he was in charge when my mum first moved to Mandria.
I've wasted many hours watching the world go by there. Also a great place for a Brandy Sour, the island's drink.

Ocean Basket which is actually South African with restaurants in Africa and the UAE as well as Cyprus but trust me - although not traditionally Cypriot this one's worth a visit. Expect giant platters of mixed fish and/or seafood or simple fish and chips. 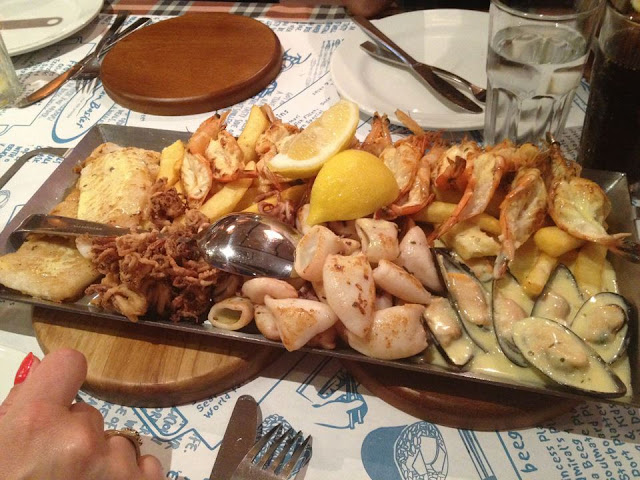 Talking of fish and chips, back in Mandria you can get (IMHOP) the best fish and chips on the island. Mandria Fish and Chips (no points for originality but lots for food quality and quantity) offers the usual favourites plus wonderful garlic prawns, piles of crispy calamari and other island treats. It well deserves it's 4.5 out of 5 Tripadviser rating. You can eat in or outside and get takeaway too. Booking advisable!

These recommendations are based on my last visit - I will update with some new gems after my visit in June 2016. This is NOT a sponsored post.