on June 15, 2016
Our family loves potatoes in pretty much every form so over the years I have developed many ways of making them more exciting. We especially love Jersey Royal New Potatoes which are low fat, low cal, high fibre and low GI which is perfect for those looking to cut down on carbs for whatever reason.

For the two recipes I'm sharing today I used Asda's Extra Special Jersey Royal potatoes which really are extra special! Distinctively sweet and nutty the potatoes are hand planted and have been grown in Jersey since 1880 by farmers who still fertilise their crops with seaweed.

They are delicious just gently steamed with a smear of salted butter and a sprinkle of ground black peppercorns but there are so many other ways you can use these useful veg without the need to scrape them like my granny always did.

The first recipe is quick and simple and perfect for family dinners, to serve alongside barbecued food, as part of a traditional roast dinner or even with chunky sliced ham. 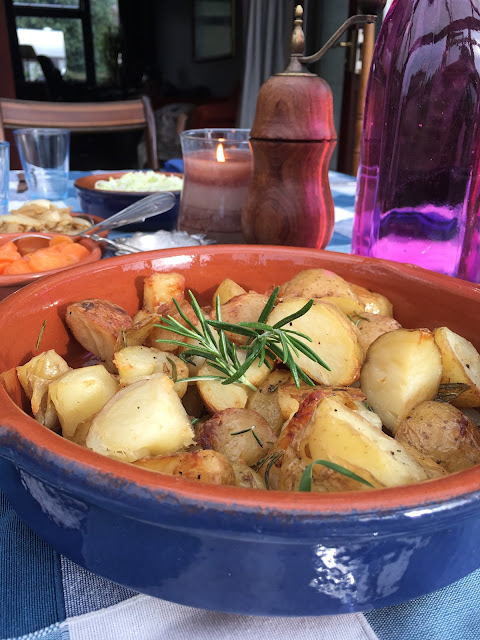 Simply chop larger potatoes into half, leaving smaller ones whole if you like although I find they are fluffier if you slice them.

Par boil until just soft, drain well then toss in pre-heated oil as you would with "old" roast potatoes. Sprinkle fresh rosemary (and garlic if liked) over the potatoes along with a grind of sea salt then roast for about 40 minutes at 160c (fan) 180C, 350F, gas mark 4.

Turn occasionally until potatoes are just brown and crunchy round the edges. 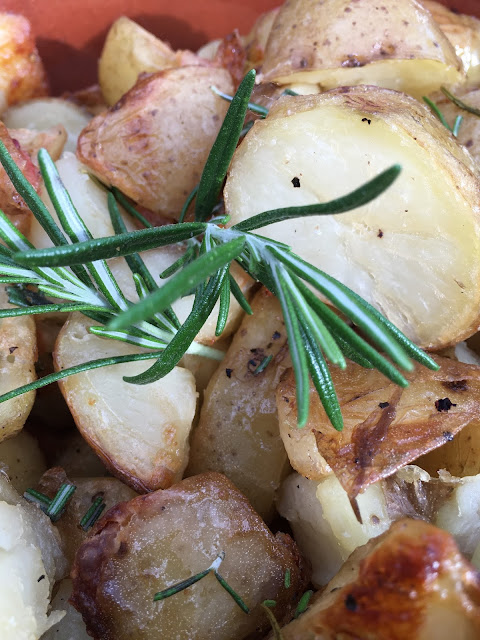 I served my roast potatoes alongside pork chops which had been marinated for two hours + in French lager on a bed of sliced white onions (method below), steamed carrots and a raw leek salad.

Chops:
Use a fattier cut of chops if you want the beer to really permeate but lean chops will work too. Allow one or two chops per person depending on appetite. Thinly slice 1 large onion and place onion then chops into a dish. Pour beer over chops and turn at least once during marinating basting chops with beer.

Remove chops from marinade and grill or BBQ. Drain onions and fry until brown.

I also served a raw leek salad - don't grimace, it's really tasty (and this from a known salad avoider!)

Leeks:
Prepare salad at least two hours before meal (this is great as you can do it when you prepare  pork marinade)

Thinly slice 2 leeks, grate one apple into bowl and add 2-3 TBSP Greek yoghurt and 1 TBSP mayonnaise. Add salt, pepper, a pinch of sugar and the juice from half a lemon and mix well. Leave for two hours and mix again before serving. 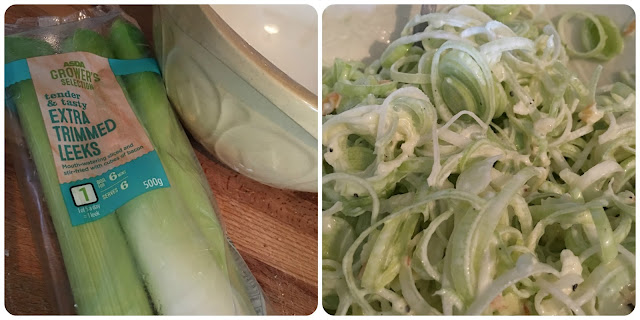 Trust me it's a mild but tasty salad which even my children enjoyed.

Plus as I mentioned , low GI so great if you thought you had to give up potatoes as part of a low carb diet.

OK so onto recipe number two- German style hot potato salad with bacon. Tangy and sweet at the same time.

Confession. This is not my own recipe-Years ago my children's school had an international day during which parents with foreign connections came in and spoke about culture, language and food.

At the end of the day we had a lovely food tasting session and I came away with a handful of recipes. This one I have hung onto and made over and over again over the last decade. The lady who shared it originally has sadly since died from cancer but she was a warm and generous soul who loved a party and I think she'd be very pleased I was sharing it with you.

Method
Wash and if necessary chop potatoes into even sized chunks. They need to be quite small so the potato is cooked through but not disintegrating. Boil potatoes until just soft.

Cook bacon, set aside. Heat oil or bacon drippings then using a wooden spoon or whisk blend in flour, sugar, salt and mustard. Gradually add vinegar and water, stirring constantly until smooth. Continue to cook over a low heat until sauce thickens. Add potatoes and bacon and stir gently coating them with the sauce.

You can serve immediately while hot but it's also nice when it's cooled down.

I teamed the potato salad with flat iron steak cooked quickly on a cast iron griddle. You could also BBQ it. I topped the steak with seasonal steamed and buttered asparagus. 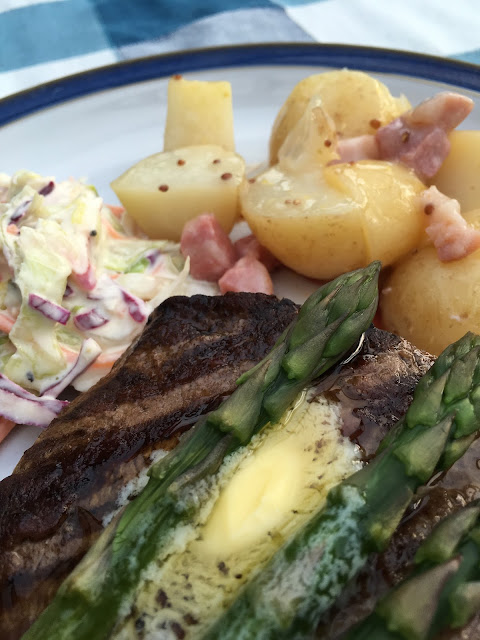 I also made a colourful and crunchy coleslaw made using Asda's very useful coleslaw kit. I love this kit - all the fresh vegetables are ready sliced in a bag and there's even a sachet of creamy dressing enclosed although I did add 2tbsps low cal mayo and 2 tbsp salad cream as we like our coleslaw extra creamy. 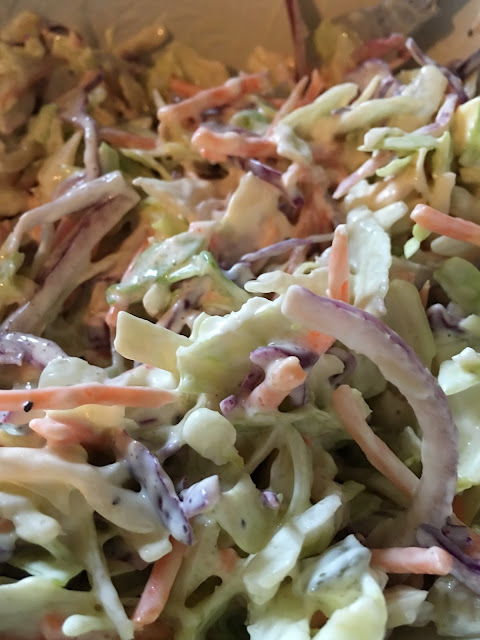 I prefer coleslaw made like this to the ready made pots and I think the colours look awesome on the plate.

I felt very happy knowing my family had enjoyed healthy food which took very little time to prepare and cook. Good news for me when I'm trying to squeeze in dinner in between school, clubs and my own commitments.

Asda's Extra Special Jersey Royals are as cheap as a bag of frozen chips and much healthier and tastier so Id recommend making the most of them while they are in season. 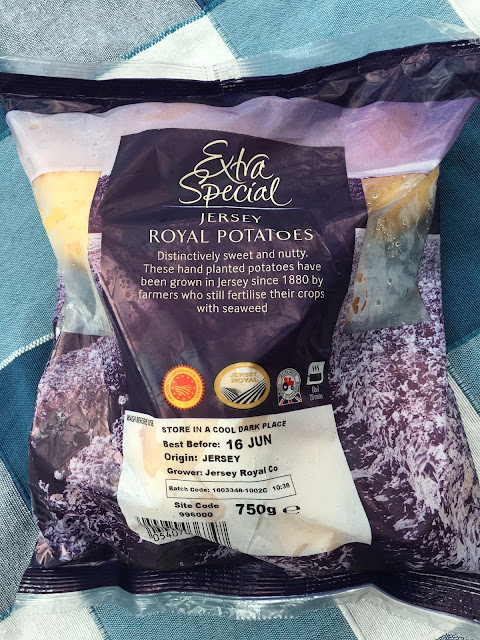 Disclaimer: This post is an entry for the Jersey Royal Blogger Challenge. I was sent a voucher to spend in Asda for the purpose of buying ingredients for these recipes. Views and opinions remain honest and my own.