on September 27, 2016
When an enormous box arrived unexpectedly the other day I was somewhat baffled. I had no idea what could be inside. The children gathered round excitedly as I opened it desperate to see what surprise might be in the parcel.

The gasps of delight and clamour to be the first to play with the box contents made me think this is going to be one popular Christmas purchase if gasps of delight are what you are going for come present unwrapping time! 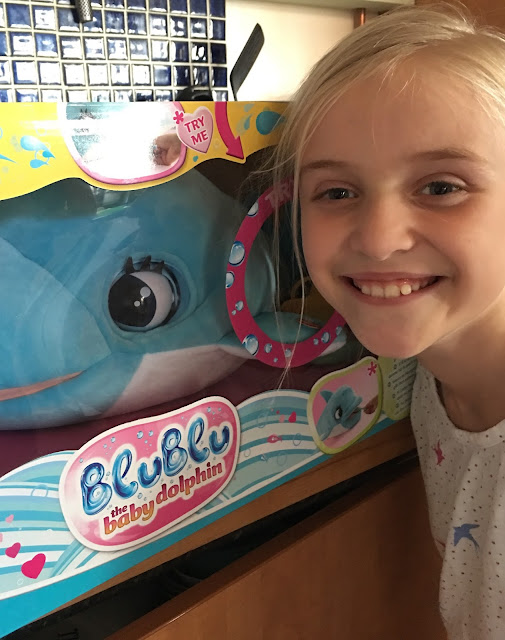 Inside was BluBlu the baby dolphin-a soft plush interactive, electronic yet totally cuddle-able dolphin, one of the Club Petz family from imc toys. I had totally forgotten I had volunteered to review him!

BluBlu comes with a tear-jerking back story - apparently after his birth BluBlu spent the first couple of months with his family but one day, while playing with a small funny clownfish BluBlu became separated from his family and however hard he looked he could not find them. *gulps back sob.*

One day he reached an area of the coast where he could hear lots of noise. He poked his head out of the water and saw a load of children surfing. They stroked him and made friends with him and then the beach regulars visited every day to feed and play with him and BluBlu became the new favourite pet of the Loving Animals coast.

OK so let's brush over the advisability of petting and feeding wild creatures  - BluBlu is aimed at children aged 18 months and up and so far he has been cooed over and played with by a number of children up to the age of 21. And me. I think he's adorable. 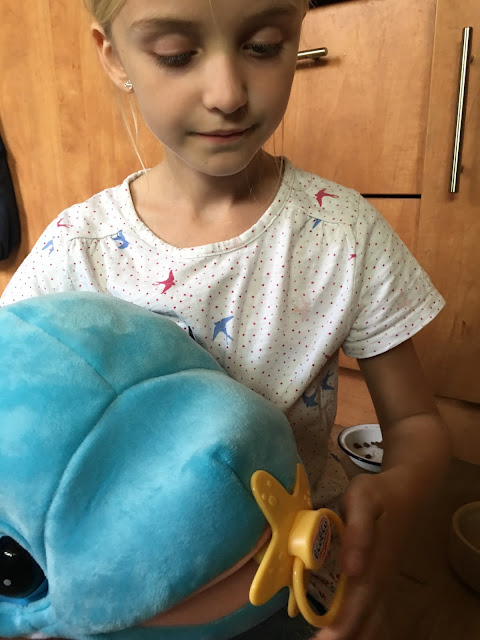 His mouth moves to make cute dolphin noises as he eats his fish and he goes to sleep if you give him his  dummy/pacifier (yes I know but it's very sweet!) or pat him on the head. He cries if you don;t play with him and his eyes open and close too. Parents - you can turn him off using the battery box inside. He comes with 4 AA batteries for demo purposes so make sure you have some new ones (preferably alkaline) for replacing them.

Want to see what he can do? Check out the short video from imc Toys below to see him in action.

He's quite big but quite lightweight so even a small visiting child was able to carry him round. My 10-year-old daughter likes to watch TV resting on him like a big cushion. He's very soft to touch and the perfect level of squishiness for cuddles.

I really think this toy is going to prove a huge hit for birthdays and with Christmas coming up I think BluBlu really has the WOW factor. The girls in my house seemed more interested than my boys but especially given the fact he is blue he would probably prove popular with many boys too.

I did a quick search online and found BluBlu can vary in price quite significantly so worth shopping around. Generally he's on sale for around £40 but I did find him on the B&M website with information saying it was on offer for £29.99 in stores (subject to availability - internet search carried out Tuesday September 27). 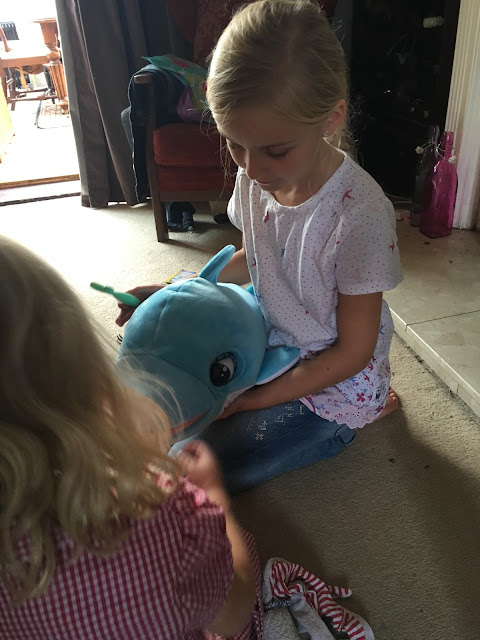 Disclaimer: I received BluBlu the Baby Dolphin free for the purpose of this review. Views and opinions remain honest and my own.