on October 10, 2016
One of my children is a bit odd. Actually all of my children are a bit odd (I blame their father) but the reason I am singling one out in particular is because he doesn't like chocolate.

I know right? Surprising as I ate A LOT of chocolate when I was pregnant with him but even a hint of chocolate, a stray chocolate chip can leave him actually retching. Only this weekend he asked to try his brother's chocolate bar flavoured milkshake and one sip had him throwing up for about ten minutes.

Its not a huge problem generally. Very little chocolate in most of the food we eat daily but sometimes it's nice to make a treat we can all enjoy.

We had a surfeit of cornflakes this week (long story) so my 10-year-old daughter asked to make choc-free crispy cakes as a surprise for her chocolate hating brother.
She mentioned making them previously with golden syrup and suggested we added some mini-marshmallows to make them pretty. 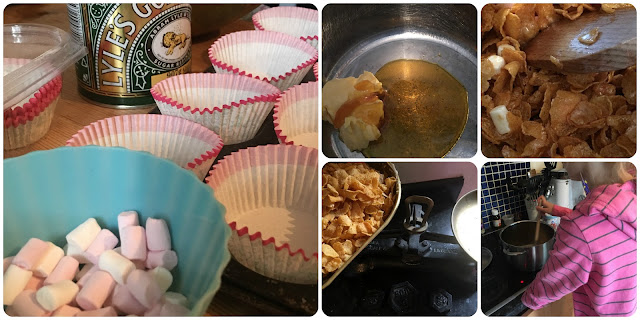 The cakes took literally minutes to make and DD was very helpful licking the syrupy spoon and cleaning out the bowl afterwards. Hmmm.

Melt butter and golden syrup together in a large saucepan on a medium heat then remove from heat and add cornflakes and marshmallows mixing gently but thoroughly until well coated.

Spoon mix into cases then put into fridge for 20 minutes.