on February 14, 2017
One of my favourite memories from my childhood is the lengthy holiday we spent touring Italy where I recall being treated like a VIP by almost everyone we met on our travels.

Italian hospitality is legendary anyway but the people's indulgence of children is almost as famous- I don't ever recall feeling unwelcome even at one memorable late night village festival where us children hurtled around under the stars and lightbulbs string across the square while the adults ate, drank and danced.

Taking my youngest three children for lunch at Spaghetti House in Sicilian Avenue (in that wonderful historic arcade in Holborn, London) recently took me right back to that wonderful holiday. 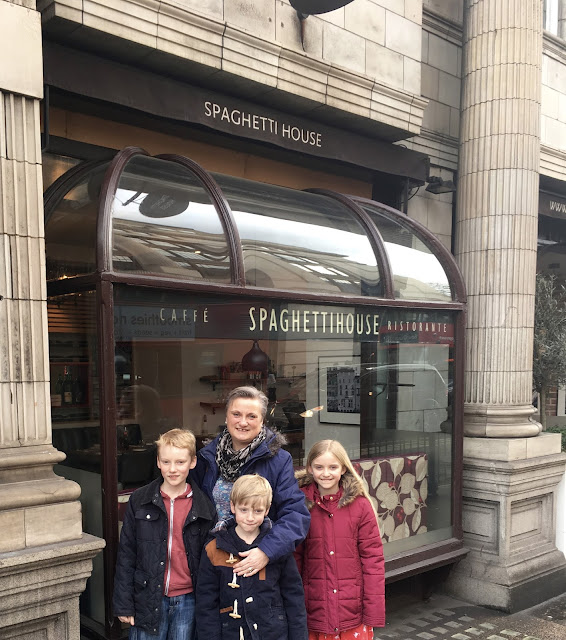 From the minute we walked through the door (way earlier than we had booked due to an unexpected change of plan) we were made to feel as welcome as long lost family.

We were offered a choice of tables, the issue of our larger than average SEN stroller was no issue and we were very quickly settled and perusing the menu. Everyone interacted with the children and made as much effort to make sure they knew as much about the food and drink choices as us.

This might seem like an obvious thing but so many places I have been to the staff don't seem like they can be bothered to wait for the children to order and look to us to speak for them. Choosing and ordering their own food I believe is a great way to get children to try new things and grow their confidence in speaking out loud even when they might feel a bit nervous. No nerves at Spaghetti House. Even my daughter who is often reluctant to order her own food was very relaxed with such friendly staff. 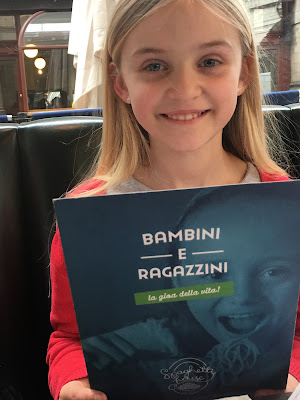 The children were offered both the main menu and the "Bambini e Ragazzini" (children and teenagers) menu but all three of them, aged 8, 10 and almost 12 decided on the Bambini menu (£6 for two courses, add gelato for an extra £2.50)  They enjoyed the activity pack they were offered too with puzzles and colouring fun. 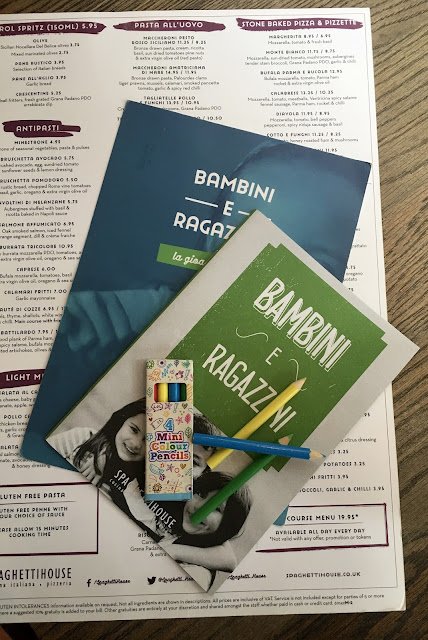 The Bambini menu offers lots of choice to suit different tastes. To start all of my children chose Crescentine which the menu described as "fried dough balls with Grand Padano and tomato dip."

This simply does not do these bad boys justice. I was glad the portions were so generous that my children felt able to let mum try one (or two) as they were light and tasty strips of heaven! 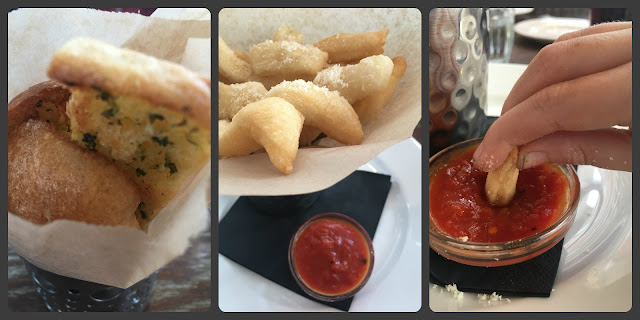 I'd also recommend the Pane All'Aglio. Crunchy yet juicy garlic bread which whets your appetite for the delights to follow. My husband went for the healthier option of Sicilian Norcellara Del Belice olives served on ice. 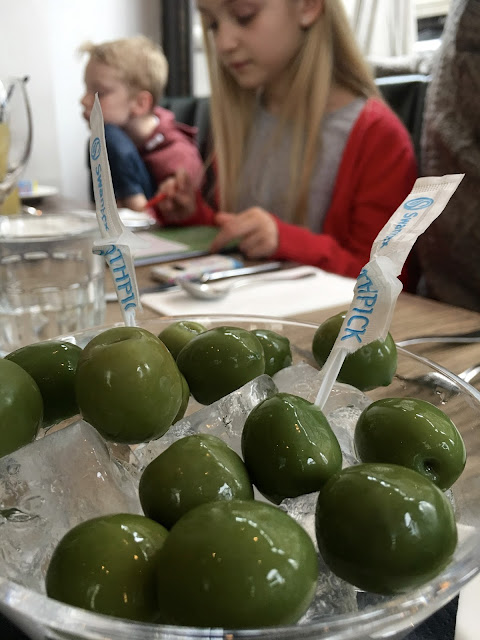 The next course was an easy choice for my boys who both went for pizza. My older boy asked if could have spinach added to his margherita pizza. Fresh spinach is included in one of the salads on the main menu so once again- no problem. 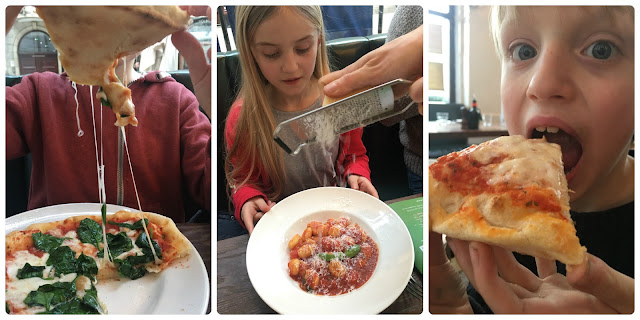 My daughter surprised us as if I had ordered for her I would have chosen the Spaghetti Bolognese which is one of her favourite dishes. Spaghetti House's version is made with slow cooked beef ragu with plum tomatoes and a hint of porcini mushrooms and herbs.

Instead she asked about potato gnocchi which she's never had before. We entered into a lovely light-hearted discussion with the store manager who did his best to describe the ingredient. She was convinced enough to try the gnocchi with a juicy tomato and basil sauce topped with freshly grated Parmesan cheese. She declared it "potato-ey!"

The fourth choice on the menu was breadcrumbed chicken strips with fried potatoes. I have no doubt they would have been gorgeous if the other dishes were anything to go by.

My husband chose exactly what I chose when I visited the Spaghetti House branch in Westfield, Shepherds Bush. Calamari followed by a King Prawn Linguine. He loved both! 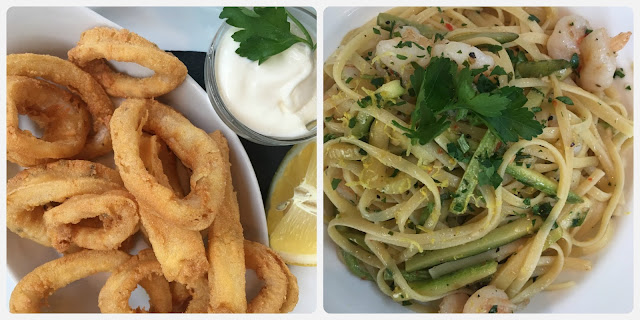 I decided to try the Salmone Affumicato - oak smoked salmon with iced fennel, orange segments and dill creme fraiche. Now I'd have said I didn't like fennel but this wafer thin sliced fennel added a delightful crunch and aroma to this generously sized antipasti. 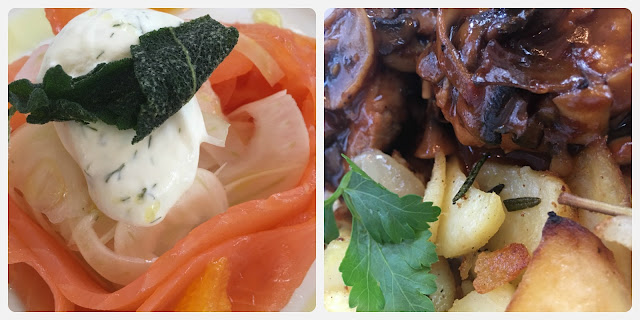 For my main course I decided to trust the manager who had already hit the mark with his recommendation of a lovely Sicilian white wine and opted for one of the specials of the day.

This was pork fillet with a rich mushroom sauce and fried potatoes - a luxurious and tasty dish which  I would order again in a heartbeat.

Savoury tummies filled we still all decided we could manage dessert. Everyone knows that's a separate stomach! 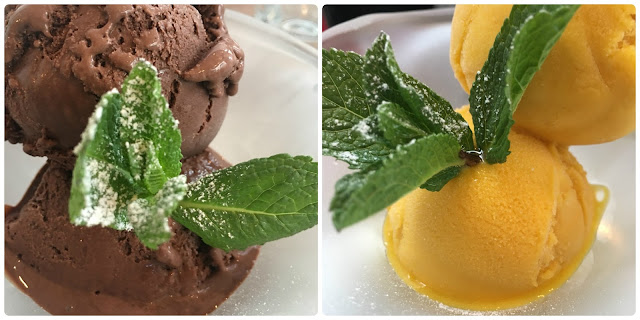 The boys chose gelato - chocolate and vanilla and my daughter continuing on her adventurous streak went for mango sorbet. All were flavoursome and generously portioned. 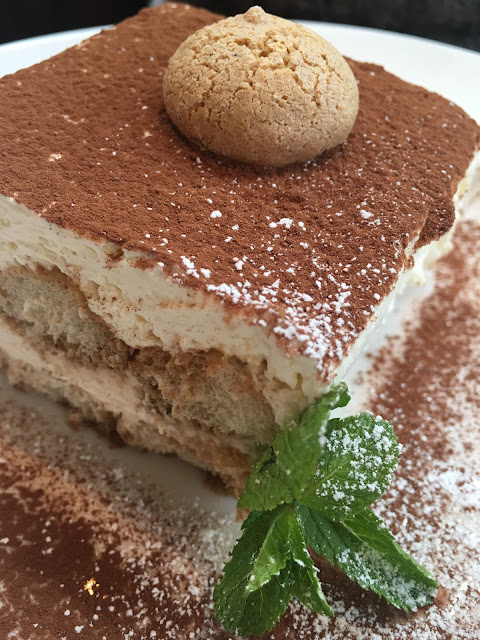 My husband didn't take much persuading to try the famous Spaghetti House homemade Tiramisu which I wanted to try but was torn as the menu also featured a homemade creme caramel which is my all time favourite dessert. It was as good as I'd hoped and the caramel on top was so glossy if you look closely you can see the beautiful buildings in Sicilian Avenue reflected in it! 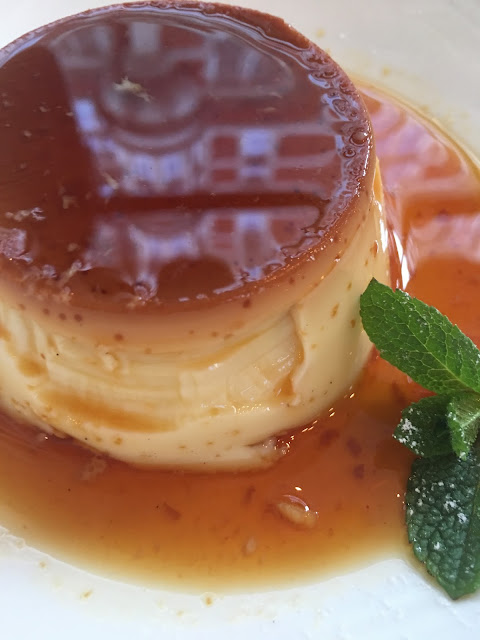 We left Spaghetti House feeling sated and happy. OK so cynics might think we were treated like royalty because they knew we were reviewing. But I have boasted before about my ability to tune into conversations around me and I heard every new customer being treated to the same friendly welcome and considerate service.

I'll repeat what I said in my last review of the family-owned group of restaurants - don't be put off by the name. Spaghetti House is much more than a bland chain restaurant. It's a tiny corner of Italy offering the fabulous cuisine and hospitality that glorious nation is renowned for. 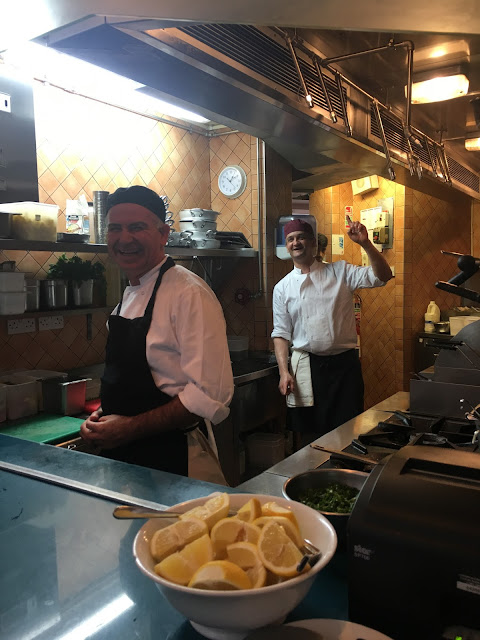 Disclaimer: We enjoyed lunch free at Spaghetti House for the purpose of this honest review.