on May 30, 2017
I have been hearing lots about the wave of trampoline parks opening across the country and I have to admit I wondered what the big deal was.

After all, we have a huge trampoline in the garden so why would I pay for my children to bounce indoors?

Then we were invited to visit the brand new Flip Out at Staples Corner Retail Park, Brent Cross and I will admit my jaw dropped as we walked through the doors - this is so much more than just a trampoline park. 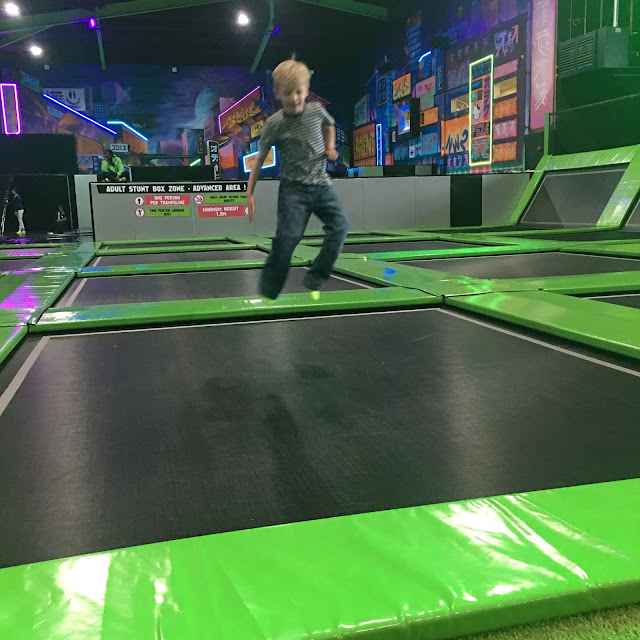 Levels of excitement were high amongst the children but staff made sure we had signed waivers, changed into safety socks and watched a simple but effective safety video before letting us loose in the huge hall (it used to be a cinema!)

I took one more safety precaution before starting the fun - I visited the toilets to avoid any embarrassing menopausal mum leakage! 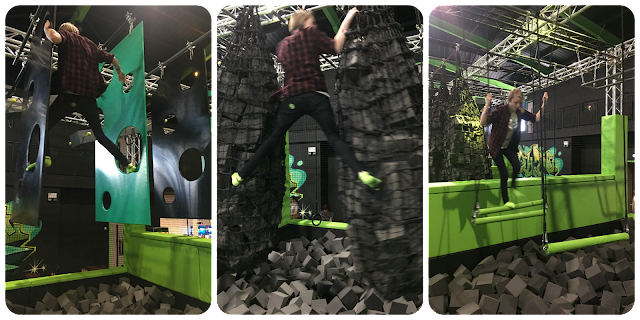 We popped our valuables and shoes into free lockers then headed to the main trampolining area to warm up.  After a few bounces I realised that although my pelvic floor was holding up, my thigh muscles were not so much - trampolining is fantastic for a workout! 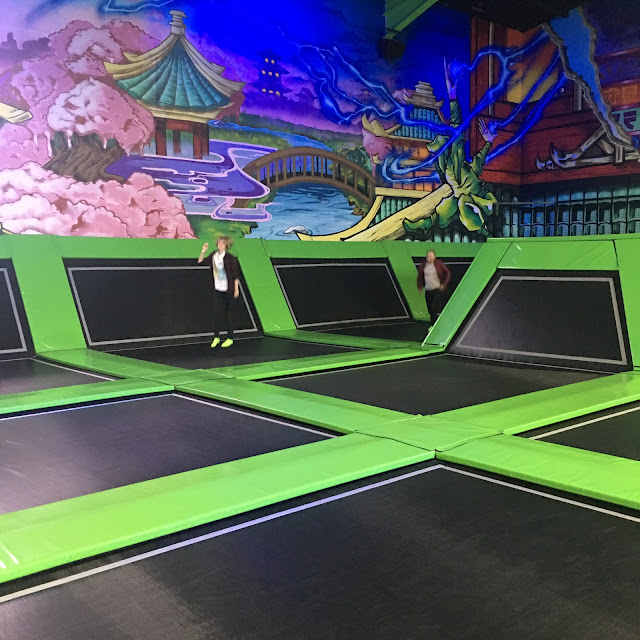 I was drawn to the trampolines with a giant foam pit attached. After watching the children bounce in, clamber out and repeat I simply could not resist a giant jump hurling myself into the lovely soft foam cubes.

I then realised that as I carry significantly more weight than my children AND have practically no upper body strength, getting out of the foam pit was going to be a lot more difficult than getting in.

I managed it, albeit with very little dignity much to the amusement of my laughing hyenas children. 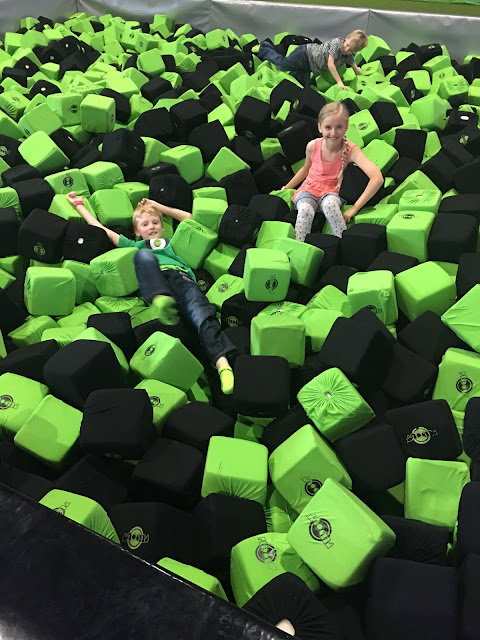 I retired to the cafe area while the children carried on exploring - I was pleased to see prices there were not horribly inflated and I spotted some rather delicious looking pizzas being devoured by some youngsters.

I'm not surprised they were practically inhaling their food.  After just a short time enjoying the bouncing fun I was knackered and starving and my activity tracker almost fainted with the shock of the calories I burned.

It was very gratifying watching the children get so much exercise while having so much fun. They loved all the trampolining of course but also enjoyed the Gladiator style battle beam, the challenging assault course and the exciting laser maze. 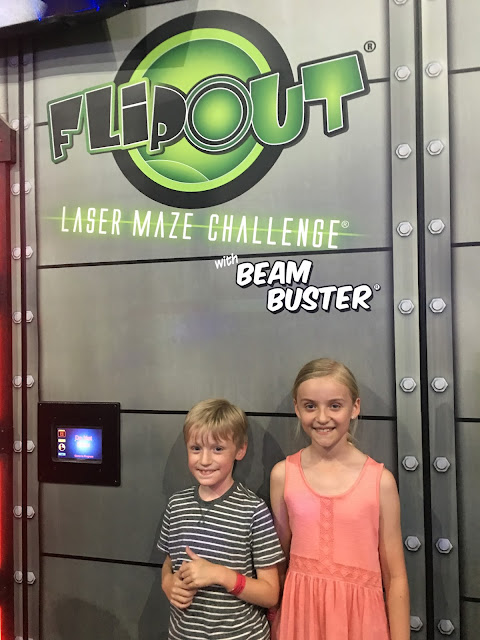 During our hour (you can book two hours if you like) we spotted some very excited children turning up for a birthday party.

I got a peek at two of the party rooms and was very impressed with the themed finish. Another two are in the process of being created so you will be able to choose from earth, wind, fire or water, and I would imagine Flip Out is going to be THE party destination for discerning North London kids. 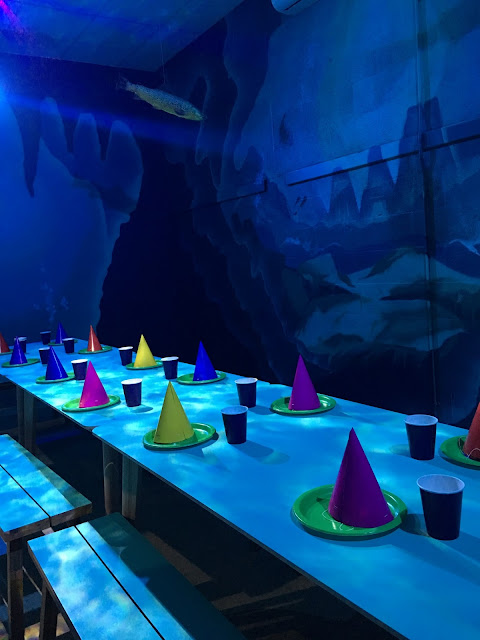 Also coming soon are special sessions for those with ASD (autism spectrum disorders) and other sensory processing issues when lights will be down and all music will be turned off.

There will also be Flip Fit classes (15+) After Dark sessions (13+) Little Ninja trampoline skills classes for 4-14 year olds and a nail bar!

Now.  Two of my children did sustain minor injuries while we were there. My 12 year old got a small friction burn from the ninja course and my youngest son (8) hurt his toe slightly leaving a trampoline.

Can I emphasise -neither was hurt any more than they might have been playing in the garden or even in their bedrooms and in fact the only reason I mention it is because I was so impressed by the way staff handled both events.

My older son was quite upset by his elbow burn and the member of staff who administered first aid was both confident and efficient and caring and reassuring.

While I was helping to complete an accident report form my daughter alerted me to the fact that my younger son had also hurt himself so I raced over from one wounded soldier to the other to find three concerned staff members trying to establish if my younger boy was badly hurt or very upset.

I informed them he has autism and they immediately physically moved back away from him then one staff member took the lead asking me how best to proceed with him. Between us we established he was actually fine - he had just been overwhelmed by their concerned attention.

We left feeling tired but happy and I would not hesitate to recommend Flip Out at Brent Cross to anyone from tiny tots to adults with a sense of fun. 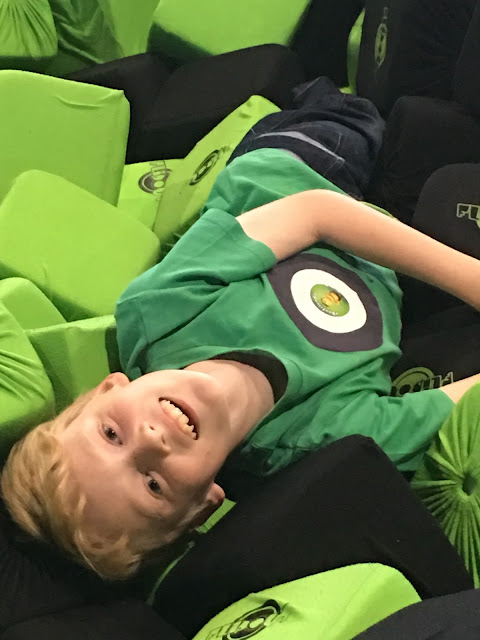 Disclaimer: We visited Flip Out at Brent Cross free for the purpose of this honest review.
activities for children birthday party Brent Cross days out with kids Flip Out kids activities London North London party venues pblogger trampoline park trampolining what to do in London with children