on May 22, 2017
I am a little bit (very) terrified of water and despite many, many, MANY swimming lessons still cautiously and slowly breaststroke up and down any pool and panic if water splashes my face, even in the shower.

When my eldest was a baby, as soon as his inoculations were complete I headed off to our local pool determined he would not inherit my fear. I enrolled in baby swim classes but on the very first session the woman running it snatched my precious first born out of my arms and fully submerged him. 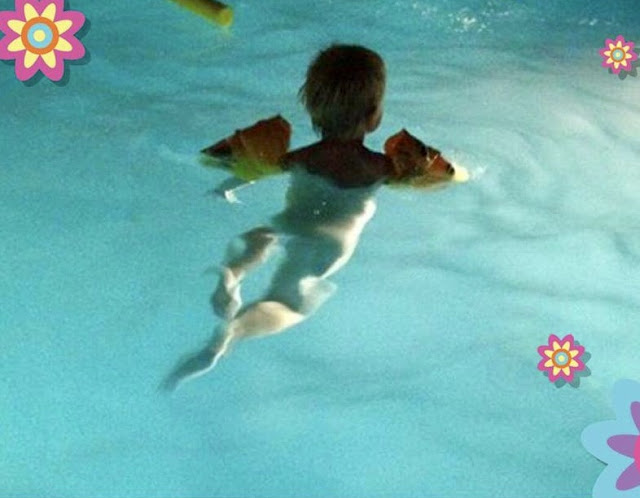 It felt to me like she held him under for ages - I'm sure of course it was only a few seconds - but as he emerged spluttering and screaming I vowed never to go back.

When he and his brother were older I signed them up for swimming lessons. Sounds simple? Oh no! This involved getting up at about 1am, queuing til dawn then handing over a vial of my blood, half our income for the year and the keys to my car in return for a coveted spot on Goldfish 1.

I may be exaggerating slightly but it was a bit of a nightmare with many parents missing out.

First lesson and I arrived at the leisure centre with two small children and a baby in a carry car seat. The changing rooms were downstairs and the lift was broken. I carried baby and herded children with bags downstairs and into what I think was an anteroom to hell. Well it was certainly almost as hot as hell down there with an all pervading moist smell of chlorine and bodies. Yuk.


Battling for a spot on a damp bench to sit to help my boys change then back up the stairs to the cafe (more expense) to wait and watch the lesson from above.

Week on week this nightmare continued and week on week I watched my boys WALK across the width of the pool, with the swim teacher seemingly oblivious. I pointed out to her that they weren't actually swimming and she assured me she would make sure she kept an eye on them.

After spending hundreds of pounds and almost killing myself with the effort of getting to the lessons I abandoned it as a bad job. The little so and so's learned to swim within about two weeks of primary school lessons with peer pressure at play.  The lessons were free and I didn't have to attend. Hurrah!

Here comes another unfit mother confession. *looks around and whispers*

I know, I know. Like I said. Unfit mother. However we had a good bash at teaching him during our last trip to Cypus (see picture with armbands above), last year at the pool at our Isle of Wight campsite and with a week in Cyprus coming up we plan to finish the job there.

He loathes arm bands (he has ASD and dislikes the feel of them on his arms and hates having them taken on and off) but while he is still not 100% swimming we have found a great alternative.

Aquaplane looks a bit like a shark fin, is light and my son says it's comfortable - so comfortable he has been known to wear it around the house. 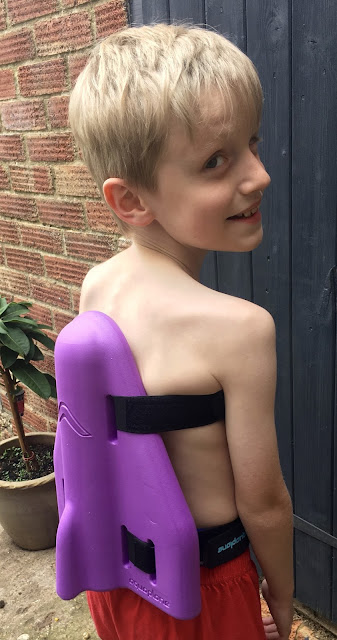 The swimming aid was invented by Chris Shore who said:"It’s all about feeling confident and safe. Aquaplane straps to a child’s back, leaving their arms free from resistance, enabling them to stretch out in the water, and achieve the correct body position naturally and easily."

Though Aquaplane is great for beginners it also adapts to take a child through all the different stages to further their swimming techniques. It's not just for doggy paddlers either. Aquaplane will help a child to learn to swim on their back, too.  The wide & low profile enables the learner to have more balance and the patented design gives a superior streamlined position compared to all other swimming aids.

It's an aid which continues to be useful after that first width or two has been conquered. Once your child is through the early stages of development, you can then remove the straps and AquaPlane can be used as a kick board to enhance stroke development. As further progress is achieved, AquaPlane turns into a performance tool to build stamina and strength.

Chris, who has coached many former championship swimmers adds: ‘Whilst Aquaplane might not guarantee a place in the Olympic swimming team, it will certainly give your child the confidence he or she needs to kick start the process this summer.’ 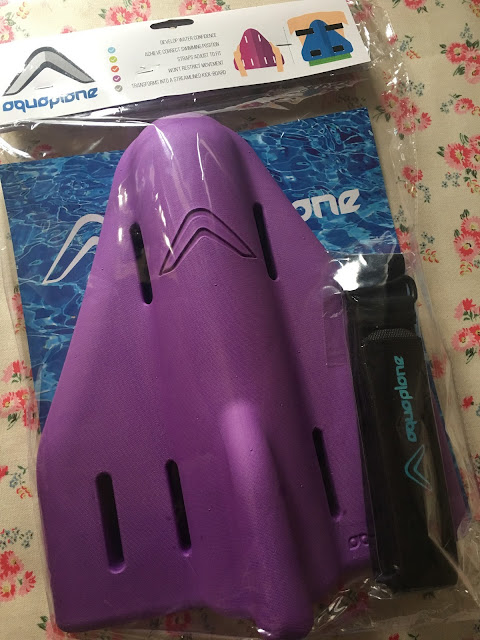 I feel very happy about using Aquaplane and my young almost-swimmer loves to wear it. We do have to put up with lots of shark film sounds effects of course but it beats the sound of whining as you blow up or try to rip off wet armbands.

Aquaplane is suitable for children aged from 3 upwards (check weight limits but it does fit my slim 8-year-old well)  and is available from www.hippychick.com  priced at £24.99.