Autism Day at school - and every day for us.

on June 23, 2017
Our primary school has been (mostly) brilliant since Grumpy got a diagnosis of ASD and yesterday in an ongoing scheme of educating the whole student body about the condition they invited some experts in to speak to the children, class by class, about autism.

Staff approached me beforehand to chat about how best to approach this with my son and what might be useful for the experts to focus on. I told them that we are very open with Grumpy about autism, he is very happy to talk about it and how it affects his life. I asked them to focus on making it clear that people with autism are not missing something, they are just different.

My children said the sessions went well. Grumpy self-identified himself as someone with autism and my daughter and her friends when asked if they knew anyone with autism were all happy to identify themselves as friends and family.

It appeared very few children in Grumpy's class had realised he had autism which shows the school are doing a great job of offering him support without it being very obvious.

He said lots of the children were more interested in him afterwards, and in fact he's delighted to be going off on a rare playdate tonight.  It's rare for him to be invited and it's even more rare for him to actually want to go! Hopefully it's a new dawn of understanding and acceptance and not just five minutes of dubious fame for him.

Knowing he's happy for his friends and their parents to know he has autism made it much easier to approach the parent offering an emergency packed tea as even if she offered exactly what I would have given him at home, he may well not eat it in a strange environment. I actually don't know what I would do without our vital supply of chocolate brioche!

I did not overload her with what ifs and maybes - I've found my boy can often surprise me, coping with stuff I wouldn't think he could cope with or conversely, melting down at things he's usually cool about. I just made sure she had my contact details!

I know of at least one child at our (mainstream)  school whose family do not want him to be publicly identified and seek no help from outside resources. I understand their decision but luckily for us we have always embraced quirkiness and so different in our house is usually applauded. My neurotypical children are not very typical either so Grumpy blends in nicely.

We thought long and hard about seeking diagnosis as Grumpy is bright and verbal and on the whole copes quite well. But since diagnosis things have improved vastly.

With school and home working together he is much more settled and has far fewer anxiety attacks and meltdowns. His bedtime routine is unrecognisable, for the better, and he copes with the unexpected much better.

We receive financial, emotional and practical help from a variety of outside agencies and even his siblings benefit from support from some amazing organisations like the National Autistic Society - we attend holiday-time fun days organised by the Milton Keynes branch which I believe have really helped Grumpy take ownership of his condition and strengthened the bond between him and his sister who goes along with him. 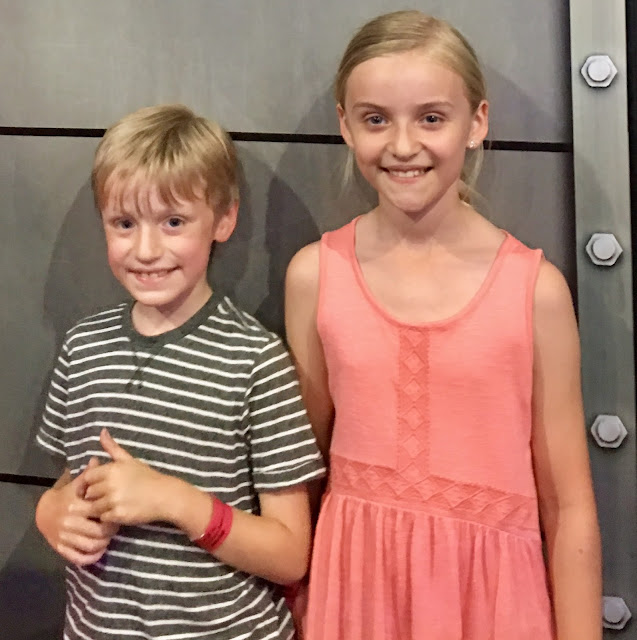 He was waiting for the assessor from the Family Fund to visit recently and asked before she arrived if  he "should let my autism out." That was the first proof we've had that he had been consciously masking and enabled a useful conversation about how it was OK for him to always let it out - he has nothing to be ashamed of and therefore nothing to hide.

Yesterday we went into London to do some filming with another child and his parent. When travelling and in busy places Grumpy chooses to wear an autism awareness badge which asks people to be patient with him. It has been particularly useful on the underground as he often gets anxious there and yesterday for instance someone spotted his badge and the fact he looked very worried and offered us a seat which enabled him to sit feeling much more secure on my lap.

Arriving at the reception at our destination I unpinned his badge to put it away. When the other mum realised he had autism she said she was surprised. She commented that he didn't look like he had autism. 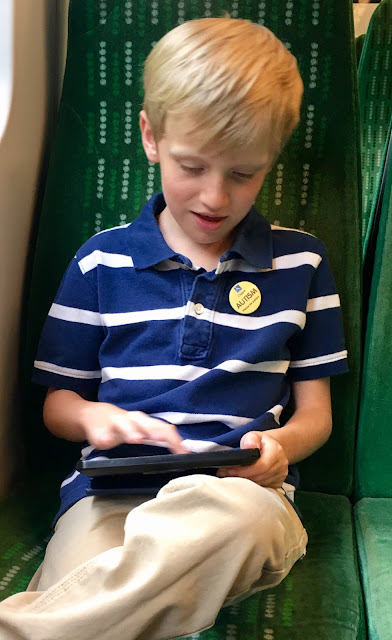 As the hours passed though he did some spinning, some collapsing onto the floor and started making some of his stim noises. When I distracted him with things from a bag of toys and puzzles I always carry when out with him, he perked up again and went back to appearing neurotypical. The other family seemed really interested in his personal version of autism.

When it came time to part ways was probably when Grumpy "let his autism out" most. He was absolutely distraught that having made a new friend he was having to leave him after just a few hours of fun, and he realised quickly he was unlikely to ever see that child again.

As the other boy waved and smiled, my son collapsed against me sobbing - the long journey home via three train changes was quite a trial as you could see the other commuters wondering what was upsetting my lad so much.

So yes, autism day is every day for us but having taken a difficult decision to go for diagnosis then be open with Grumpy about it all we feel like the future is looking a little brighter - we certainly don't feel so alone.

Having said that, since he will soon be heading into year 4 it won't be too long before we are dealing with getting the right support for him at secondary school level and I know from various blogs and social media posts that this can be a complete nightmare!