on June 19, 2017
I went to a barbecue last summer where my German friend served tasty bratwurst wrapped in bacon. I proclaimed there and then it was one of the nicest things I had ever eaten off a BBQ. 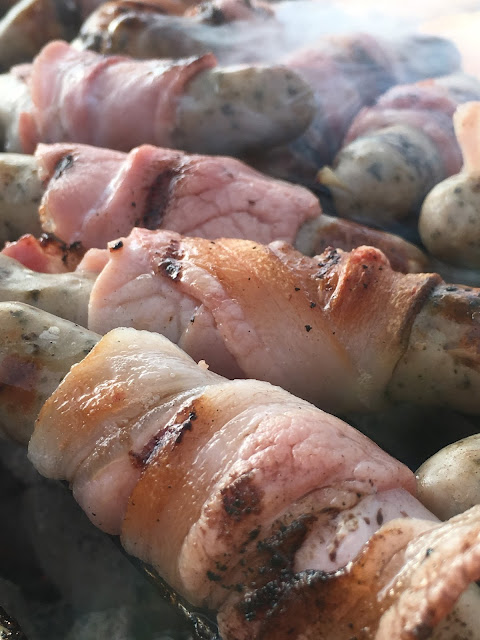 When I was in Cyprus earlier this year we tried to recreate the dish. I mean, it's just wrapping sausages in bacon. How hard can it be? But despite liberal use of cocktail sticks for some reason the bacon mostly just fell off so we ended up with deconstructed pigs in blankets.

I decided to have one last go and asked my Deutsch friend her secret. Now Shhh! Lean in. I want to whisper so not too many people hear her amazing tip...


She bloody buys them already wrapped!!!!

Yes, apparently in Germany, the equivalent of the UK's ready cooked jacket potato is the ready wrapped wurst.

Undeterred I invited her to my BBQ , availed myself of some bratwurst from her personal collection of German treats and set to wrapping them with smoked dry cured spoiltpig back bacon. 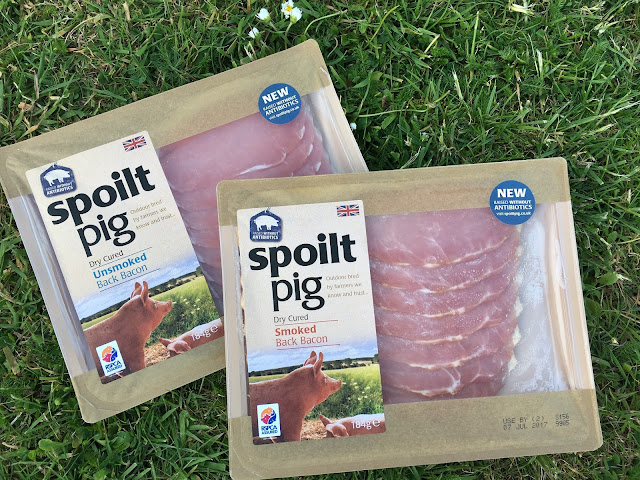 Now, let me tell you about this bacon for people who are seriously serious about their meat and bacon in particular.

Outdoor bred, RSPCA assured and 100% raised without antibiotics this bacon is mouthwateringly good and had a great texture which made it easy to wrap with no sliminess.

What's the big deal about being raised without antibiotics?


Jim Loescher, Managing Director of spoiltpig explains "The launch was born out of spoiltpig's concern regarding the global issue relating to antibiotic resistance and how farming impacts this. We believe in farming responsibly and always strive to do the right thing. That’s why we are launching the UK’s first Raised Without Antibiotics bacon and gammon range – easily identified by our blue Raised Without Antibiotics swing tag."

Aled Rhys Davies of Pruex, a Hygiene optimisation consultancy (experts in the reduction of antibiotics in farming), said:"The steps taken by spoiltpig are to be applauded as a lead response within the pig industry to the serious position we are in globally. "

He added:"As the WHO's (World Health Organisation) first global report on antimicrobial resistance which focuses on antibiotic resistance, put it – this is no longer a prediction, antibiotic resistance - when bacteria change and antibiotics fail -it is happening right now, across the world and without urgent action we are heading for a post antibiotic era in which common infections and minor injuries can once again kill’ 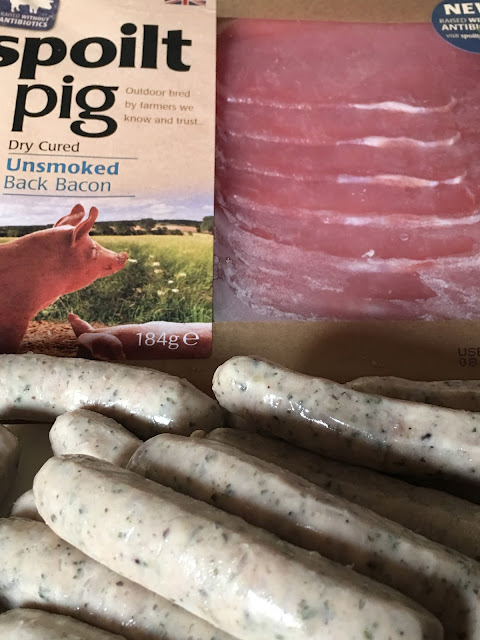 Rhys Davies continues to explain "The problem is attributed to the over use of antibiotics in humans as the main cause to human bacterial infections; however the overuse of antibiotics in farming is also contributing to the issue. Within farming we know it is the pig industry that represents one of the biggest user of antibiotics , this is due to persistent routine usage to limit the effect of illness."

I cut each rasher in half lengthways and wrapped the sausage, meatiest end first, finishing with the slightly fattier thinner end which I squished against the sausage slightly. 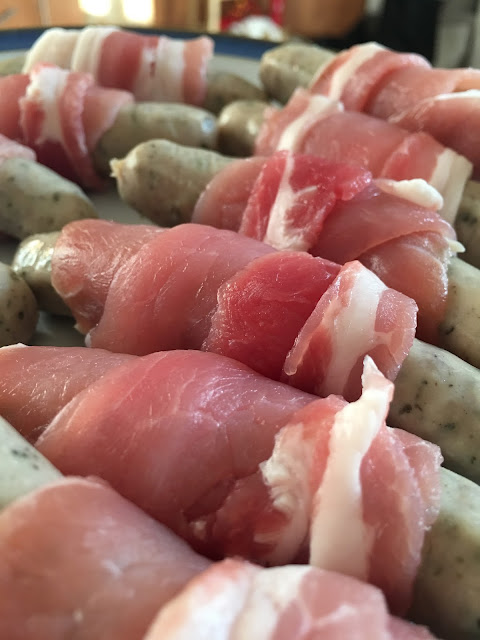 You could possibly refrigerate at this point to "set" the fat to the bacon but my mouth was already watering and my charcoal was white hot so I just placed them carefully onto the griddle.

The great thing about bratwurst type sausages is they don't drip grease like many British bangers so you don't end up with three foot flames and blackened offerings.

You do need to supervise carefully as they don't take long to cook - turn carefully but frequently to ensure even cooking.

You could take a tip from one of my friends who skewers 4-5 sausages onto thin metal or pre-soaked wooden skewers to prevent uneven cooking, rolling and sausage suicide through the gaps in the grill to the fiery hell beneath.

Food lovers you'll be glad to know I didn't lose a single sausage or any of their bacon jackets and they were served with lemony couscous, tomato pasta salad, buttered new potatoes and Prosecco. 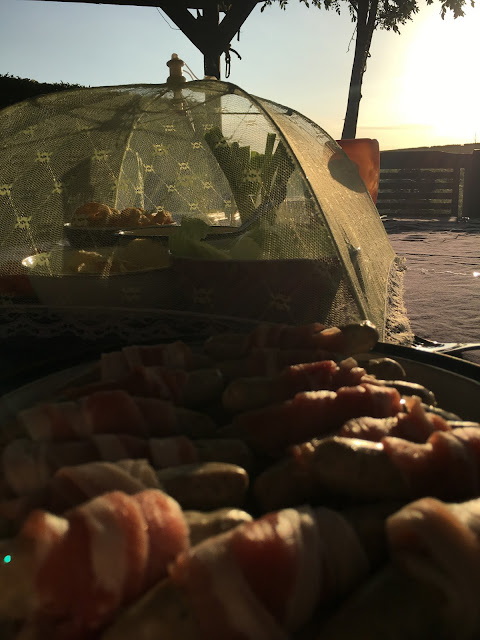 Disclaimer: I was sent two packs of Spoilt Pig back bacon free for the purpose of this honest review.