on June 19, 2017
This is probably a bit controversial & I may offend some people but, y'know. Whatever. My life, my blog.

We've just celebrated Father's Day here in the UK and we spent the day at the beach and unusually my husband got to see all of our children in one day.

Now they have started leaving the nest it can be tricky to all get together but I was proud to realise that they all wanted to let their dad know how much he was appreciated. There were gifts of wine, beer, chocolate, homemade treasures and hugs. 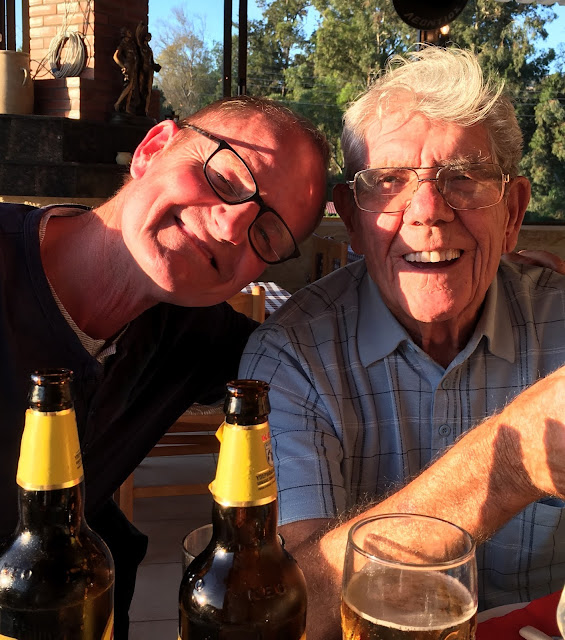 It was the same story in many households I am sure. I saw lots of lovely social media posts  and memes proclaiming love and gratitude for dads - some who are still here with their families and some who have passed away.

I did not post anything about my dad, for reasons I will explain.


(I did not post anything about my stepdad, pictured above with my husband during our recent trip to Cyprus, as he has children himself and I feel awkward muscling in on the day.)

My dad died years ago, at a fairly young age from an alcohol-related condition. I did not ever share any loving social media posts about him, or send Father's Day cards before the advent of social media greetings because actually he was a difficult man to be related to even after I had married and moved over 100 miles away.

He would not have won any parenting awards and nowadays would probably be classed as abusive, mostly because of his terrible temper which got worse with alcohol.

He was an alcoholic so that meant most of the time his immediate family bore the brunt while to everyone else he was a charming generous man. He didn't throw boiling pans of food at most people though or humiliate them on a daily basis so I can see why they would think he was an OK bloke.

At my children's school on Friday, the little ones stood up and declared: "I love my dad because...."

It got me thinking. For a start. Do/did I love my dad?  D'you know. I think not actually. I'm not sure I've ever admitted that to myself before.

I admired him as one admires someone you are not related to, someone you don't feel you have to hide from every day after school. Someone who doesn't make your friends leave hurriedly by the back door when they hear his car on the drive.

He was a charming man, sociable and quick witted and intelligent. He was a talented writer, award winning journalist, famous amongst his peers and admired and feared by local notables. He could make or break careers with his typewriter.

He made me feel stupid, talentless, useless, unattractive. He pointed out my physical flaws to visitors and when I was a teen, actually on my 16th birthday,  he told me I would NEVER be a journalist as I was not clever enough and had no flair for writing. He was controlling and scornful of those he professed to love.

Father's Day is about gratitude and after this little rant you might be surprised to learn that actually I am grateful to my father.

His disdain at my birthday meal when I excitedly shared my plans to follow in his footsteps spurred me on to prove him wrong.

I gained a place on a much sought after course on a journalism course, qualified, got promoted, won an award, was headhunted and a few years ago moved on to creating online content both here on my little blog and on websites all over the world.

I am grateful my mum was brave enough to remarry and I got to experience a more normal dad/daughter relationship. And to prove that nurture can sometimes trump nature, from my stepdad who came into my life when I was a teenager I have inherited a love of cars (especially fast ones) and gained the knowledge that you don't have to be related by blood to people to love them as much as if they were your "real" family.

To my two dads, for very different reasons- Thank You.