How to Customise Your Denim Jacket with Sequin Appliqué Angel Wings

on September 15, 2017
Now I'll confess upfront that this was not an original idea out of my own aged brain. I spotted customised denim jackets in London, fell in love with them, checked the price and ran away.

I'm not what you call a seamstress - I can sew on buttons and make simple repairs but I'm fundamentally lazy time poor and have been known to use that iron-on tape stuff to raise hems.

I was sure there had to be a fast and cheaper way of customising my own ancient denim jacket and sure enough a quick browse on eBay revealed iron on angel wings were on sale. You could opt for holograph, glitter or sequinned and there was a variety of colours to choose from

I chose this pair of silver sequin wings which cost just £2.35 with free postage! Sadly I can't link to that seller as the item has sold out and so the listing has been removed. 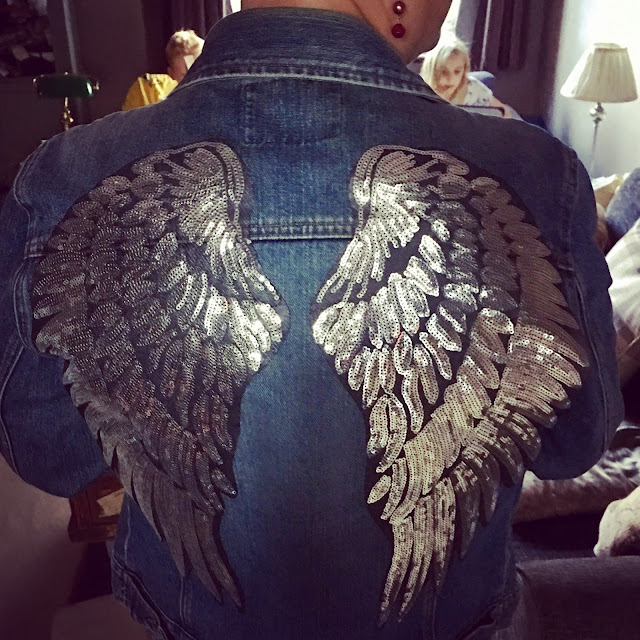 After ordering I was a little sceptical thinking the wings would probably be crap at that price but when they arrived I was blown away. I loved them!

The sequins on the wings I bought are glued on to a very flexible black mesh angel wing shape, rather than sewn so I am not sure how durable they will prove to be but for now they satisfy my need for sparkly wings. 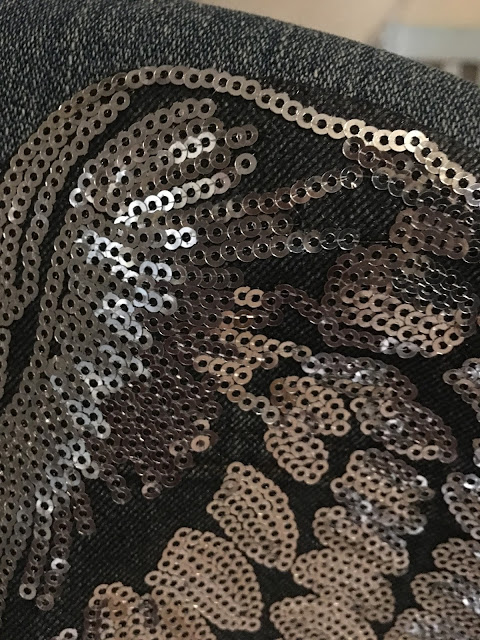 The instructions online were....interesting but I got the gist that the wings simply iron on.

Firstly I placed them on the back of my jacket using online images of similar projects as a guide to where they looked best. I counted feathers to make sure the wings were even on both sides - fifth feather down on outside edge to rest on the seam kind of thing.

As an iron-on veteran once the first wing was placed I took the precaution of covering it with a tea towel then ironing over that. A hot iron over sequins will almost certainly result in sequin mush.

Be very careful not to let the wing move when placing the tea towel over it.

I started by moving the iron (set to hot without steam) very slowly along the edge of the wing then pressed all over, leaving the iron in each position for about 15 seconds.

I allowed the wing to cool and set for about a minute before moving the jacket to place the second wing. I then repeated the ironing. I was concerned about whether the mesh would adhere over the seams on my jacket but they seem fine.

You could put a few stitches in to make sure the wing is secure but I hate sewing denim so plan to take my chances and re-iron if necessary.

My daughter likes the idea of adding wings to a T-shirt. I am not sure how washable these would prove to be (and am not too worried as I don't wash my denim jacket very often) but at the bargain price they would be great to customise clothing for parties or festivals.

I think if you reheated them you could peel them off clothing afterwards (depending on the fabric)  but I've not tried so don't hold me to that!

I am delighted with the result, think it looks very professional, and for a couple of quid it was a fun way to customise my jacket. 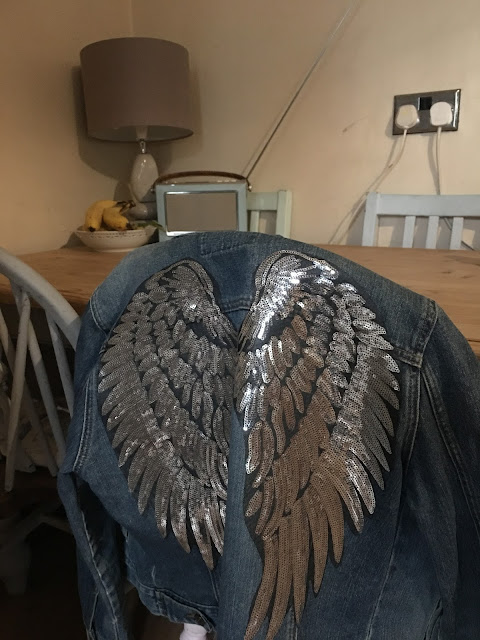