on June 18, 2018
If you are a Harry Potter fan, the Warner Bros Studio Tour is an absolute must. If you are less of a fan it doesn't matter if you don't know a Basilisk from a Boggart, it still offers a fascinating insight into the world of movie making making the attraction pretty much the perfect family day out. 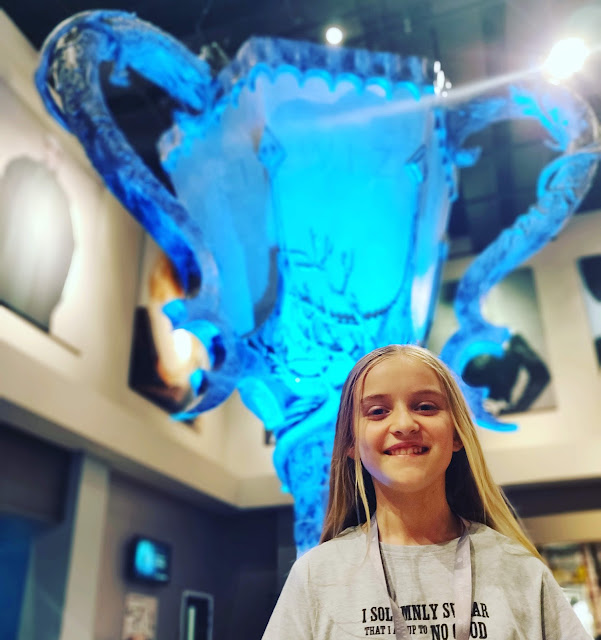 The attraction in Hertfordshire, England is one of those places you can revisit time and time again as exciting new exhibits are added on a regular basis.

During our most recent visit we saw a whole load of new costumes and props from Harry Potter and the Goblet of Fire - the fourth in the series of fantasy movies featuring everyone's favourite wizards and witches.


My son felt honoured to be invited to help open the doors to The Great Hall and even though we've been before I still felt really thrilled to be walking through them into the familiar room. 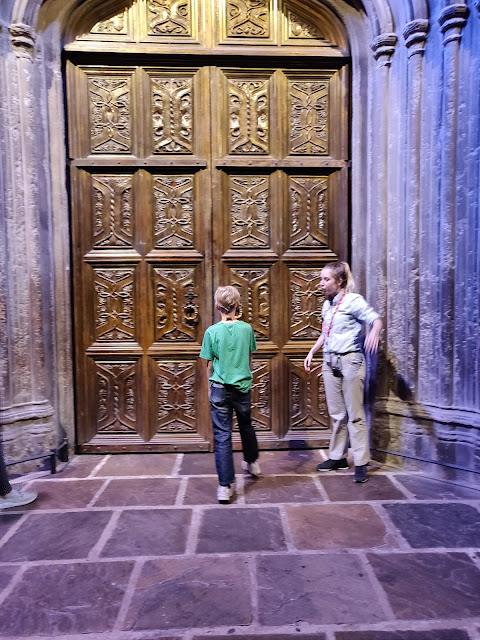 It's so exciting getting a behind the scenes peek at how the filmmakers bring the characters and stories to life. We even had a live special effects demonstration in The Great Hall of how the Goblet of Fire expels the Triwizard Tournament Champions' parchments AND got a souvenir parchment to take home. 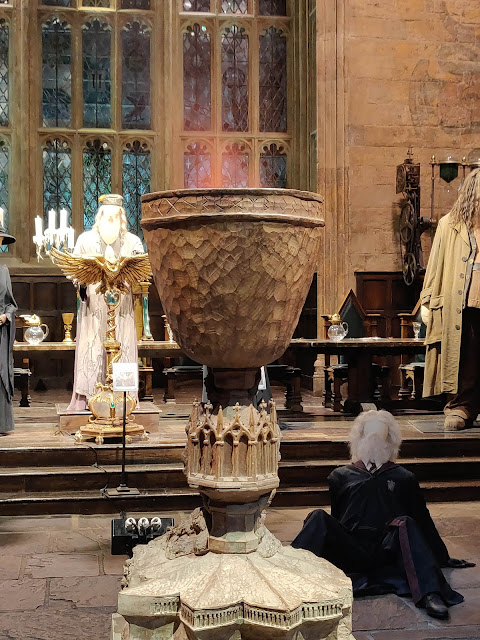 It's the first time the Goblet has been back in The Great Hall since filming on the movie wrapped. Well - actually there were two Goblets, one "original" and one made from a cast of the original for special effects scenes. We also saw the Triwizard cup! 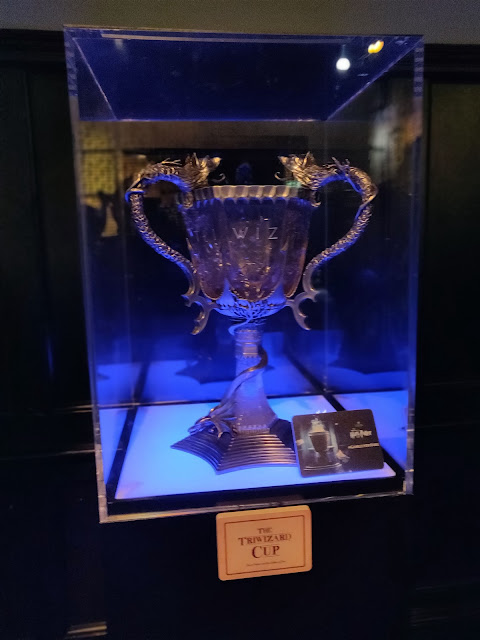 The display featuring the magical taps from the prefect's dining room is quite a spectacle. I did a bit of research and learned that experts had to adapt the exhibit to ensure it could run water constantly for Tour visitors rather than just a few hours during filming. The taps are made from real bronze for durability. Further on in the tour you can learn more about the design process of these and other props. 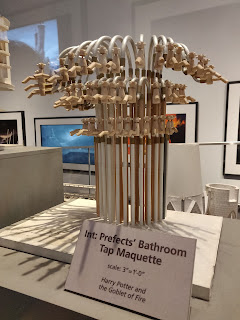 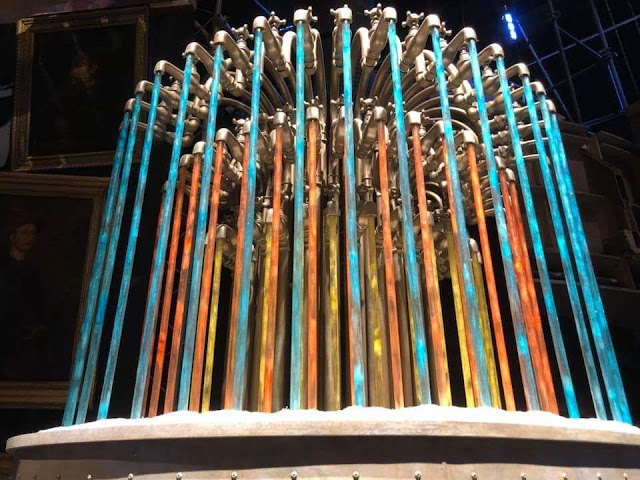 Fans can also discover behind-the-scenes secrets of He-Who-Must-Not-Be-Named in a display demonstrating how Voldemort’s seemingly simple costume was adapted to show both his strength and vulnerability throughout the films. In addition, many new props and costumes from the Triwizard Tournament are on display including the boot Portkey that transported Harry, Hermione and the Weasley family to the 422nd Quidditch World Cup.

We were very excited to see Tom Riddle’s grave. It's positioned to allow a 360 degree view of the sculpture so you can walk round and take pictures from all angles. The sculpture was created before the details of Voldemort’s lineage were known meaning the dates had to be changed in post-production. Staff tipped us off to look for an error on the grave - I'm not going to give it away but my daughter spotted it before I did! 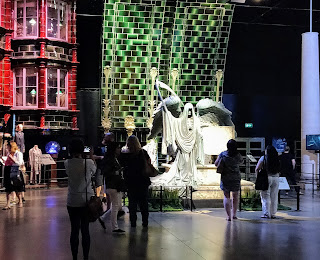 My eagle-eyed niece spotted a new addition to the majestic Hogwarts castle model; a scale version of the Beauxbatons carriage complete with winged horses poised to land on the Hogwarts grounds for the first time ahead of the Triwizard championship. She's hoping they add the Durmstrang ship soon too.

We also enjoyed a walk through the enchanted forest- well, I say enjoyed. I'm a little bit totally terrified of spiders so being surrounded by Aragog and his friends and family was hair raising!

It was exciting being able to bow to Buckbeak and receive a bow back in return and we took some time to "ride" the Hogwart's Express too. 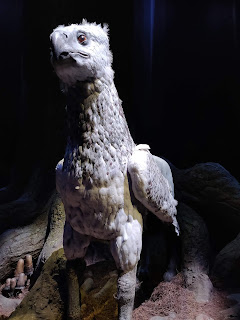 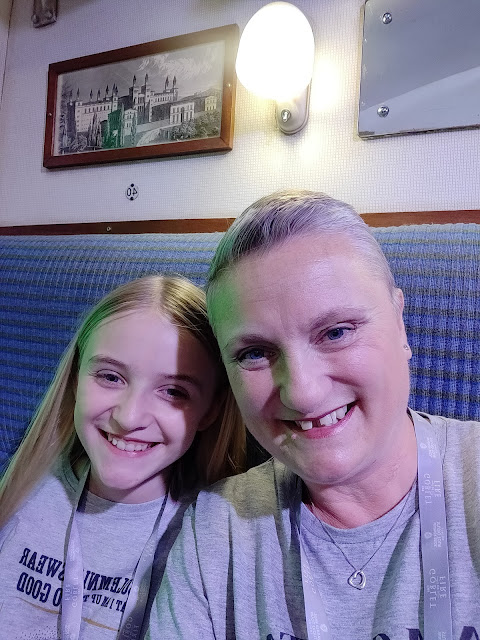 For the first time we ate in the Backlot Cafe and I have to say I was rather impressed. My daughters both chose a tasty pasta dish with tomato and basil sauce which came with a slice of garlic bread. My son had chicken curry with rice and a naan bread and I enjoyed a chicken burger washed down with a glass or two of (non alcoholic) Butterbeer while admiring the view of Privet Drive, The Knight Bus and the Hogwarts Bridge just outside the cafe doors. 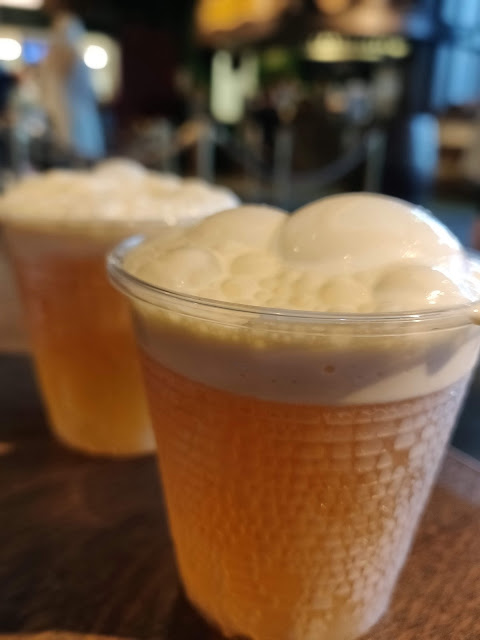 You can also buy sandwiches and snacks, afternoon tea, jacket potatoes, soup and themed lunch boxes for children. Butter beer ice-cream is available alongside the famous drink and you can pay a little extra for souvenir mugs and dishes to eat from and take home if you wish. Coffee fans will be glad to learn that there's a Starbucks in the lobby too.

Almost as exciting as the tour is the selection of gift shops dotted throughout the attraction with an extra large shop at the end of the tour. My eldest daughter was beside herself with excitement and treated herself to a new wand and a Slytherin hoodie. I was very impressed with the quality of the offerings and had to restrain myself against the urge to buy a Hufflepuff hoodie. Maybe next time.

There were lots of expensive collectors items to buy including full Hogwarts uniforms complete with robes but parents will be glad to know there were plenty of pocket money priced gifts to pick up.

My two younger children spent £5 each on posters so now we have a Marauder's Map on one bedroom door and a Ravenclaw poster ready to put up just as soon as I've redecorated her bedroom, probably in Ravenclaw colours!

We had a fantastic evening at Warner Bros Studio Tours and I think we will be talking about it for years to come. I've yet to see the Hogwarts Castle covered in snow while daughter has heard Halloween is special too so I think more visits are in the pipeline.

Luckily the attraction is just down the road for us although it is  easy to reach by road and rail from pretty much anywhere.

Warner Bros Studio Tour is just 20 miles north west of London and less than 3 miles from both the M1 and M25 and special shuttle buses run from nearby Watford Junction railway station to the Studios costing £2.50 (cash only) for a return ticket. Like the Knight Bus it doesn't go underwater! 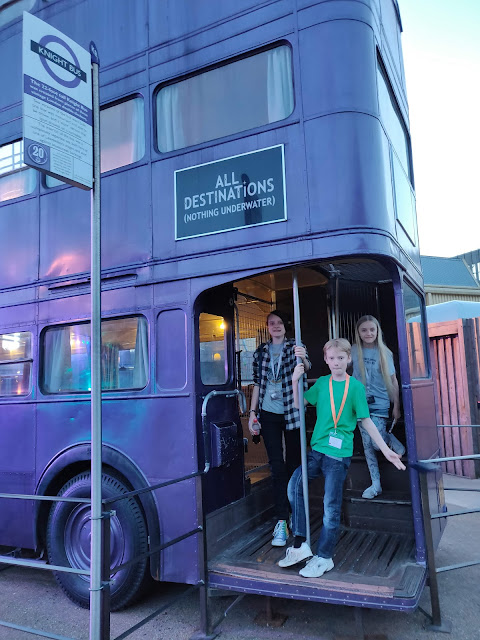 
The Goblet of Fire Exhibition will run until  Sunday 23rd September 2018. Tickets must be pre-booked and all extra features are included in the ticket price.