What To Eat & Drink At A German Christmas Market

on December 05, 2019
I love going to Christmas markets in Germany and have been to some as small as 15 stalls in a village hall up to giant sprawling markets which take over city centres. I love the atmosphere but most of all I love the range of delicious food and drinks on offer. 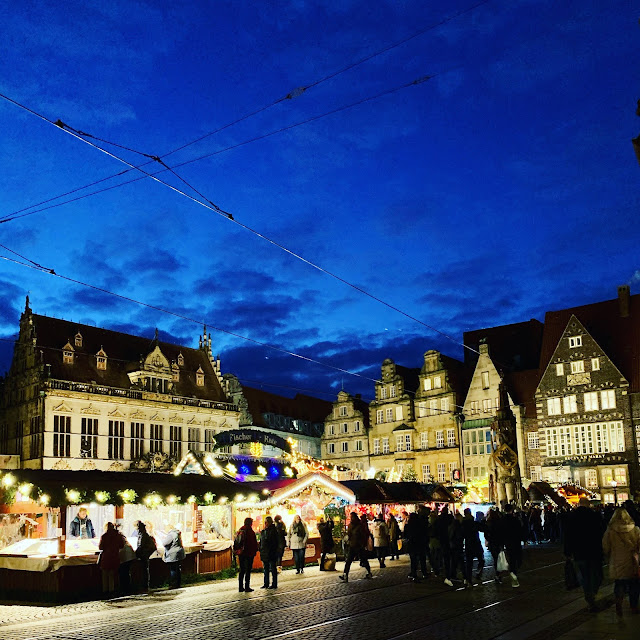 The mouthwatering aroma of sweet and savoury treats is one of the first things to strike you as you enter a Weinachtsmarkt and the most difficult decision for me is what to eat first.

At the UK Christmas markets you may see many stalls offering burgers and chips but in Germany there are more traditional choices. In Bremen recently I did not see a single burger van.

You'd need a huge appetite or a couple of days to try everything a good Christmas market has to offer. If you have a limited budget and/or appetite you could do worse than sample the famous German wurst.

These dense meaty sausages are a world away from what many Brits call sausages and there are many variants ranging from my favourite slim and meaty Thuringer bratwurst to the immensely popular currywurst.

Expect more sausage than bread and feel free to smother it in mustard and ketchup from one of the udder-like dispensers you see hanging on many stalls. You may have the option of sauerkraut or onions too.

Lean against the high tables which are usually dotted around the food stalls and don't be afraid to join a table were people are already eating.

In Bremen we saw stalls selling steak served in buns and as only fitting for this ancient city with its strong maritime heritage there was lots of fishy treats on sale too.

Years ago I was at Braunshweig Wienachtsmarkt when my friend Claudia introduced me to buttery sugary wonderfulness, hot mini pancakes known as poffertjes. 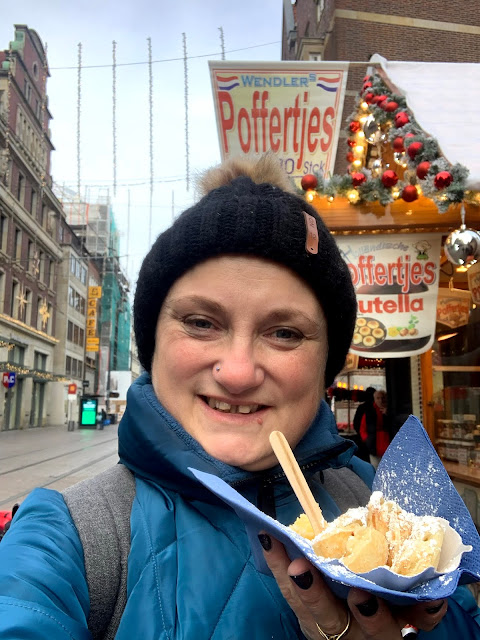 Strictly speaking they are a Dutch delicacy but I've never been to a German Christmas market where they are not being sold. You can even get them in the mini Christmas market currently set up in Leicester Square in London.

In Bremen stalls offered them with a choice of topping. I stuck with butter and icing sugar but my son opted for Nutella which was drizzled generously over the piping hot pancakes which were cooked fresh to order on special hotplates. 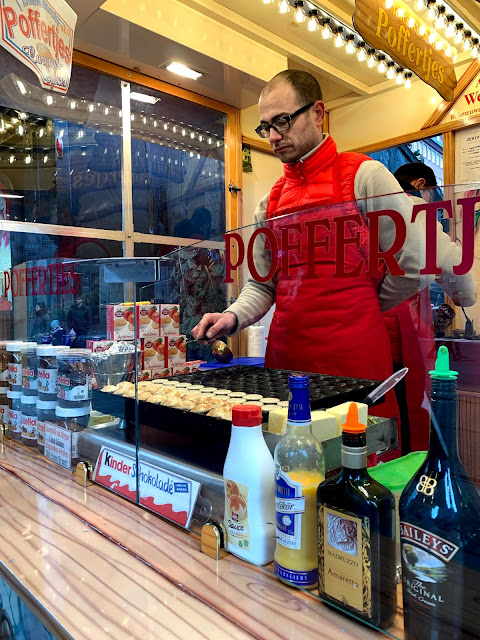 Back to savoury choices, one of my favourites is kartoffelpuffer, shallow fried potato cakes which are usually served with a good dollop of apple sauce. If you want a fast filling meal this is the one for you or share a portion if you want to leave room for other treats.

In some areas of Germany they might be called reibekuchen and you might have a choice of side or toppings ranging from garlic sauce to icing sugar. I don't think you can beat apple sauce though.

Other foodie delicacies you might spot include a kind of potato crisp wrapped round a stick, crepes, iced gingerbread hearts, topped doughy pretzels, sugary almonds and other nuts -get them freshly cooked and still hot for the best taste experience. 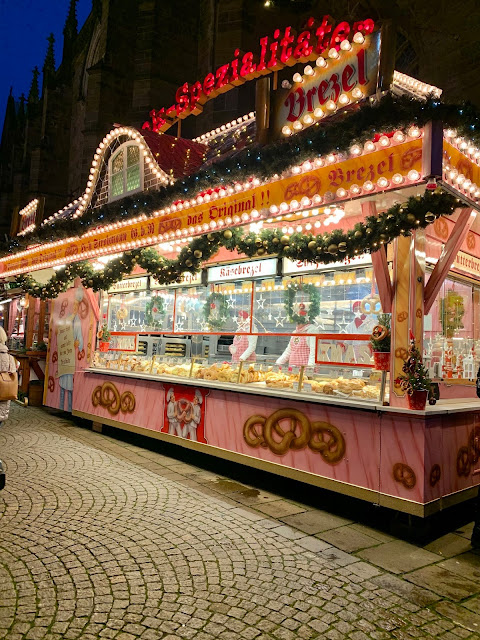 Walking round a Christmas market in daylight is a lovely experience but at night the lights are beyond pretty and the atmosphere changes. Families still enjoy rides and the stalls but as darkness falls friends and workmates gather at the pop-up bars to raise a glass or mug (or six) to good cheer.

Most people have tried gluhwein, mulled wine made with red wine, but have you ever tried the white wine version? You might see it advertised as weise gluhwein. Recipes vary from stall to stall - some may have rum or brandy added along with the traditional spices.

Something really special is feuerzangenbowle, a German flaming punch, which is both spectacular to watch being prepared and gorgeous to drink.

Many German homes have small feuerzangenbowle sets at home but at the markets you'll see this alcoholic treat being prepared in giant copper bowls with a smaller container suspended above dripping liquid from a flaming lump of rum-soaked sugar into the warmed and spiced red wine below.

Some of these temporary bars are very elaborate and you can hardly believe they are pop-ups. Expect moving woodland creatures decorating the roof, log burners, blankets, booths and bar stools.

At Bremen's Weser pirate-themed waterfront market this year alongside some fabulous craft stalls there are entire pirate ship bars and one fabulous wurst stall shaped like a boat with the costumed cooks occasionally breaking into sea shanties. Brilliant! 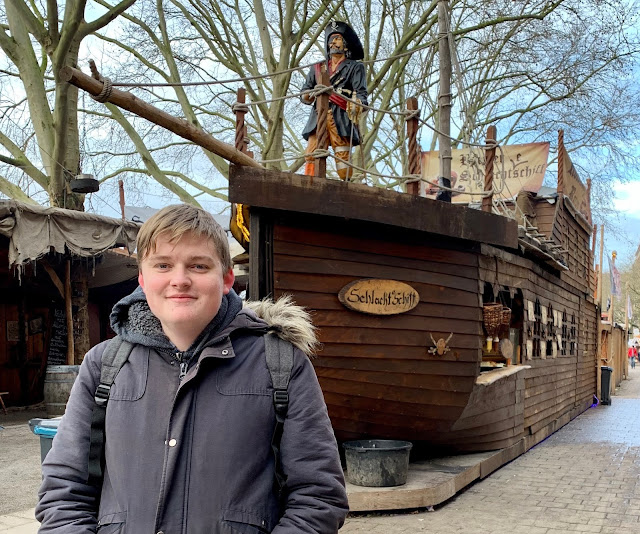 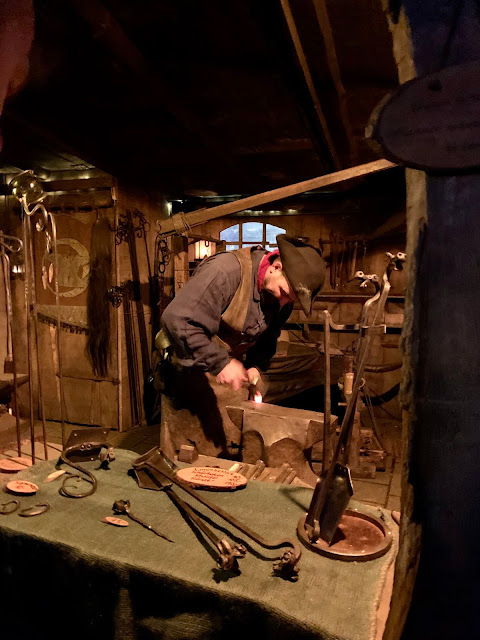 You may also see hot chocolate with alcohol added and in Bremen I enjoyed a glass of "Grandma's egg punch" which was an extremely potent whipped-cream topped hot egg nog-style drink. It certainly warmed me up! 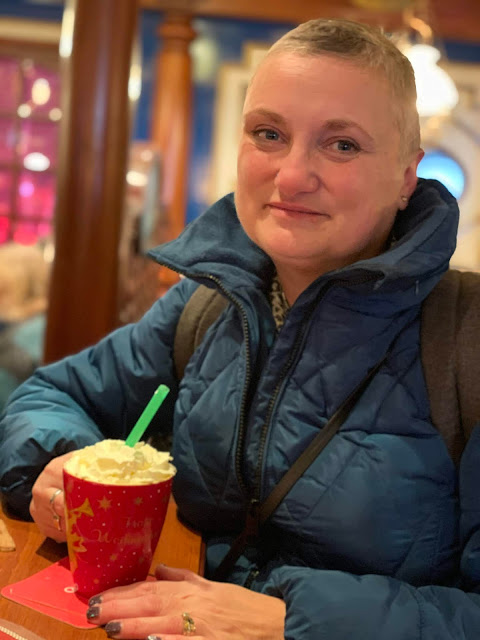 You may be able to pay a little extra to keep the mug or glass your drink is served in which can make a nice souvenir.

My top tips for getting the most from a German Christmas market are to wrap up warm, don't eat before you go, take cash as many stalls don't take cards and leave the car at home. 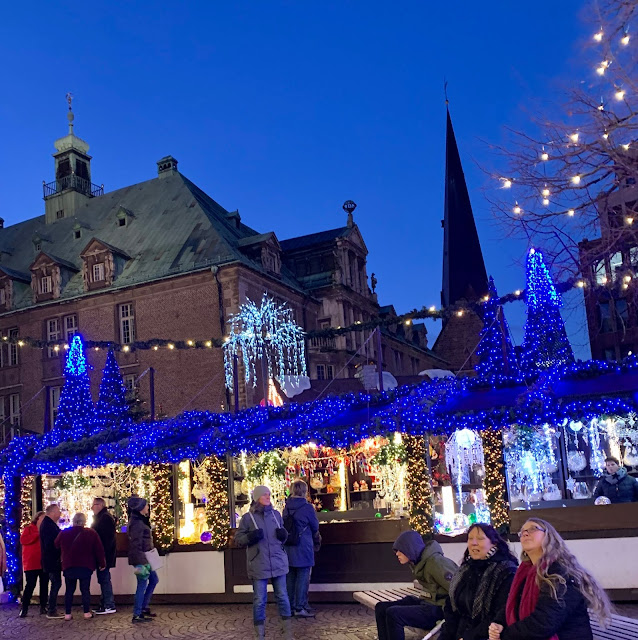