Airports are rapidly almost becoming destinations in their own right with shopping and food options which are starting to feel more high end with champagne bars and well known designer brands jostling with the meal deal and fast food options we are used to. But can you believe that in Munich certainly you can enjoy food at the fine dining  "Mountain Hub Gourmet" restaurant in the Hilton Munich Airport which has just been awarded a coveted Michelin star. 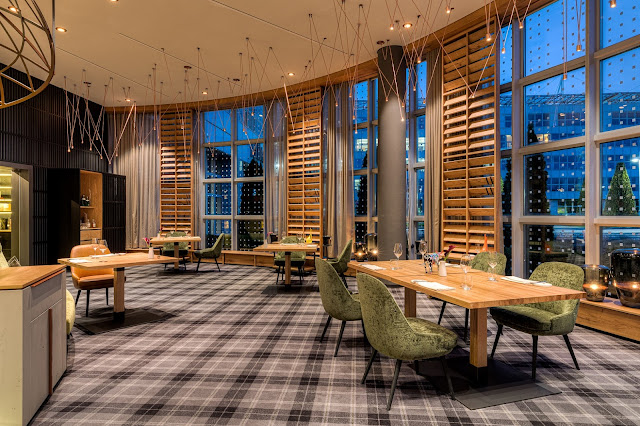 The Michelin star has now been handed over to Chef Stefan Barnhusen (photo: center) and his crew who serve what is described as the :"pure essence of Alpine cuisine","Unadulterated and authentic but always with a very special touch" and my favourite, "exuberant like a mountain stream."

Diners are invited on a culinary hike - I've taken a peek at the Mountain Hub Gourmet menu featuring delights such as salmon with wood garlic, pea and razor clam and pigeon with macadamia, savoury and curry and I think it might actually be worth booking a flight to Munich purely for this mouthwatering meal.

This is the sixth star, so to speak, for Munich's "Five-Star Airport," which has already won awards for its quality of stay and service.

Munich Airport CCO Andersson: "With this award, our airport is the only airport in Europe to offer such culinary high flights to the stars." Dominik Speck, representing the Guide Michelin, acknowledged the great ambience of the Mountain Hub Gourmet and praised the entire team around Chef Barnhusen for their creativity.