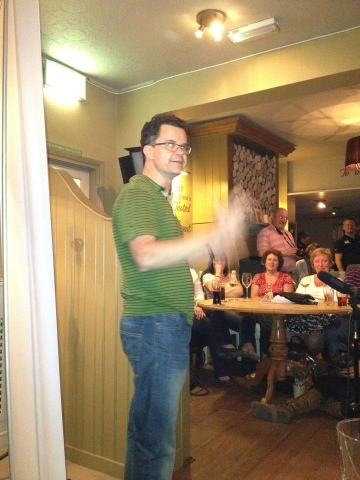 I like to be the centre of attention. I think that's partly why I enjoyed my pregnancies so much. Particularly with your first baby even strangers in shops fuss over you and make you feel like a princess.

I liked seeing my name-byline-prints in the newspapers I worked for and once I'd got over the worst of my stage fright, I even enjoyed standing up and preaching at churches in my team parish.

I wasn't always like this. I was a really shy child, a little bit odd and I never really seemed to fit in with my peers.
I still don't but I'm over it and relish my status as that mad mum of 7. I would love to hear someone describe me as genuinely eccentric.

The thing I love most is making people laugh. It's a skill learned by a lot of odd children. Make the bullies laugh and they leave you alone. I'm a terrible joke teller -I can never remember the punchline- but I can spin a tale with a humorous slant. I'm a bit of a clown but I'm not a comedian.

Last year I had the pleasure of seeing a real comedian in full flow. Dominic Holland did a very short set at a roving comedy night where professional comedians performed in a variety of pubs alongside amateurs who had done a comedy course. ( see pic -not sure why his hands are so blurry!)

I enjoyed his short gig so much I "followed" him on Twitter. To my surprise he "followed" me back stating anyone with 7 kids deserved a follow! He came back to Tring later in the year to do a one man gig so I went along with DH and two friends. Oddly no one seemed keen to sit near the front (turns out it's not the best spot if you are going to see a stand-up comedian and want to stay anonymous!) so we took our seats just a few feet from the stage.

Dominic based his act round his realisation that his fame was being rapidly eclipsed by that of his teenage son, Tom. Tom Holland was Billy Elliot on the West End stage and currently can be seen at a cinema near you playing Lucas in The Impossible, a film about a family who survived the 2004 Boxing Day tsunami against the odds.

So Dominic talked a lot, obviously, about his family. He mentioned with some pride that he had four boys. And I heard myself in heckling mode, mutter loudly; " amateur!" This from the woman who as a child was too embarrassed to join in with "he's behind you!" at the Christmas panto!

This led to a stage to stalls discussion about my family size and then he recognised me as " that mad woman with 7 kids from twitter!" There followed some good hearted banter between myself and the award-winning comedian which led to the audience laughing along. Buoyed by their obvious appreciation of my amateur wisecracks I happily back-chatted back. Meanwhile my friends and DH did their best to slither down their seats and absorb themselves into the velour. Did I mention this was all being filmed for a DVD?

All credit to Dominic Holland- he could have slaughtered me but he let me have my moment in the spotlight and I gather has even left "my bit" in the DVD. He now has a lifelong and loyal fan. (friend? stalker?)

And it is for this kindness that I was keen to read his ebook, Eclipsed. (available to download from Amazon) I'm glad I did. I won't say much more- this, believe it or not, is not in any way a sponsored post. I was just very pleasantly surprised by how ordinary the Holland family seem. In the world we live in where many celebrities pamper their children in gilded lifestyles far removed from the real world it was lovely to read how the Hollands reacted to the extraordinary events happening to their son. Dominic writes with love, pride and a humbleness unexpected in one with his previous "show biz " experience.

So Tom's doing well. Dominic's career will hopefully get a bit of a boost with his book and DVD. What about me? Well I think the days of first class flights and famous faces may be some way off yet but as long as you folks are happy to read my ramblings I will continue to attempt to be mildly entertaining- and who knows, one day I might even manage funny.

This is an old post I have revived for #MagicMoments. UPDATE; Dominic now has a new e-book out "A Man's Life".  He has asked me to review it and offered a guest post for my blog to say thank you. So look out for Dom on madmumof7.com soon....