on August 17, 2013
SO it's STILL the school holidays and it's getting harder to entertain the children. Apparently a saucepan full of homemade popcorn and a DVD or the paddling pool with a selection of empty squash bottles are no longer enough to keep them occupied for hours.

Luckily we have a friend who has a holiday cottage in the Cotswolds so this weekend we packed the Galaxy to bursting point with clothes and shoes suitable for either Saharan heat or rainforest-esque deluges - we've had both here today - and what seems like most of Aldi's food stock and set off northwards.

I love the cottage. There are beds enough for all of us. Well. All of us who had travelled up. DS#1 had work commitments and DS#2 informed me that he was sure the Cotswolds was lovely if you were very young or very old but held very little attraction for a nearly 18-year-old. I think the B (oring) word may have been mentioned. So we left him at home in our less-than bustling village. But at least he has Netflix and friends just a bus-ride away.

The cottage has two bathrooms- and more to the point two toilets which is vital for a large family. It's not a tent. It's detached so to a certain extent I can screech at the kids and I'm not disturbing anyone. Except myself - I find the ease I fall into fishwife mode quite disturbing.

We have been before and explored some of the local area and had decided to finally allow the children to fulfill their ambition to have a go at the Dragonfly Maze at Bourton-on-the-Water.

My children have an odd obsession with Mazes. I can take them or leave them. A friend of mine is positively phobic about them. But my children became highly excited at the thought of following narrow paths through maize or hedges to find whatever there is to find in the middle.

So off we went to Bourton. We parked and started walking towards the maze. I looked longingly back at the Edinburgh Woollen Mill shop worrying my husband. He says I am rapidly turning into an old lady!

At the maze the lady in charge went to endless trouble making sure we had the best ticket deal and explaining the quiz to my now bouncing children. She even laboriously copied out the Roman numerals they would need to decipher in the maze quiz despite DS#4's confident assurances that he could count up to 100 in Roman numerals. (I'll test him later)
And as we sent them into the maze, parking ourselves on a nearby bench, the lovely lady even let me into the secret of the answer to the puzzle in case my herd family hadn't worked it out by the time they reached the middle.
No - I'm not going to spoil the surprise - and in fact the children did work it out! 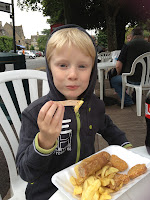 Hungry after all their maze-busting we headed back into town. They spent their earnings from singing at a wedding the day before (yes, we are a bit like the Von Trapp family) in the old fashioned sweetshop then we took over a couple of outdoor tables at a chip shop for a budget lunch. Early as usual - we learned from experience that when you have a large family you eat early or late or standing up!

It was a fabulous day and as I type they are playing Hide and Seek in the cottage while DH has a well-earned snooze. In a minute I shall rifle through the shopping bags and make a slap up tea with lots of treats we don't normally enjoy like milkshakes and chocolate biscuits.
The whole day including lunch, the maze and treats has cost under £50 for 7 of us which proves you really can have lots of fun on a tight budget.

Disclaimer; I was not paid to write this post and we paid for admittance to the Dragonfly Maze ourselves. Views are my own. 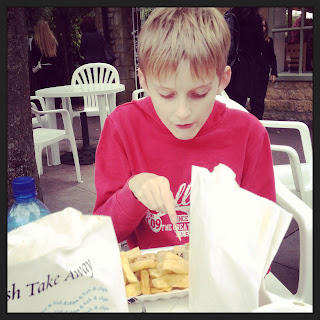 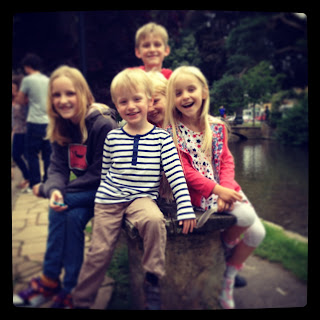