on September 11, 2013
I don't know what possessed me. It was stupid but I did it anyway. I decided to dye my hair whilst simultaneously getting 6 children up and ready for school. 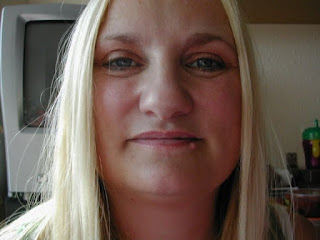 This is how it went.

7.15am - checked out my reflection in bathroom mirror. Arrgh! Who is that haggard old woman with more roots than a tree staring back? Hang on - let me get my specs. AAARGH!

I had a box of blonde just waiting for me to hit crisis point. As seen on TV with the happy smiley wrinkle-free woman gently massaging a lovely scented non-drip, easy to apply product into her barnet.
The idea of not being suffocated by chemical fumes appealed so I picked up the brand ready for re-blonding.

Checked instructions. Normally I use the same brand every time so can tart up my colour at speed and with no hassle apart from the smell. Good job I checked instructions on new product as it was slightly different.

I had to add two products to the pretty, bulbous bottle and shake. The box had a push-out bit to balance the bottle in. Felt a bit Blue Peter converting box into tray but didn't want to risk spillage.

Put on gloves apparently designed for someone who used to be a man. Decided against recommended old towel round shoulders - has anyone ever managed to keep the towel on throughout hair dying process when doing it themselves? Chose to wear sweatshirt belonging to DH which I hate in the hope I'd achieve lovely blonde locks and an excuse to throw out dye-stained horrid chavvy jumper.

So - time to mix. Combine flappy gloves with early hour and fiddly pouring task - cue drippage even with the  box in bottle balancing mode.

Wiped up drips, picked up bottle to shake - some product residue still on outside of bottle which due to pretty bulbous shape went squittering out of my slimy hands into air and onto bath mat. Luckily lid still on.

Now attempting at some speed to follow instructions to cover roots. Teeny tiny opening meant creamy stuff not keen to come out - resorted to squeezing mix into hands and slopping it all over, rubbing it into scalp. Making bottle even more slippery resulting in part hair dye, part juggling act.  All while shrieking about shoes and PE kits at kids who were downstairs ignoring me.

First part done - downstairs, timer on, more shrieking. Made packed lunches which may or may not have some degree of drippy hair dye incorporated. Well, it makes a change from mould on the bread.
All done, time for a small bowl of something breakfasty plus a sneaky 3 minutes of Candy Crush. Bogging Level 102 - I'm going to be stuck on that forever!

Upstairs. Another squint at the instructions. Spread through rest of hair. But cream (and my hair) seems to have taken on an odd colour and texture so it was like spreading play dough onto straw. Hmmm. Carry on regardless.

Another ten minutes to kill. More "Fish Wife" impressions from me, this time regarding shoes and bags and front doors. Getting a bit close to the time we usually leave now - so much for the 30 minutes it's supposed to take - we are getting on for almost an hour now.

Emulsify? What now? Oh, add water and rub a bit. I can do that.

Now. "Add a hazelnut-sized amount of conditioner." WTF?  Is that an internationally recognised size? I have no idea how big a hazlenut is. A picture of the weird squirrel thing from Ice Age flashes through my head. IS that nut he holds a hazelnut? - Oh nope, that's an acorn. Well, it's a bit like a hazelnut I guess so squeezed that amount out. And doubled it. And doubled it again.

Finally, conditioner rinsed off I comb and peer into mirror. Thankfully despite all the mishaps the product seems to have eliminated both roots and grey hairs as advertised! And once again, at a glance or in poor light I can pass for 25. Ok, maybe 35. Well, alright, early 40's.  But less tired than I normally look. Hurrah!