on September 03, 2013
My youngest son started "big" school today and as I dressed him in his uniform and packed his lunch  I was pleased to see he was very relaxed about the whole thing. 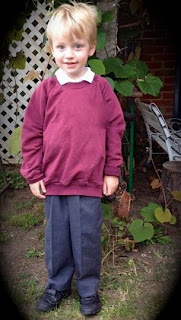 I'm not surprised really- I've been walking that route to the local primary school for 15 years now so the last five children are very used to coming along on the school run.

My 17 year old son told me he remembers fragments from preschool but doesn't actually remember his first day at primary. I should be glad - it obviously wasn't a traumatic experience for him!

I had two first days at primary school. At first I attended a school was an imposing Victorian red brick building. I don't remember but am told my first day didn't go well as I was "caught" reading. And since I hadn't been taught to read by the school yet they didn't want me to read.

I do remember a conversation I had with another girl in the toilets of that school. I remember so vividly the acoustics and the smell and I guess it was break time or lunchtime because I remember it was crowded.


I was desperate to make friends - would have said anything to impress- and when one girl asked me if I had a pony of course, aged five, I said yes! Then the smart arse little cow asked me what colour socks it had.

Obviously, since I didn't have a pony (and in retrospect I doubt anyone at that school did!) I didn't have a clue what she was talking about. I thought she meant "lose one in the wash" type of socks. I glanced down at my own feet and decided to go with what I was wearing. "Red" I answered her boldly.
This of course was not the right answer (horse socks are generally white markings on legs which look like socks!) and so began a lengthy period of being the odd girl who didn't quite fit in.

Luckily my parents agreed that I didn't fit in to that school and I soon joined my cousins at their primary school. A modern built building with loads of light and what felt like an enormous playing field.


I say I joined my cousins. I can remember my mum assuring me they would meet me in the playground on my first day there and help me settle in. Of course they were far too interested in playing with their friends and did not want their little cousin tagging along.

Despite the shaky start I was much happier there and have lots of great memories including the time we saw the GoodYear blimp fly slowly and majestically over the school.  And another magical memory when it was raining in half of our playground and sunny in the other - we ran backwards and forwards between the two amazed at the phenomena.

As I type it's 2pm - only one more hour before I walk up to fetch my youngest and his brother and sister. I strongly suspect I won't get much out of him about his first day but hope its the start of happy school days he can look back on with fondness.