A mobile phone with a difference

on October 02, 2013
My house is a tangle of chargers. Chargers for cameras, games consoles, the sat nav, electrical toys and tools and of course, mobile phones.

I loved the idea of a mobile phone decades ago when they were still new and I was very proud of my  "brick" phone with a pull out arial. As a journalist often out and about alone on a "patch"  that covered two counties it was really useful to know if I broke down or needed to call back to the office for any reason I could.

Since that first phone I have had clam shell phones, sliders, a myriad of Swedish phones and for the past few years I have followed the herd in waiting eagerly for the latest updated version of my smartphone. Whatever you call it in your country - cellphone, handy, moby - I love them!

DH has progressed from basic phone to smartphone and since we are both phone addicts it's no surprise that most of our children are keen to have their own phones.

So that led to the modern mother's dilemma - how young is too young? We started off with the older children letting them have mobiles when they started secondary school. They had to get a bus to the next town and it seemed sensible for them to be able to get in touch if they had a problem getting home, or wanted to go to a friend or Heaven Forbid, got a detention.

DS#2 actually detests mobile phones and we have to insist he takes one with him when he's out. Mostly he "forgets" it and I end up calling or texting his incredibly tolerant friends to find out his whereabouts.
DS#1 on the other hand is as obsessed with his phone as his mother and it is pretty much moulded to his hand, day and night. It is so cracked and chipped it's amazing it still works

DS#3 looks after his prized hand-me-down smartphone with the nurturing gentle touch you usually reserve for a newborn baby. So it's still in one piece and is likely to last until the makers release one update too many for its elderly electronic brain and it become obsolete.

Our 12 year old has a cheapy pink thing she loves but regularly loses. It never has credit since the minute I load it she has long text conversations with her friends and I refuse to top up again. But at least when she does have it I can call her.

We succumbed to our 8-year-old's frequent requests for a phone simply because we found a nice, basic phone in our local supermarket for £8 and we figured even if he just used it to listen to music and take pictures it was a bargain. It hasn't had credit for aged but he doesn't seem to have noticed.... 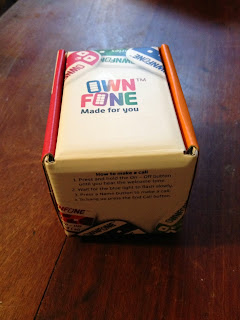 When he got his phone this year his little sister, aged 7, was very envious and although we gave her an old phone with no sim she was not placated. And when her friends started getting phones it was getting more and more difficult for her to understand our arguement that since she didn't go anywhere without us or a bigger sibling she didn't need one.

But since when has life been all about need? I have things I wanted but didn't need so when the lovely people at OwnFone offered us a 1st Fone personalised handset and a months trial free we relented and let her go online to design her very own phone.

It was such fun! Loads of different options for the keypad - you can choose names or images, from 2-12 contacts and the phone will only ring the numbers you choose! We chose obviously home, mummy and daddy, her Godmother and a selection of siblings.

Then she went on to choose the phone's design. So many to choose from! She was quite taken with some of the more girly options but thinking ahead for Grumpy toddler I talked her into a gender neutral red parrot pattern which she is delighted with.

When it arrived just a few days after ordering she couldn't wait to open the box. It was packaged as nicely as the top luxury smart phones in a very cool box which displayed the phone while hiding the charger and carrying strap. 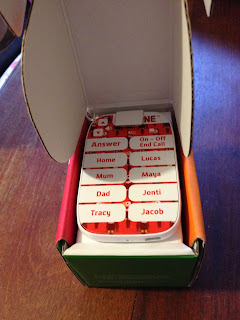 The carrying strap by the way is a great idea. The phone itself is sort of thick credit card size and very lightweight and comes with a strap matching the phone to wear like a necklace or ID badge with a safety release to avoid accidental strangulation. I like the thought that if we go out for the day my daughter can wear her phone under her coat or jumper and if we lose her she can call us. We've only ever "lost" one child - DS#2 in Disneyland Paris -and even the memory of it still makes me feel sick.
She of course loves it and has already called all of us several times while we are still in the room with her. I thought at 7 that maybe it might already be too young for her but she has proudly shown it off to all her friends who all seemed impressed - even the one with her own Blackberry!

Showing it to my friends they all said the same thing - this would be great for elderly people! And luckily 1st Fone are way ahead of them and have a range with designs more suited to adults. They also do a range for any adult who wants a simple, no-fuss phone - maybe for work or to use instead of their work phone which might continue to demand attention to emails, texts and calls when you want to switch off.
I like the safety aspect of the phone - DS can only call the people listed. Youngsters today communicate a lot by text - obviously you can't do this on the 1st Fone -but I'm quite happy about that. 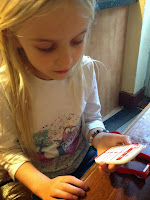 There are lots of designs suitable for older children and I think the phone would be perfect for them to slip into a school blazer pocket for that emergency call home. Low risk of theft and no chance of your child accessing the internet unsupervised or being distracted from  work or enjoying a proper break in between lessons by the lure of the more complex mobiles.

You buy the phone outright (prices start at £40) and can choose from a variety of PAYG or contract airtime plans all of which seemed very reasonable to me. For example you can buy a phone and have 50 mins of calls each month for a whole year for an all in price of £110! 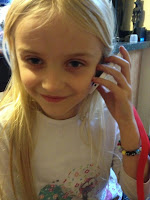 I did think DD might think it was too basic since her siblings and some friends have the more familiar models you see in phone shops but I have to say she surprised me with how happy she is with it, maybe partly because she designed it! And her younger brother has already made sure we know that when she finally insists on a phone that sends texts that he wants the lovely parrot phone!

Disclaimer: I received a 1st Fone and one months airtime free for the purposes of this review. Views and Opinions as ever remain my own.  Click here for my full disclosure policy.