Priscilla Queen of the Desert.

on November 25, 2013
The list of my favourite films is very short. I don't get much time to watch TV, never mind sit through a whole film without having to baste the dinner, fetch a drink for a small child, listen to an urgent anecdote about something the cat just did from an earnest little one…..

On my list is, of course, Mamma Mia. I have been an Abba fan since primary school (which was a long time ago!) and the combination of images of Greek sunshine and my favourite songs was always going to be a winner.

The Birdcage is another fave - OK predictable and maybe a bit corny but I love the theme of love plus there's beautiful men in drag which I never can resist.

Dirty Dancing, predictable because I am 40-something. I remember going three times in a row with my new friends from Uni. My fondness for the film is more about my memories of the era than the actual film. Altogether now:"Nobody puts Baby in the corner…."

The King and I. I want that dress. And The Sound of Music. Which made me want to be a nun for a while. Obviously that didn't pan out. Though I figure if I had been a nun I would definitely have been a cheeky, disobedient singing one.

And finally, The Adventures of Priscilla, Queen of the Desert. Great music, gorgeous men in drag (I'm not going to examine that obsession too closely if you don't mind), comedy, love….. it has everything I adore in a film.

And just weeks after finally seeing the stage version of Mamma Mia, this week I got to see the stage production of Priscilla, Queen of the Desert at the Waterside Theatre in Aylesbury ( which is a great new theatre BTW).

Downing coffee and cake with my friends (for a change) some months back I noticed that the musical was touring and that it would be within a stones throw of our village. I was beside myself with excitement. My bemused (younger) friends who had never seen the film were doubtful at my animated description of the plot but being used to me and tolerant of my madness agreed to come along for a girly trip to the theatre.

I made them watch the film which helped them to get a bit more idea though I was worried they didn't love it like I do. But their enthusiasm was helped along when they found out Jason Donovan was going to be playing "Tick" at Aylesbury! 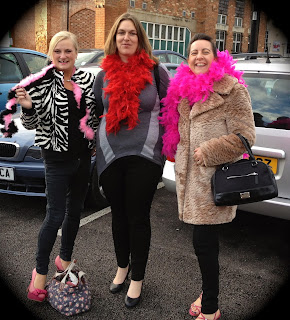 Now as I've said my friends are used to my eccentricities so took it very well when I sent them a text  on the morning of our trip to ask if they'd mind wearing feather boas. And they didn't bat an eyelid when I picked them up wearing my infamous mock zebra-skin jacket and pink platforms. They just seemed relieved I'd decided against the tiara.

We were a bit worried when we arrived at the theatre and realised that most of the rest of the audience appeared to be white-haired and wearing anoraks in varying shades of beige. There were not many fabulous shoes - but lots of very comfy looking footwear. There was a queue for the lift. Hmmm. I was hoping for a lot of audience singing and dancing. I wondered if they knew what they had signed up for. 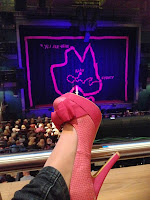 But I needn't have worried. The elderly lady next to me (on the front row of circle 1 - fab seats!) was chortling along at even the naughtiest of jokes - reminds self - don't judge a book by it's cover!

What can I say about the show? Awesome. Glittering. Cheeky. It totally lived up to my expectations and exceeded them. I hesitate a little here but I think, I think it was actually even better than Mamma Mia.

And Jason? Well I saw him donkey's years ago in Joseph's Technicolour Dreamcoat (and of course in Neighbours) and I reckon he's a better singer, actor and performer than then. He is a great performer you can't help but develop a little crush on him.

We tottered out of the theatre shedding feathers and feeling star struck. I am even more determined than when I peg it my friends and family have to wear drag-style outfits to my funeral and my friends have promised to try and organise a song and dance routine round my coffin a la Priscilla. But maybe without the bare bums. No, I'm not going to explain. You just have to go and see it for yourselves!